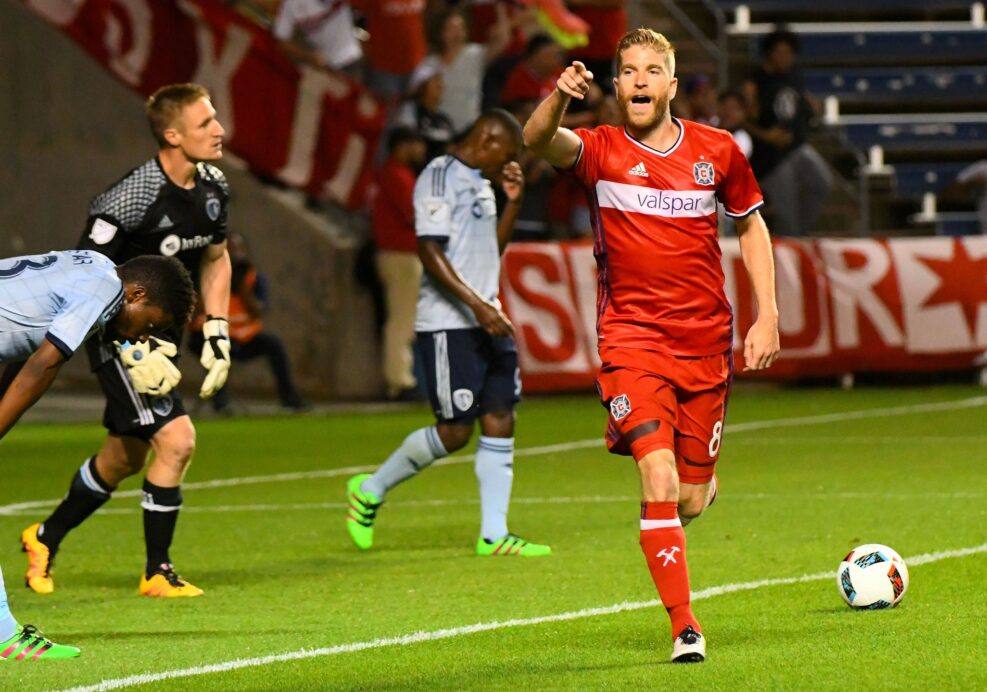 BRIDGEVIEW, Ill. – Sporting Kansas City did nearly everything right offensively on Wednesday against the Chicago Fire. The visitors kept 67 percent of the possession, completed twice as many passes and outshot Chicago 19-3, but time and time again couldn’t find the most important, final piece of the offensive puzzle.

The Fire, on the other hand, made the most of its few opportunities (three total shots, two on target) and walked away with three points.

Fire forward Michael de Leeuw marked his first start and first home match with his first MLS goal. The Dutchman’s 19th minute tap-in was the difference as the Fire held on for a 1-0 win at Toyota Park.

The win moves the Fire out of last place in the Eastern Conference on goal differential and snaps a five-game unbeaten streak for Sporting KC.

“The whole game I think we battled, we showed we can withstand the test of time in a game,” Chicago goalkeeper Sean Johnson said. “Once you get the goal you always look to get the second, but there comes a time in the game where the team is going to push numbers forward and I thought everybody dug in tonight and it was a complete team performance.”

Kickoff was delayed nearly two hours by lightening, rain and high winds, but Sporting KC dominated the early going and De Leeuw’s goal came on the Fire’s first shot of the match.

In the 19th minute, Fire defender Brandon Vincent used a quick restart in midfield to put Cocis in behind the defense on the left side of the box.  He slipped a cross to de Leeuw for a close-range finish and a 1-0 lead despite Sporting KC’s protests to the referee about the whistle on the restart.

“If you can score in your first home game that’s always great,” de Leeuw said. “Now I have one goal but it was– I couldn’t miss that one. … Raz gave me a perfect goal so it was a perfect assist and yeah it’s good.”

While the Fire made the most of its one first-half shot, Sporting KC was left frustrated by its numerous missed chances.

It took the visitors all of 90 seconds to put the ball in the back of the net but the assistant referee’s flag ruined their dream start. Dom Dwyer headed in a perfectly bent Benny Feilhaber free kick but he was ruled offside.

In the second minute of first-half stoppage time, Jacob Peterson beat Johnson but the post kept his shot out and left the Fire’s lead intact at the break.

The Fire defended with 10 men, everyone but de Leeuw, behind the ball for most of the second half and tried to hit on counters. Chicago eventually got its second shot of the game in the 58th minute when David Accam forced a save from Tim Melia. Khaly Thiam had a shout for a penalty in the 73rd minute when he went down challenging for a corner, but the referee waved him off.

Otherwise, the second-half belonged to the visitors as they kept 72 percent of the ball and took 13 shots after the break.

Johnson made two big saves in the final 10 minutes, stopping a Brad Davis free kick and getting down to deny a goal-bound header.

Davis nearly saved a point for Sporting KC with a stoppage-time free kick from the top of the box, but while Johnson was stuck flat footed, the ball curled just off target.

“It’s disappointing when you play so well,” Sporting KC head coach Peter Vermes said. “You play away from home – you expect when you come into somebody else’s place that they’re going to drive the game. We came in here and drove the game today. It’s not just possession, we were in and around their box for I don’t know how much of the game. They had three shots on goal. We were all over from them, again, being away from home.

“So from an effort perspective and everything, I’m disappointed for the players because everything they put in and then for the game to go the way it did, based on the decisions. The decisions were unfortunate, it takes away a lot of hard work that the guys put in.”

Sporting KC put the ball in the net less than 90 seconds into the match, with Dom Dwyer heading in Benny Feilhaber’s free kick, but it was called back for a narrow offside call.

Arturo Alvarez was a step behind the rest of the attack, completing just 50 percent of his passes in the first half and he was subbed off in the 68th minute after picking up a yellow card.