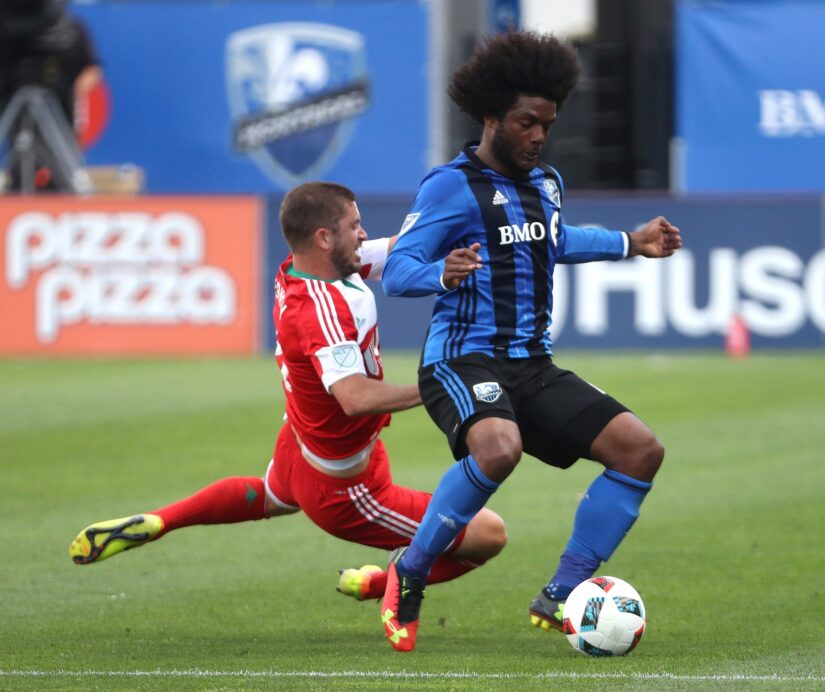 An unexpected hero powered the Montreal Impact back from a two-goal deficit to defeat the New England Revolution on Saturday.

Rookie Michael Salazar bagged a brace in the first start of his career to equalize the match before Ignacio Piatti’s penalty handed the Impact a 3-2 victory at Stade Saputo.

The Revs burst into the lead early in the contest as Kei Kamara made a nice run between a pair of defenders to latch onto a Kelyn Rowe pass in the 15th minute. The goal was the first in league play for the Sierra Leone international since his arrival from Columbus.

Kamara struck for his fourth tally of the season against the Impact in the 33rd minute to put Jay Heaps’ men ahead by two. However, that lead would not last long.

Salazar, who played 29 minutes in five substitute appearances before Saturday, knocked in the Impact’s first tally in the 40th minute after a bad clearance off the boot of Jose Goncalves.

The 23-year-old rookie from UC Riverside leveled the match at two goals apiece four minutes after halftime. Salazar used his chest to control a Hassoun Camara cross before he slotted the ball past Brad Knighton.

The game was not tied for long as the hosts earned a penalty in the 52nd minute. As Ignacio Piatti darted into the left side of the box, Knighton reached out his right hand and knocked down the Argentinian playmaker.

Piatti stepped to the spot to deliver his spot kick into the left side of the goal past a diving Knighton. The strike was the 10th for the season for the attacking midfielder, who has achieved the mark in 15 matches.

The Impact will return to the pitch a week’s time on the road at Real Salt Lake, while the Revolution host Columbus Crew SC at Gillette Stadium.

Michael Salazar, who rarely saw the pitch in the first four months of the season, replaced the impact of Didier Drogba at forward with the first two goals of his MLS career.

Brad Knighton’s penalty concession in the 52nd minute handed the Impact a chance to move into the lead a short time after Salazar opened the second half with his second tally.

It was not a good night for either defensive unit, but Brad Knighton had the worst night of anyone in the back as he was beaten twice and his poor challenge on Piatti gifted the hosts three points.