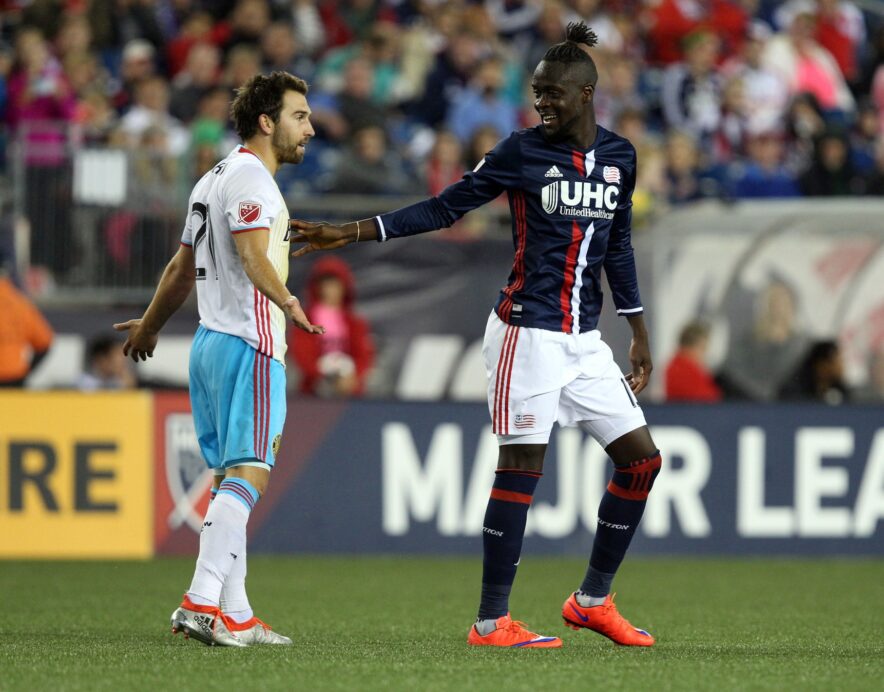 New England Revolution forward Kei Kamara was itching to score against the team that jettisoned him in May coming off of an MVP finalist season in 2015.

After working hard and coming up empty all game, Kamara pounced in the 71st minute when Revs teammate Teal Bunbury went down in the box and the Columbus Crew defense gave up on the play, allowing their former teammate to swoop in and cap off a 3-1 Revolution home win.

“Even though we had a loss in D.C. and a loss in Montreal, I think Wednesday was the real gut punch because we were at home,” Revs coach Jay Heaps said. “We really had to rally and get ourselves ready for tonight, but that’s the mindset at home. You have to come out and throw the first punch.”

Lee Nguyen put the Revolution in front in the third minute after two Crew defenders challenged Kei Kamara for a header and the ball bounced out to Nguyen at the edge of the box. He settled and sent a shot past goalie Steve Clark into the upper left corner to make it an early 1-0 advantage.

Kamara sent a centering pass into the box to Kelyn Rowe in the 34th minute, but Crew midfielder Will Trapp got there first and inadvertently scored an own goal to make it a 2-0 Revs lead.

Crew forward Ola Kamara scored his eighth goal in the last six matches to draw it back to a 2-1 game in the 42nd minute, making a run off the ball to latch onto a long through ball from Tony Tchani to finish by the left post before center back Jose Goncalves could close him down.

The Revs broke out of a three-game losing streak and will look to build off their win next Saturday against Real Salt Lake, while the Crew have a tougher task, needing to bounce back for a midweek game against Toronto FC.

Between the two, Kei and Ola Kamara managed nine shots, but it was ultimately the Revs forward who had the more impressive night. Kei Kamara totaled five shots, scored against his old team and played a part in all three New England goals.

Lee Nguyen is still the engine that makes the Revs offense go, and he provided the early lift they needed with a well-take third-minute goal to snap out of a four-game scoring lull. After the entire team managed just one shot on goal in a midweek game against New York City FC, Nguyen’s early tally helped the Revs offense get back in rhythm and had them playing from in front.

It’s easy to blame the goalie on a night like this, but this is probably a game Crew defender Chad Barson would like to scrub from his memory. Barson went chasing Kamara instead of staying on Nguyen in the lead up to the first Revs goal and he was also caught standing there instead of clearing the ball away when Kamara took advantage and put the game out of distance.