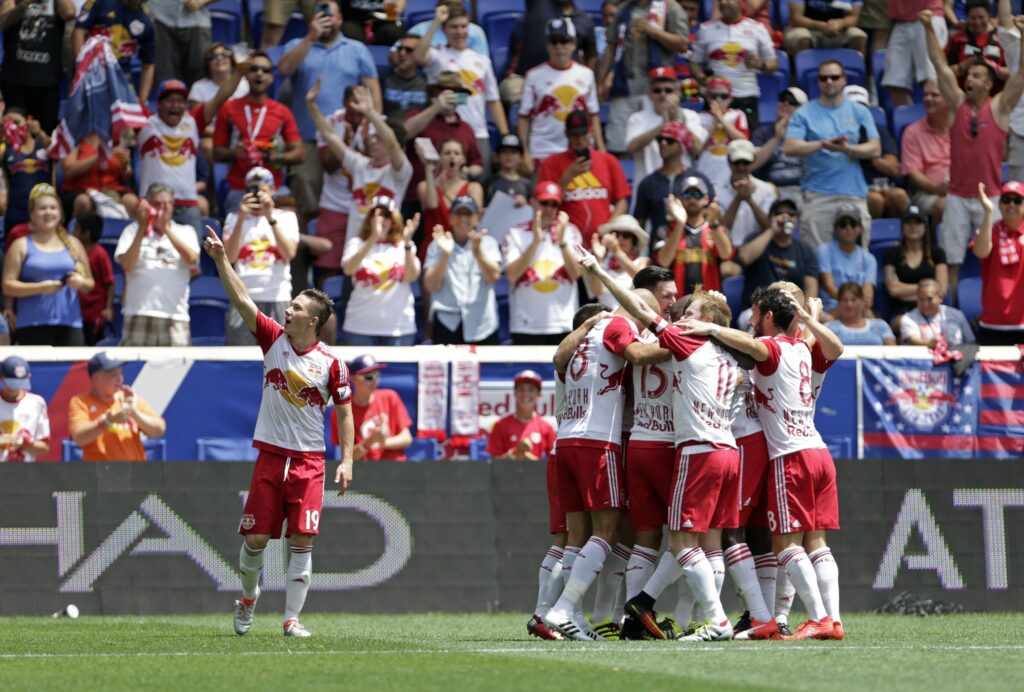 HARRISON, N.J. — It wasn’t quite a 7-0 demolition, but the New York Red Bulls solidified their place as the area’s top dogs with yet another resounding defeat of New York City FC.

Led by Sacha Kljestan and Bradley Wright-Phillips, the Red Bulls swarmed NYCFC en route to a 4-1 victory on Sunday at Red Bull Arena. The win pushes the Red Bulls within two points of their local rivals, who remain top of the East despite Sunday’s loss and a minus-four goal differential.

The Red Bulls fired the first pair of bodyblows within the span of three minutes, with Kljestan setting up two goals just moments apart.

It started with a finish from Wright-Phillips. Following a series that saw NYCFC unable to clear its lines, Kljestan fed the English striker by splitting a pair of defenders, setting Wright-Phillips up for a far-post finish and a 1-0 scoreline.

Just three minutes later, Kljestan earned another assist, his 12th of the season, by finding Ronald Zubar with a corner kick. The French defender thumped a header past Josh Saunders to push the lead to two.

Just before halftime, it was three, as a 40th-minute handball gave the Red Bulls a penalty kick. Kljestan stepped up and buried the ensuing spot kick for his fifth goal of the season.

A Tommy McNamara wonder goal just seconds later pulled NYCFC back within two, as the winger’s long-range stunner gave the visitors life heading into the second half.

As tired legs took hold, Wright-Phillips iced the game in the 70th minute with his second goal of the match and eighth in six games against NYCFC.

Much like the temperatures, tempers flared throughout the match. NYCFC head coach Patrick Vieira was sent to the locker room shortly before Kljestan’s finish, leaving the visitors without their leader throughout the second half. Meanwhile, players found themselves in several shoving matches, but the confrontations never escalated to anything more until Ethan White was dismissed late for a hard foul on Gonzalo Veron.

It proved the closes NYCFC would every come to truly touching the Red Bulls, who cruised to a victory ahead of next Sunday’s clash with the Chicago Fire. NYCFC, meanwhile, will be in search of a bounce-back performance at home against the Colorado Rapids that same day.

Sacha Kljestan proved undefendable throughout the first half. The Red Bulls midfielder fed Bradley Wright-Phillips on the opener before assisting Ronald Zubar’s header moments later. A goal of his own soon followed, solidifying a major victory and Man of the Match honors.

Wright-Phillips’ goal got NYCFC started, but Zubar’s finish truly demonstrated exactly how Sunday’s match was going to go. Even with McNamara’s finish, it never looked like NYCFC was going to climb back from the early deficit.

The legend of Jack Harrison has grown exponentially over the last month or so, but the rookie was nowhere to be seen on Sunday. Static throughout the match, Harrison popped up occasionally from an offside position and never truly found his way into the game.