Kreis faces challenges with Orlando City, but has pieces to make it work 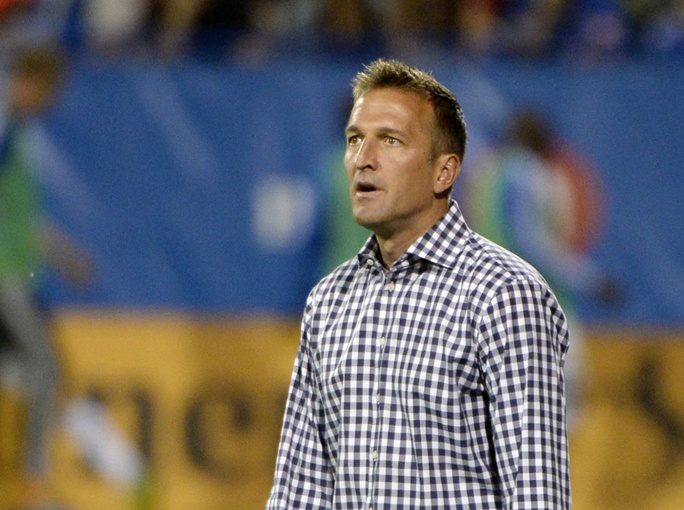 Jason Kreis already finds himself in elite company. One of just 13 coaches to have led a team to an MLS Cup, Kreis is already regarded as one of the brightest minds in American soccer for his achievements with Real Salt Lake.

However, after a trying spell with New York City FC, Kreis is set for another challenge: rebuilding an Orlando City team in need of a major change. That challenge could catapult him into pantheon of American soccer minds, or could serve as yet another blemish on a resume that looks just a bit bleaker than it did several years ago.

Entering Kreis’ tenure, Orlando City is a step above broken. The Lions have won just twice since the first week of April and currently sit eighth in a crowded, but middling, Eastern Conference. Yet, for all of their faults on the field, Orlando’s biggest missteps have likely been off of it, as front office reshuffling gave the team a calamitous start to their sophomore MLS season.

Kreis is very familiar with dealing with a high-profile front office. After succeeding at RSL with the perfect running mate in Garth Lagerway, Kreis never seemed to click with the minds at NYCFC. A stay at Manchester City was used to get Kreis in-tune with the City way, but it never manifested itself on the field as NYCFC sputtered throughout their debut season.

Make no mistake, Kreis is not the sole party deserving of blame regarding the issues of last season’s NYCFC. Saddled with a defense that was lackluster and a slew of midfield pieces that never quite fit his desires, Kreis was jamming square pegs into round holes all season and, in the end, it became easier to dismiss the coach than dismiss the assets he was charged with making useful.

Now, a year later, Patrick Vieira has taken that NYCFC team and built it into a contender. Does Vieira have a much better team to work with? Certainly. Kreis was never given a Jack Harrison to lead the charge, and defensive additions have taken the team from porous to somewhat competent. Still, Vieira’s success is a slight knock against Kreis, even if the two were placed in different situations.

It’s difficult to compare the challenge of assembling an expansion team with the challenge of rebuilding a club in disarray, and it remains to be seen just how much power Kreis will have in that rebuild now that he has taken charge of NYCFC’s expansion sister.

If Orlando City gives Kreis the pieces required, the head coach has shown his ability to create something special. Given the budget at RSL during his stay with the club, Kreis still deserves infinite credit for building what was, at the time, a small market, no-name club into a legitimate powerhouse.

Kreis will have much more to work with at Orlando City, but the question remains how he will be allowed to go about doing it.

On the field, Kreis has, generally, stuck to his beliefs. The veteran head coach has long been a believer in the diamond midfield, a system that worked so effectively with Kyle Beckerman, Javier Morales and Will Johnson marshaling the team. His pieces at NYCFC never quite allowed the system to flourish, producing constant shuffling as the season wore on. Now at Orlando, Kreis does have some interesting puzzle pieces to work with should he stick with his preferred system.

Throughout their MLS tenure, Orlando City has generally stuck to a one striker set, a system that makes sense given the talents of Cyle Larin. Julio Baptista, who has shown well throughout the season, makes sense as a potential strike partner, with Kaka taking on the tip of the diamond when healthy. Antonio Nocerino, Cristian Higuita, Kevin Molino, Darwin Cerén, and Servando Carrasco can all fit into the diamond formation, allowing Kreis options to find his best unit. Carlos Rivas, a natural winger, would need to shift up top or accommodate to an unfamiliar central role.

Still, questions remain. How does Kreis see Brek Shea, who has played at both fullback and winger this season? Can Orlando City’s centerbacks step up for a team that has conceded the second most goals in the Eastern Conference? Can Kreis rectify the team’s issues in time to make a push for the playoffs in a weak East?

By accepting the job, Kreis likely has some sort of power when it comes to personnel decisions, as a coach of his caliber has the reputation and clout to demand that from most potential suitors. Moves can be made, and if they aren’t made immediately, Kreis does have the pieces required to at least begin a playoff push.

However, in order to retain the reputation built throughout his RSL tenure, Kreis will have to once again demonstrate the features that mad him earn it in the first place. Following a trying period with NYCFC, Kreis is in need of a success. Orlando City presents him with a challenge, but one that very much has the makings of another positive mark on the resume of one of America’s most highly-regarded coaches.