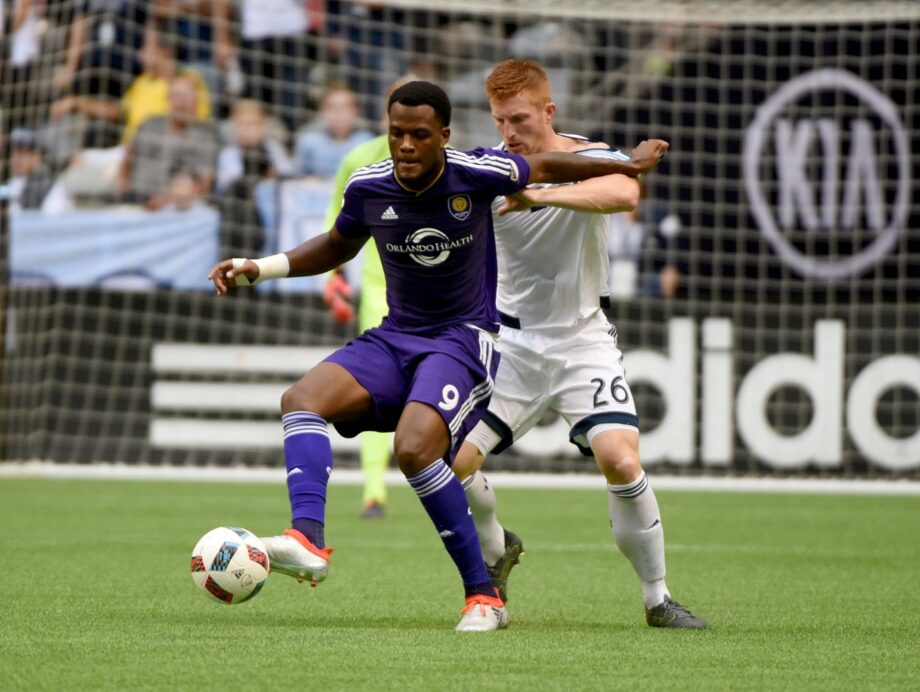 Orlando City battled back from a halftime deficit to earn a valuable point at BC Place against the Vancouver Whitecaps on Saturday night.

Cyle Larin’s 50th-minute strike allowed the Lions to earn a 2-2 draw with Carl Robinson’s Whitecaps, who came back from a one-goal deficit of their own in the first half.

Orlando burst into a surprising lead in the 14th minute as Julio Baptista sent a shot through the legs of David Ousted and into the back of the net.

The visiting Lions controlled the possession battle for 10 minutes after the opener, but the Whitecaps grew into a rhythm near the middle of the opening frame.

Masato Kudo caused trouble in the Orlando box one minute before the equalizer as his cross was parried away by Joe Bendik into a slew of players in the penalty area.

In the 35th minute, Kudo’s shot from the right side of the box produced a save out of Bendik that sent a rebound over to Nicolas Mezquida, who easily headed in the Whitecaps’ first tally of the night.

The hosts struck for a second through Kudo in the 43rd minute as the Japanese forward powered in a Pedro Morales free kick at the left post.

The match almost went into halftime tied, but Ousted denied that from happening with a terrific save of a Cyle Larin shot in which he pushed the ball over the bar.

Larin pulled the Lions level four minutes into the second half as he leaped above Tim Parker to connect with Kevin Molino’s cross from the left wing. The goal was the ninth of the season for the Canadian striker.

The Lions received a perfect chance to move into the lead once again in the 60th minute as Baptista earned a penalty on the left side of the box against Jordan Smith. However, the Brazilian skied his spot kick high over the right side of the bar and into the stands.

Ousted sprung into action one final time in the 88th minute as he used his left hand to stop David Mateos’ header off a corner to preserve a point at home.

Orlando will be back in action in a week’s time when it visits Columbus. The Whitecaps will visit Houston on the same night.

Masato Kudo was a live wire in the Whitecaps attack during his 83 minutes on the pitch. His shot produced the rebound that led to the first goal and he netted the second tally.

Julio Baptista’s missed penalty could’ve swung the momentum into Orlando’s favor and he would’ve put the Lions in the lead with 30 minutes to go. Instead, the second-year side left BC Place with a point.

Joe Bendik’s rebound created the first goal scored by Mezquida and he was caught out of position on Kudo’s header in the 43rd minute. The Orlando City goalkeeper was active in his own box, but he only contributed a pair of saves.