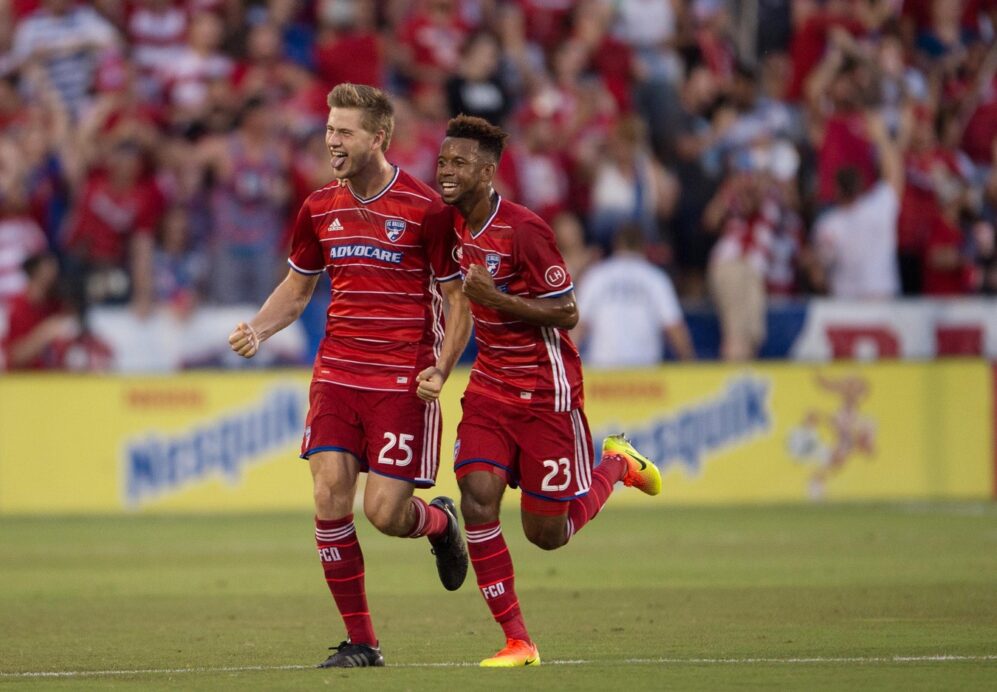 The MLS season is just about halfway over, and several teams have made major statements recently to legitimize their candidacy as MLS Cup contenders.

Leading the pack is FC Dallas, which thumped Orlando City, 4-0, last time out, prompting the dismissal of Lions head coach Adrian Heath. In the East, NYCFC has emerged as the dominant presence, winning four straight to assume the top spot in the conference.

While several teams continue to roll, other contenders have floundered. Both the Columbus Crew and Seattle Sounders remain in a funk, and will be hoping for a midsummer shakeup to ignite a push towards the postseason.

OUTLOOK: FC Dallas has won five of their last eight, but Monday’s destruction of Orlando City was by far the most impressive. When the attack is ticking, FC Dallas might just be the league’s best team, and their status as the West’s top dogs on the table certainly adds some backing to that claim.

OUTLOOK: Tim Howard’s debut may not have yielded a win, but the Rapids continue to roll out West. A draw against the reigning MLS Cup champions remains a solid result, one that keeps the Rapids among the conference’s, and the league’s, elite.

THIS WEEK: at New England Revolution on Wednesday; at Sporting KC on Sunday

OUTLOOK: A pair of statement wins for NYCFC, who now sits top of the Eastern Conference after toppling their local rivals. Rookie Jack Harrison has shined throughout the club’s four-game win streak, and it appears NYCFC has a bit of momentum going heading into the season’s second half.
————————-

OUTLOOK: The returns of Robbie Keane and Gyasi Zardes have certainly helped the Galaxy find a bit of form. With injuries, suspensions and international absence causing the season to be a bit of a rollercoaster ride, the Galaxy remain firmly in the Western Conference picture, and could be set for a bit of a run with everyone back in the fold.

OUTLOOK: The Timbers are quietly unbeaten in six following Monday’s draw with the Rapids. Leading the way throughout the run is a now-settle defense, a unit that has posted a pair of shutouts in its last four.

OUTLOOK: The forward position remains a concern following injuries to C.J. Sapong and Fabian Herbers, but even a loss to the Dynamo isn’t enough to bump the Union out of a top spot in the East. The loss on a last-second goal by former Union midfielder Cristian Maidana was a gut-punch, but the Union can get right back
———————–

OUTLOOK: An incredible turnaround from the Impact, who scored three unanswered to snatch a spectacular win over the Revs. Third in the East with a pair of games in hand, the Impact are in a good spot, but need to improve defensively going forward.

OUTLOOK: A road swing has seen the reigning Supporters’ Shield champions suffer, as four straight losses in all competitions have hurt the team’s confidence. A derby loss to NYCFC serves as a new low, as the Red Bulls need to regroup a bit ahead of a return home against the reigning MLS Cup champions.

THIS WEEK: vs. NYCFC on Sunday

OUTLOOK– The win over the Crew was a much-needed one, as Sporting KC looks to stay in contention in the West despite a porous home record. The returns of Graham Zusi and Matt Besler should help, but Sporting KC needs to step up to compete in the pressure cooker that is the Western Conference.
————————-

THIS WEEK: vs. the Chicago Fire on Saturday

OUTLOOK: Sebastian Giovinco has hit a bit of a rough patch, and the absences of Michael Bradley and Jozy Altidore have really taken their toll on TFC in recent weeks. Without their DPs, TFC is still an okay team with players like Jordan Hamilton stepping up, but okay won’t be enough to earn wins throughout the summer.

OUTLOOK: Octavio Rivero is officially gone, meaning the Whitecaps are likely set to bring someone in during the summer transfer window. It will be a needed addition, as the team has lost three of its last five while grabbing just four points.

THIS WEEK: at FC Dallas on Friday

OUTLOOK: With their backline all but depleted, the Earthquakes are in trouble, as evidenced by a 1-0 loss to the Fire. A matchup with FC Dallas does not bode well for a team that faces a challenge to remain in contention throughout the summer.
————————-

THIS WEEK: at Sporting KC on Friday

OUTLOOK: Bill Hamid has been on another level since returning to the fold, and D.C. United has responded with much better results. They still remain middle of the pack, but it appears that D.C. is on their way up.

OUTLOOK: A brutal, brutal week for the Revs. After surrendering three straight goals to cough away a two-goal lead against the Impact, the Revs failed to score a goal of their own in a 1-0 loss to NYCFC. The pair of losses undid any momentum earned with the two wins prior to them, and the Revs look like they’ll have some major work to do to remain in contention through the summer.
————————

THIS WEEK: vs.Houston Dynamo on Friday

OUTLOOK: An embarrassing loss for the Lions, as a young Orlando City team was thrashed by a team that is likely an MLS Cup favorite. Consistency in defense remains a major concern, and it wouldn’t be a surprise to see Adrian Heath and co. address it before the end of the summer.
————————-

OUTLOOK: Jordan Morris continues to shine, especially in Tuesday’s friendly win over West Ham, but the Sounders remain a team in disarray. Still second to last in the West, the Sounders will need Clint Dempsey and Morris to lead the way before the team adds some help in the transfer window.
————————-

THIS WEEK: vs. Orlando City on Friday

OUTLOOK: Overall, a very good performance from the Dynamo, who took down one of the East’s contenders. Wade Barrett has done a solid job as head coach so far, and could certainly be a option long-term for a Dynamo team that looks to be on the up.
————————-

OUTLOOK: The Crew desperately need the transfer window. With just one win in their last nine, the Crew just aren’t a very good team as assembled, especially defensively. Expect some new faces soon behind forward Ola Kamara, who has proven to be a legitimate goalscorer.
————————-

OUTLOOK– Following a three-game winless run, the Fire took advantage of a beat up Earthquakes backline to secure a hard-fought win. The Fire remain way out of the playoff picture, but the win is a sign of progress from a team assembling a very new-look roster.
————————-