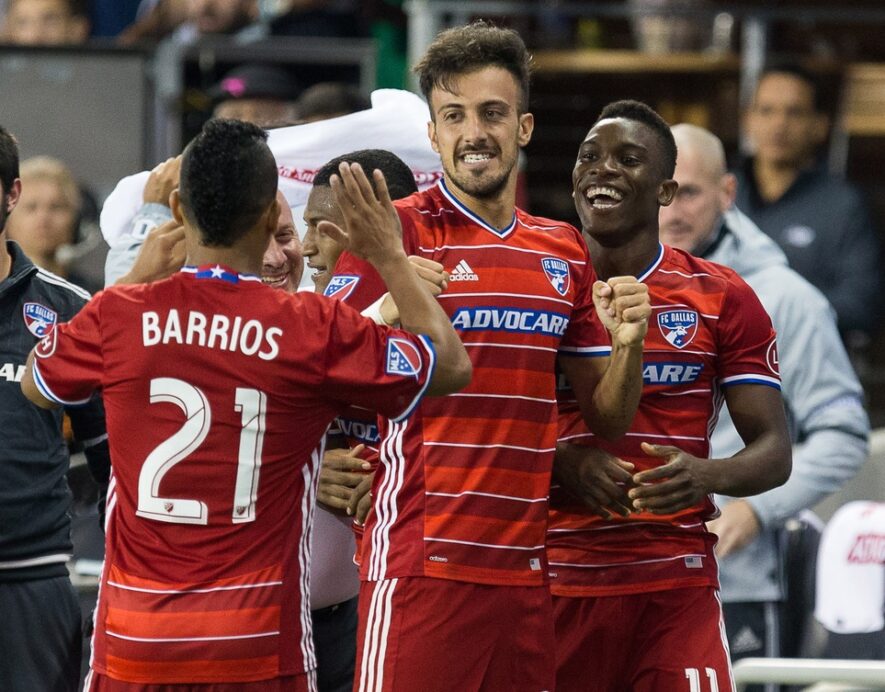 Several Western Conference teams have asserted themselves as MLS’ best, and this past weekend’s action only served as another reminder of several teams’ dominance.

FC Dallas continued to roll with yet another victory, while the LA Galaxy and Sporting Kansas City extended their recent upswings with wins of their own. The Colorado Rapids were forced to settle for a third straight draw, but the result was enough to extend their unbeaten run to 13 straight.

The East saw contenders rise and fall, with the Philadelphia Union serving as the most impressive due to a thumping of D.C. United. New York City FC saw their four-game win streak snapped, while the New England Revolution provided a statement win by knocking off Kei Kamara’s former team, the Columbus Crew.

THIS WEEK: at Seattle Sounders on Wednesday, vs. Chicago Fire on Saturday

OUTLOOK: It wasn’t as resounding as their prior thumping of Orlando City, but a Maxi Urruti golazo earned FC Dallas yet another victory. It was FC Dallas’ third straight triumph, as Oscar Pareja’s side is firing on all cylinders as the summer hits its busy period.

OUTLOOK: The Rapids remain unbeaten in 13 straight, as Axel Sjoberg’s stoppage time equalizer yielded the team’s third-straight draw. It was a gritty performance from the Rapids, who have looked better with Tim Howard in net, even if results haven’t necessarily shown it.

OUTLOOK: Robbie Keane continues to provide the goals, while Brian Rowe and AJ DeLaGarza combined to keep the Sounders off the scoresheet in Saturday’s win. Unbeaten in four, the Galaxy have also now won two straight, a streak that coincides with the return of the club’s stars from international duty.

THIS WEEK: at Vancouver Whitecaps on Wednesday, vs. New England Revolution on Saturday

OUTLOOK: A second consecutive draw for RSL saw the team snag a late point via a penalty kick. After controlling the majority of the ball, RSL should be disappointed,but face a quick turnaround a rigorous travel schedule for their upcoming double game week.

THIS WEEK: at Montreal Impact on Sunday

OUTLOOK: In what was likely the Union’s most impressive effort of the season, Roland Alberg and Ilsinho led the way in a complete domination of D.C. United. Defensively, the Union were completely unchallenged, while the club’s attack appears to be getting better following a two-game losing skid.

THIS WEEK: at Chicago Fire on Wednesday; at Colorado Rapids on Saturday

OUTLOOK– Sporting KC is finally putting things together on the attacking end, and it showed in the win over NYCFC. Unbeaten in five with three wins during that stretch, it seems the club is back on track after sputtering a bit from April through June.
———————–

THIS WEEK: at Portland Timbers on Wednesday; vs. New York City FC on Saturday

OUTLOOK: The Impact will be frustrated to drop points in a late draw with Real Salt Lake, even if the club remains unbeaten in five. Didier Drogba appears set to return on Saturday, providing a boost for a team that has done quite well without him over the past few weeks.

THIS WEEK: vs. Montreal Impact on Wednesday, vs. Seattle Sounders on Saturday

OUTLOOK: The Timbers’ draw with the Red Bulls was far from pretty, but it sure was effective. The reigning MLS Cup champions will take a point from a difficult venue heading into a crucial two-game stretch that culminates with a Cascadia clash with the Sounders.

THIS WEEK: vs. Orlando City on Wednesday; at Philadelphia Union on Sunday

OUTLOOK: A disappointing draw for the Red Bulls on the heels of a major trade that sent longtime start Lloyd Sam to D.C. United. Perhaps the biggest loss of the weekend, though, is Gideon Baah, who is set to miss major time just as Damien Perrinelle is set to return at centerback.
————————-

THIS WEEK: at Columbus Crew on Wednesday; at San Jose Earthquakes on Saturday

OUTLOOK: TFC snapped a mini-skid with a defeat of the Fire on Saturday in a game that saw the Canadian side grind out a result. Throughout 2016, TFC has never truly looked comfortable winning ugly, making Saturday’s win a positive step for a team still battling several key injuries.

THIS WEEK: at Real Salt Lake on Wednesday; vs. Orlando City on Saturday

OUTLOOK: A frustrating draw for a team that was just moments away from sealing all three points. A new-look Whitecaps did have their moments, though, and provided some positive looks following the sale of Octavio Rivero.

OUTLOOK: After dropping three straight, the Revs bounced back perfectly with a win over the reigning MLS Cup runners-up. Kei Kamara, in particular, will be thrilled with the effort, as the former Crew star provided the final goal to seal the result.
————————

OUTLOOK: There’s no shame in losing to FC Dallas, but there is reason to be concerned as the Quakes now sit winless in seven. It was also the team’s first loss at home this season, as a previously-unconquerable Avaya Stadium finally saw a loss to a Western Conference contender .
————————-

OUTLOOK: D.C. United made a solid deal in acquiring Lloyd Sam, but Saturday’s loss to the Union was a bad one. D.C. was never even close to being in the game, as the attack looked all but useless against a resolute Union backline.

THIS WEEK: at New York Red Bulls on Wednesday; at Vancouver Whitecaps on Saturday

THIS WEEK: vs. FC Dallas on Wednesday; at Portland Timbers on Saturday

OUTLOOK: A loss to the Galaxy sees the Sounders winless run extend to four, with the club also losing six of eight. It doesn’t get any easier from here, as the West’s best team and the reigning MLS Cup champions await.
————————-

OUTLOOK: With just one loss in six games, the Dynamo are making progress, even if that progress isn’t yielding as many wins as one would hope. A trip to the Galaxy is a tough assignment, but the Dynamo need to start finding wins if they are to pry their way back into the postseason race.
————————-

THIS WEEK: vs. Toronto FC on Wednesday, vs. D.C. United on Saturday

OUTLOOK: The loss to the Revs was a painful one for the Crew. Kei Kamara led the Revs to a statement win, one that drops the Crew even further down the table. Now on just 16 points through 17 games, the Crew have work to do, but have two home games this week to start making up ground.
————————-

THIS WEEK: vs. Sporting KC on Wednesday; at FC Dallas on Saturday

OUTLOOK– A loss to TFC comes just before what could be the toughest double gameweek imaginable. Set to face two of the league’s most in-form teams, the Fire have won just one of five, as their attack continues to sputter, especially on the road.
————————-