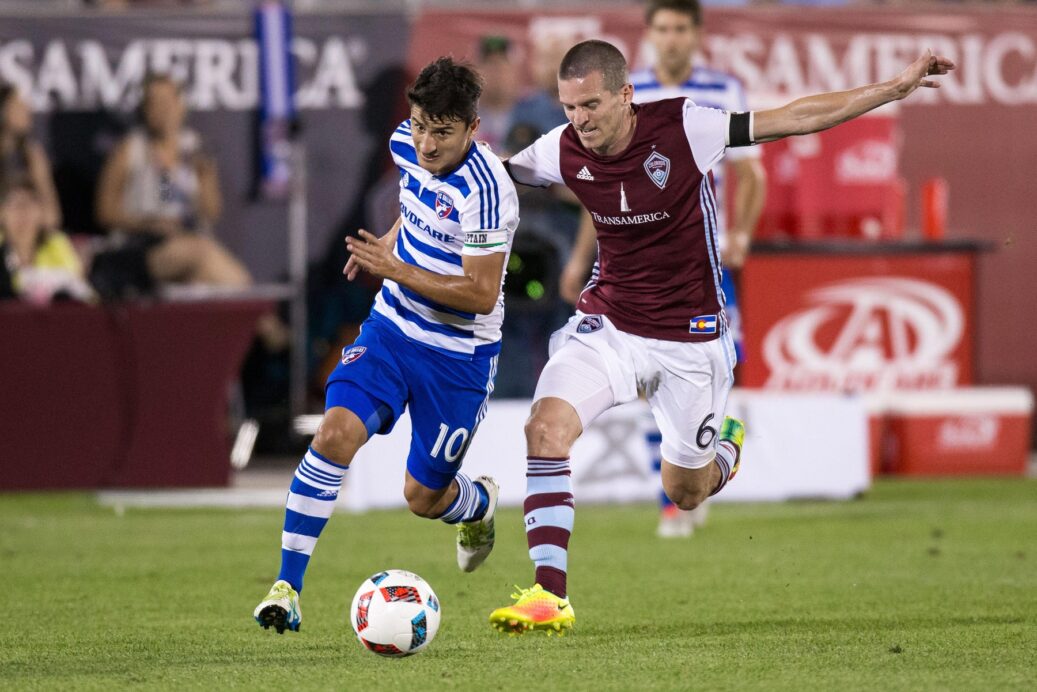 Ahead of the MLS All-Star Game, several contenders furthered their summer dominance, while several teams pushed back into the postseason picture with resounding victories.

In a clash of two of the league’s top teams, the Colorado Rapids and FC Dallas played to a draw, while the LA Galaxy furthered their case with a victory over the defending champion Portland Timbers. In the East, New York City FC and the Philadelphia Union floundered in lopsided losses to the New York Red Bulls and Montreal Impact, respectively.

Those two matches were not the only lopsided contests, though. Toronto FC cruised past D.C. United, 4-1, thanks to Sebastian Giovinco, while Sporting Kansas City thumped a Seattle Sounders team that failed to muster much of a resistance.

With that, here’s a look at this week’s SBI MLS Power Rankings:

OUTLOOK: The Rapids were just moments away from snatching what could have been another season-defining victory before Victor Ulloa unleashed a long-range goal more than worthy of an equalizer. Still, the Rapids are unbeaten in 15 games, and Saturday’s result further solidifies their spot among the league’s favorites.

OUTLOOK: Victor Ulloa uncorked a magnificent tying goal late in Saturday’s clash, snatching a draw from FC Dallas. It remains to be seen how the team fares following the reported sale of Fabian Castillo, though. Castillo is truly one of the league’s elite talents, and the club’s title push will be much more of an uphill climb without the livewire of a winger.

OUTLOOK: The Galaxy’s depth is unmatched in MLS, and it seemed like each and every piece, both big and small, played a part in Saturday’s win over the Timbers. Robbie Keane and Gyasi Zardes provided the goals, while Emmanuel Boateng proved a major contributor in what was certainly an impressive win over the reigning champions.

OUTLOOK: Another major statement from the Red Bulls, who stepped up to thrash their local rivals once again. Sacha Kljestan extended his league lead in assists, while Bradley Wright-Phillips shined in yet another big game, one that catapults the Red Bulls up the conference standings.
————————-

THIS WEEK: at Sporting KC on Sunday

OUTLOOK: The Timbers’ nine-game unbeaten run came to a halt on Saturday, as the reigning champs fell to a fellow contender in the LA Galaxy. A tough loss for the Timbers, but the bigger loss may Nat Borchers, who is now set to miss the rest of the season due to injury.

OUTLOOK– The Sounders never truly showed up on Sunday, but that doesn’t make Sporting KC’s performance any less spectacular. Dom Dwyer was at his best while the defense was never truly challenged in an easy victory.
———————–

OUTLOOK: After weeks of consistent performances, NYCFC finally put forth a dud at truly the worst possible time. Thumped by the Red Bulls yet again, it was easy to see the frustration mounting for the second-year side, which enters a clash with the Rapids without four key players due to suspension.
————————-

THIS WEEK: at D.C. United on Sunday

OUTLOOK: There were concerns surrounding Didier Drogba’s recent performances, but the Ivorian star fired back in a major way on Saturday. A hat-trick led the way in the destruction of a fellow contender, while Ignacio Piatti continued to lead the way for a team that looks set for a rise up the table.

THIS WEEK: vs. Columbus Crew on Sunday

OUTLOOK: Sebastian Giovinco was at his best on Saturday, scoring a hat-trick that included a pair of magnificent free kicks. Equally important was Jozy Altidore’s return to the field, as the U.S. Men’s National Team striker should give Giovinco some help in the final third.

OUTLOOK: In search of the club’s first win in several weeks, RSL just couldn’t quite get the job done against the Earthquakes on Friday. RSL had their chances, but failed to truly capitalize heading into what should be an interesting interconference clash with the Union.

OUTLOOK: The Union are in a bit of a rut, and the loss to the Impact on Saturday signified a major low point for a team still in contention. It’s a bit too soon to condemn the Union, but improvements need to be made if they hope to remain among the East’s top dogs.

THIS WEEK: at Orlando City on Sunday

OUTLOOK: Far from a convincing performance, but the Revs will take three points and jet away from Saturday’s win over the Fire. The forward pool remains a bit off, but the Revs are riding a hot streak that includes a U.S. Open Cup quarterfinal victory.
————————

THIS WEEK: at FC Dallas on Sunday

OUTLOOK: David Ousted and Kendall Waston carried the load on Saturday in a game that the Whitecaps probably deserved to lose. The Whitecaps are unbeaten in four, but three of those four have ended as draw, signaling a need for a bit of improvement for a team still figuring out the forward position.

THIS WEEK: at Houston Dynamo on Sunday

OUTLOOK: The Earthquakes are still in search of their first road win of the season, but Rio Tinto Stadium is a stadium that has proven difficult to snatch one from. All things considered, the point was a solid one, especially given the fact that Chris Wondolowski returned to the scoresheet following a barren period.
————————-

THIS WEEK: vs. Montreal Impact on Sunday

OUTLOOK: D.C. United was absolutely under siege on Saturday, as Sebastian Giovinco led wave after wave of Toronto FC attack. Backup goalkeeper Travis Worra filled in admirably in place of Bill Hamid, but D.C. earned a beating that sent them even further down the Eastern Conference ladder.

OUTLOOK: Yet another tie for Orlando City, the league’s draw kings to date. Overall, not a terrible effort, and with Jason Kreis about to join up with the team, it appears better days may be on the horizon for a team still hanging around the postseason picture.
————————-

THIS WEEK: at Toronto FC on Sunday

OUTLOOK: The Crew just aren’t earning enough wins to remain in the playoff hunt. Ola Kamara continued his hot streak on Saturday, but the Crew’s hopes of the postseason continue to fade each and every week.
————————-

OUTLOOK: It’s been a rough season for the Sounders, but Sunday’s performance was likely the worst yet. The perennial contenders legitimately didn’t show up in Sunday’s defeat, firing only one shot late in the game when the result was all but decided. A clash with the Galaxy looms, and if the Sounders can’t get up for that one, then changes will certainly be needed going forward.
————————-

THIS WEEK: vs. San Jose Earthquakes on Sunday

OUTLOOK: The Dynamo are playing a bit better post-Owen Coyle, but the results still aren’t coming. Erick ‘Cubo’ Torres looked a bit off on Saturday, and the forward will need more minutes going forward if he hopes to find any sort of rhythm with a team that has never truly seen him at his best.

OUTLOOK: The Fire had their chances on Saturday, but an easily-preventable goal proved their undoing in yet another loss. The road doesn’t get any easier with the Red Bulls coming to town, and the Fire will need to go on quite a run if they hope to make a postseason push.