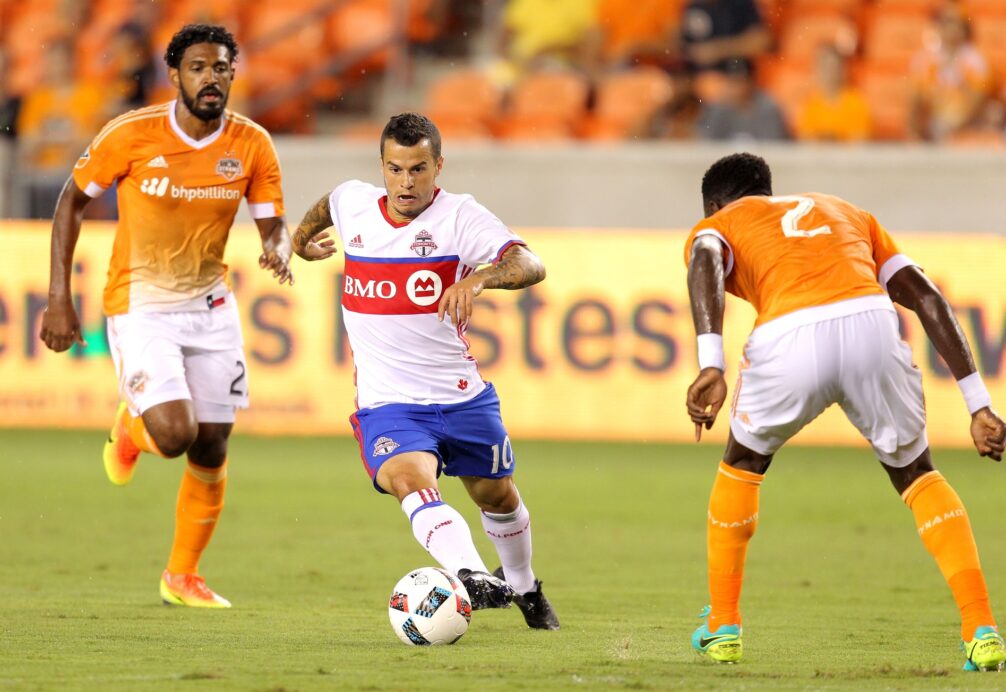 Following yet another Jozy Altidore goal, Toronto FC had a whole half to attack a 10-man Houston Dynamo side. Yet, the Eastern Conference contender failed to capitalize on a match that turned out to be a missed opportunity.

Altidore scored his third goal in four games on Sunday night, leading Toronto FC in a 1-1 draw with the Dynamo at BBVAA Compass Stadium. Originally scheduled for Saturday evening, Sunday’s clash was pushed back one day due to weather conditions. The draw signals the end of TFC’s four-game winning streak, but pushes the team’s unbeaten run to five, while the Dynamo earn their third draw from four matches.

The delay forced both sides to wait an extra day to take the field, but Cristian Maidana pushed his side to the ideal start with an eighth-minute finish. Darting down the right side, Andrew Wenger played a pass to Mauro Manotas, who flicked a first-time pass up and over the TFC defense. Maidana ran onto the pass and rocketed a first-time volley, leaving Alex Bono all but helpless as the Dynamo captured an early lead.

Altidore struck 16 minutes later, firing his third goal in four games since returning from injury. In the forward’s first start since mid-May, the U.S. Men’s National Team veteran’s finish was a stunning one.

The assist came from none other than Sebastian Giovinco, who’s helped was his 11th of the season. On a corner kick, the Italian star laced a pass on the ground and into the center of the box. Altidore rushed through the Dynamo defense and laced a first-time shot into the corner, giving TFC an equalizer that would eventually earn them a hard-fought road point.

From there, the Dynamo would be forced to hang on as Abdoulie Mansally was sent off for denying Giovinco an obvious goalscoring opportunity just moments before halftime. TFC would fail to cash in, earning just a point despite a whole half against the 10-man Dynamo. It wasn’t quite for a lack of chances, though, as Jalil Anibaba’s bicycle kick clearance off the line all but saved a point for the Dynamo.

With the draw, Toronto FC moves to second place in the Eastern Conference, one point back of NYCFC with a game in hand. The Dynamo, meanwhile, remain last in the Western Conference, six points behind the ninth-place Seattle Sounders.

TFC looks to make it six straight unbeaten on Saturday with a visit to the Philadelphia Union, while the Dynamo take on the San Jose Earthquakes one day earlier.

Throughout Sunday’s match, Mauro Manotas was an absolute handful. The forward’s early assist got the Dynamo off to a spectacular start, and his seven shots on the night kept the TFC defense honest all through the match.

Jalil Anibaba’s miraculous clearance saved the game, while certainly sealing a spot among contenders for play of the year.

For Toronto FC, Sunday’s result will be seen as a disappointing one. Given a whole half to attack, TFC failed to break down the Dynamo defense, missing a chance to take sole obsession of the East’s top spot.