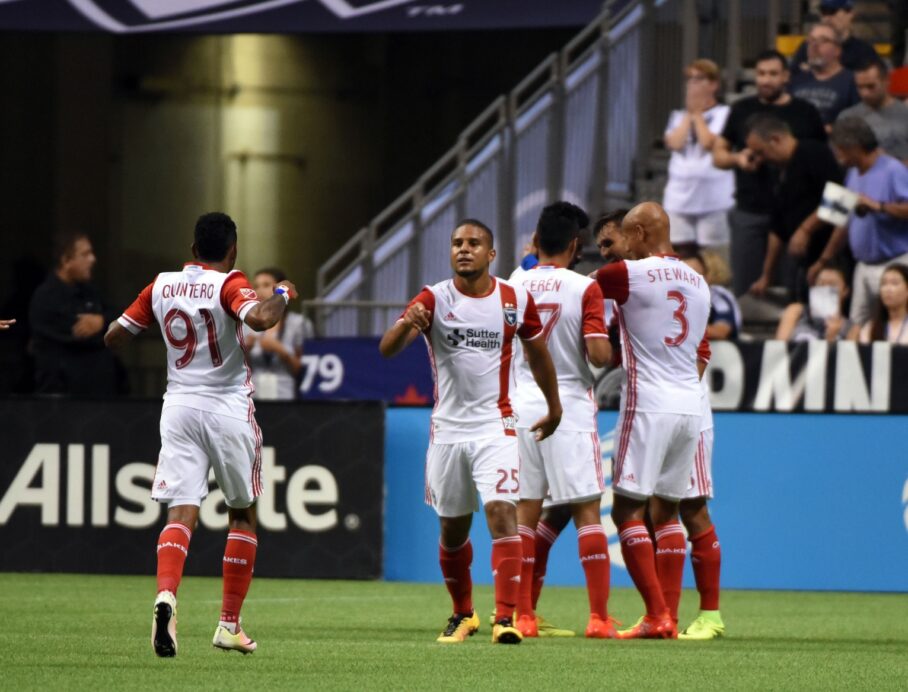 The San Jose Earthquakes failed to win each of their first 12 road matches, but Quincy Amarikwa and Simon Dawkins ensured Friday night would be a successful one for a team still in the thick of a playoff race.

Amarikwa and Dawkins each contributed goals on the night, leading the Quakes to a 2-1 victory over the Vancouver Whitecaps at BC Place. The win was the Earthquakes’ first win away from home this season, one that pushes the team into the playoff picture at least for the time being. On the other end, the Whitecaps are now winless in five straight, a streak that now includes a three-game losing skid.

Just 15 minutes in, Amarikwa pushed the visitors into the lead with his third goal of the season. Just moments after seeing Fatai Alashe clang the crossbar, the Earthquakes forward rose high on a Anibal Godoy corner kick. David Ousted was able to hold on to the shot, but the Vancouver Whitecaps goalkeeper fell backwards over the line as Amarikwa was awarded the goal.

Some top class dribbling from Dawkins pushed the lead to two at the hour mark. On the receiving end of a pass from Alberto Quintero, Dawkins took off while eluding his defender. A rifle of a shot left Ousted helpless as the Whitecaps fell behind, 2-1. A stoppage time goal from  Nicolas Mezquida served as little more than a consolation, as the Whitecaps slumped to yet another defeat.

Following the win, the Earthquakes will return to action on Friday for a home clash with the Houston Dynamo, while the Whitecaps hit the road for a match with Sporting Kansas City one day later.

Simon Dawkins probably hasn’t been at his best this year, but the English playmaker was very good on Friday night. Dawkins was a handful throughout, and his goal proved vital in a very important Earthquakes win.

Hindsight is 20/20, and Dawkins’ finish looks very important given the Whitecaps’ late strike. The eventual game-winner kept the Earthquakes’ playoff hopes alive while striking a major blow to the Whitecaps’ push towards the postseason.

The goal was an awkward one, but David Ousted will be left fuming from the Quakes’ first finish. Fully in control of the ball, Ousted just could not keep his body out, giving the Earthquakes a lead they’d never relinquish.