Galaxy and Whitecaps battle to spirited but scoreless draw 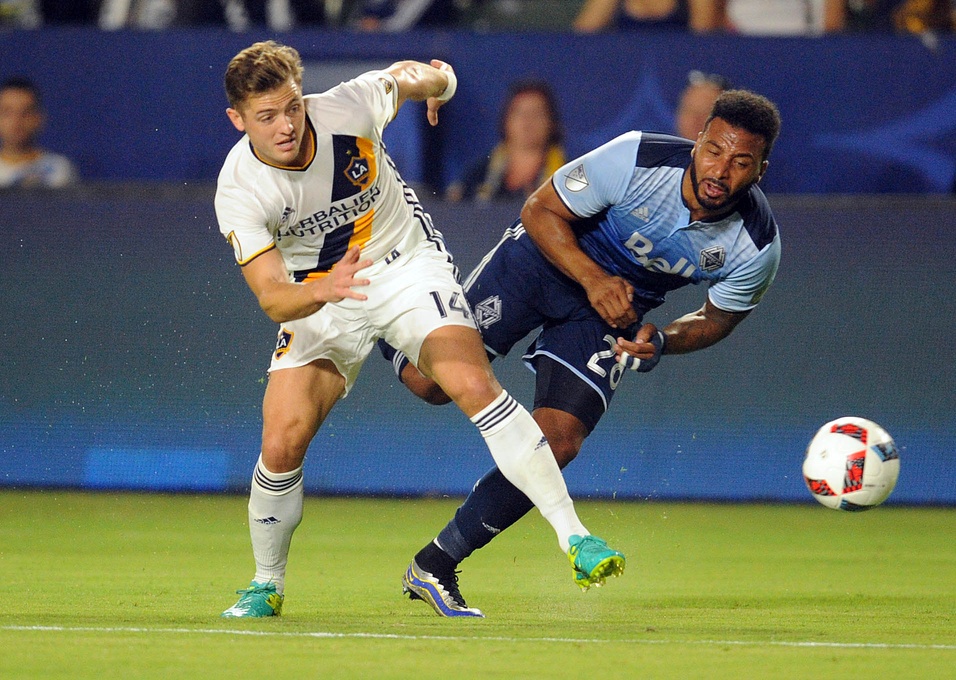 Carson, Calif. – The Vancouver Whitecaps left their finishing boots – and their good luck charms – behind in Canada, and left Southern California with a 0-0 draw against Western Conference rival LA Galaxy.

The Whitecaps may have struggled to find the back of the net, but that was still a superior performance to the Galaxy, who struggled to generate shots in the first hour, and struggled all night to combine effectively in the final third.

The Galaxy’s most effective attacking threat on the evening may have been Robbie Rogers, who consistently got around the edge to whip in crosses that went unfinished. The fact that Rogers is a defender, and was playing in his first match in six weeks after undergoing ankle surgery, only highlights the Galaxy’s continued struggles in the attack.

The ‘Caps best chance, by far, came early in the match.  Giles Barnes, acquired from Houston at the trade deadline, pulled the Galaxy defense out of shape with a crisp run up the right channel.  Galaxy center back Jelle Van Damme was forced to leave the center of the pitch to cover, and no Galaxy defender could get back on time to mark the wide open Erik Hurtado.  Hurtado headed down Barnes’ cross in front of a yawning empty net, but the ball somehow came up and hit the crossbar and deflected out.

Undaunted, Barnes, Hurtado, and Whitecaps captain Pedro Morales kept up pressure on the Galaxy defense throughout the match with long sprinting runs.  After the initial breakdown, however, the LA defense stayed more organized, and managed to keep the ‘Caps off the scoreboard on the evening.

The hosts managed to amp up their attack in the final twenty minutes, culminating in two decent chances by Alan Gordon.  Gordon, who rarely plays a full ninety minute match anymore, managed to put a header just over the crossbar, but was called offside, and ripped off a low shot that went just wide of frame in the closing minutes of the match.

The Galaxy saw three potential critical injuries on the night, two in the first half.  Steven Gerrard left in the 30th minute, and Jelle Van Damme in the 44th, both with lower leg issues.  Gyasi Zardes did not start, but was forced into duty when Gerrard went out.  Zardes  contributed little in the hour he was on the pitch.  Worse, he too left before the match was done after getting tangled up with Vancouver center back Kendall Waston.

For the Whitecaps, it was a successful road trip, as the draw ended a four game losing streak and netted them their first point in a month.  The Galaxy, on the other hand, after seeing their league-leading eight game unbeaten streak end in Yankee Stadium last weekend, now find themselves on the wrong end of a six game streak without a win.

Both sides’ next matches will be on their home turf.  The Galaxy stay in Los Angeles to host the Columbus Crew on Saturday, September 3rd.  The Whitecaps will return to Vancouver to host the New York Red Bulls on the same day.

Though he left his finishing boots in Canada, no one was more dangerous on the pitch for ninety minutes than Erik Hurtado.  His relentless sprints on the counter generated half as many shots on the night (5) than the entire Galaxy team (10).

Hurtado’s wide open header inside the goal mouth in the 8th minute defied the laws of physics when it bounced down, then up off the crossbar, then spun out away from goal.  Even Galaxy goalkeeper Brian Rowe thought Hurtado had scored.  The crossbar – and the Soccer Gods – rescued the Galaxy from a surrendering a second loss in three games.

The entire Galaxy attack.  It’s a known fact that any team coming to the Stub Hub Center will likely bunker in, play nine or ten men behind the ball, and look to score on the counter.  The Galaxy have had twenty six games to figure out how to break such teams down, but seem to be getting further from a solution the longer Robbie Keane is not in the lineup.