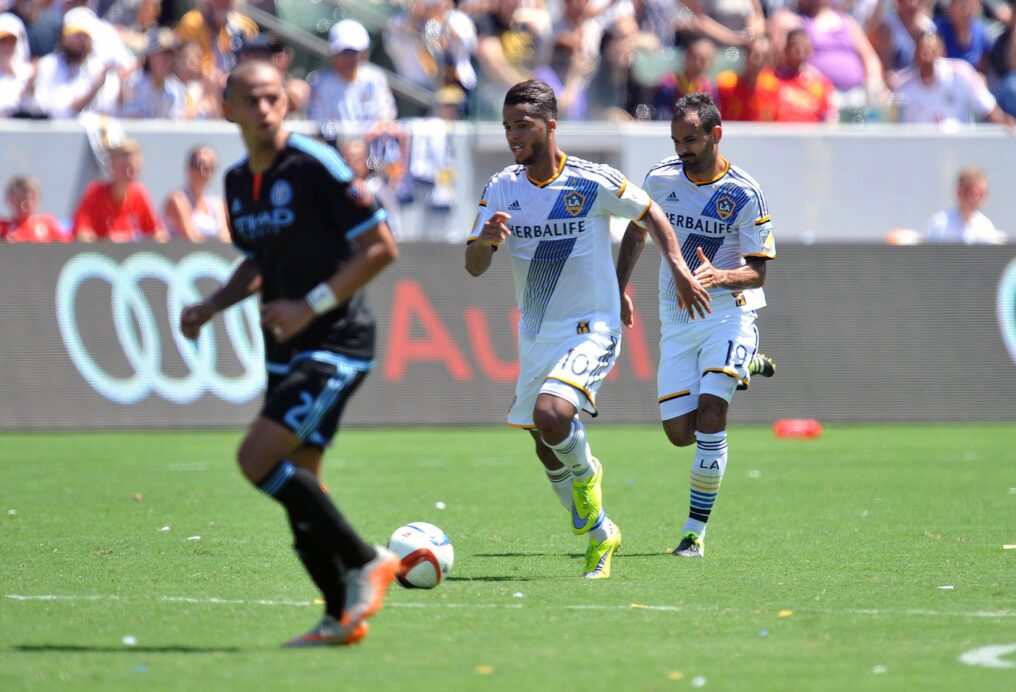 This weekend’s action is headlined by a Cascadia Cup clash between the Portland Timbers and Seattle Sounders. The Sounders have been heating up in recent weeks and could move to within two points of Portland in the Western Conference.

Over in the Eastern Conference, D.C. United and the New York Red Bulls will rekindle their rivalry in the Atlantic Cup.

Elsewhere, New York City FC and the LA Galaxy will square off in Saturday’s early kickoff, and Toronto FC battles the Philadelphia Union in a key clash in the East.

Here is a closer look at this weekend’s MLS action.

The San Jose Earthquakes are one of many teams who are in the playoff hunt in the West. A victory over the lowly Houston Dynamo could move the Quakes over the red line.

San Jose snapped a three-game winless skid after defeating the Vancouver Whitecaps to earn their first away victory of the season. Houston, meanwhile, has not won since July 2. Both sides are dealing with a few injuries, although several players are listed as questionable or doubtful for the Dynamo, including goalkeeper Tyler Deric and defender DaMarcus Beasley.

NYCFC is coming off back-to-back draws versus the struggling Columbus Crew and the San Jose Earthquakes. The Galaxy are winless in three straight MLS games, but they have picked up points in each of those matches. LA is entering this game without goalkeeper Brian Rowe due to a concussion. Meanwhile, the team is hopeful that star striker Robbie Keane will be available on Saturday.

Two teams jockeying for playoff seeding in the East will meet at Talen Energy Stadium on Saturday.

Unbeaten in its last five matches, Toronto FC’s form is the polar opposite of the Philadelphia Union’s, who won last week for the first time in the league since July 2. Both sides have a couple of key injuries, but the Union are expecting forward C.J. Sapong to be ready for the game. The likes of Justin Morrow and Benoit Cheyrou will miss the game, but TFC will be boosted by the potential return of Will Johnson and the addition of Armando Cooper on loan from Arabe Unido.

The Montreal Impact will try to get back into the conversation for the No. 1 spot in the East against the hapless Chicago Fire.

The Impact started brightly last week at the New York Red Bulls, but everything unraveled en route to a 3-1 loss. Now Montreal is without the suspended Ambroise Oyongo to go with the injured Harry Shipp and Patrice Bernier. Apart from Joao Meira, the Fire are fully fit. They will need to be on high alert as Didier Drogba has scored five goals in three games versus Chicago.

The Columbus Crew and New England Revolution are sliding further away from the postseason and are in desperate need for a victory.

The Crew have not won since May 28 and own a league-low three victories on the year. The Revolution haven’t been much better, which their inconsistent form dictates. The Revs have conceded 11 goals in their past three games, all losses. On the bright side for both teams, neither side is dealing with a slew of injuries entering the match.

The Colorado Rapids’ home unbeaten streak will be put to the test against a new-look Orlando City.

The Rapids are three points adrift of FC Dallas for first place in the East, while Orlando is level with D.C. United for the sixth and final playoff spot in the East. It will be a tricky tie for the Lions, as the Rapids have allowed just 20 goals this season, good enough for the best defensive record in MLS. However, the absences of Jermaine Jones, Dillon Serna and Dillon Powers could tilt the scales towards the visitors.

The Vancouver Whitecaps are struggling on both sides of the pitch, and in the win column, but they have a great opportunity against a tired Sporting Kansas City side.

Sporting traveled to Trinidad and Tobago midweek for its CONCACAF Champions League match versus Central FC. Head coach Peter Vermes rotated his lineup, but nonetheless, some players may feel the effects this weekend. Five points separate these teams, the Whitecaps have a game in hand, and SKC has a plethora of injuries. Matt Besler, Tim Melia and Chance Myers have all been ruled out.

The league leaders head to Utah as Real Salt Lake will play host to FC Dallas on Saturday night.

Both teams have been relatively consistent over the past few weeks, which makes this match even more intriguing. RSL’s Aaron Maund and Dallas’ Zach Loyd are the only crucial injuries heading into the game. The Claret and Cobalt are one of four unbeaten sides at home, so Dallas faces a difficult task at Rio Tinto Stadium.

D.C. is coming off a massive victory over the Portland Timbers last week, but the Red Bulls haven’t lost in their last seven matches. They have also bossed this rivalry in recent seasons, losing just once in the last six meetings against D.C. United. The Red Bulls have been weakened by injuries to Connor Lade, Dax McCarty, Damien Perrinelle and Gideon Baah, so the Black and Red have a golden chance this weekend.

The weekend finishes strong with the red-hot Seattle Sounders hosting their fierce rivals, the Portland Timbers on Sunday.

Three weeks ago, the Seattle Sounders were supposedly out of playoff contention. One Nicolas Lodeiro signing later, the Sounders are back in it. The Sounders is unbeaten since the Uruguayan’s debut and the attack is thriving once again. Young American striker Jordan Morris has been a major beneficiary, recording one goal and two assists. Without defender Nat Borchers, the Timbers will have their hands full.