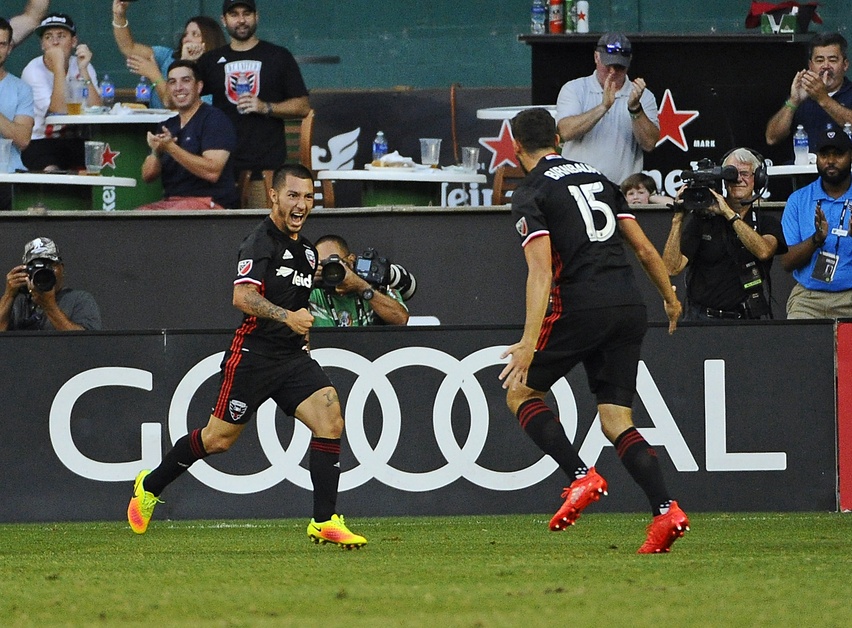 Patrick Mullins has proven a legitimate threat since joining D.C. United midseason, but the third-year forward provided his best performance yet on Saturday night.

Mullins fired a hat-trick in Saturday night’s goalfest, leading D.C. to a 6-2 victory over the Chicago Fire at RFK Stadium. The win keeps D.C. United alive in the playoff chase, while the Fire remain bottom of the Eastern Conference due to the defeat.

After a relatively tepid 25 minutes, both sides exploded for what turned out to be a five-goal first half.

The goalfest began with Luciano Acosta, who fired D.C. United into the lead with a 25th minute finish. Michael de Leeuw leveled the scoreline just six minutes later, but D.C. earned what appeared to be a commanding lead through a pair of back-to-back Mullins finishes.

Mullins’ goalscoring push began in the 40th minute on an assist from Patrick Nyarko, while Acosta provided the pass leading to the former NYCFC forward’s second goal, which came deep into first half stoppage time. However, it wasn’t deep enough to prevent the Fire from pulling one back, as Razvan Cocis pushed the scoreline to 3-2 just moments before halftime.

For Mullins, it mattered little as the D.C. United forward appeared to complete his hat-trick just six minutes into the second half, although the goal was later awarded to Nyarko. Karma did go Mullins’ way, though, as the forward officially fired his third goal in the 74th minute to all but wrap up the result. Nick DeLeon added a final finish for D.C. United in the waning moments to seal what turned out to be a lopsided victory.

D.C. United’s goal bonanza was aided by the dismissal of Khaly Thiam, who was sent off with a red card in the 34th minute for throwing the ball at Nyarko.

Following the win, D.C. United looks ahead to Thursday’s clash with NYCFC, while the Fire host the Philadelphia Union two days later.

There’s little doubt that Patrick Mullins was the star of the show on Saturday night, firing a hat-trick to lead his side in a lopsided win.

With the score set at 3-2 as the teams emerged from halftime, Patrick Nyarko’s finish early in the second half effectively put the game out of reach.