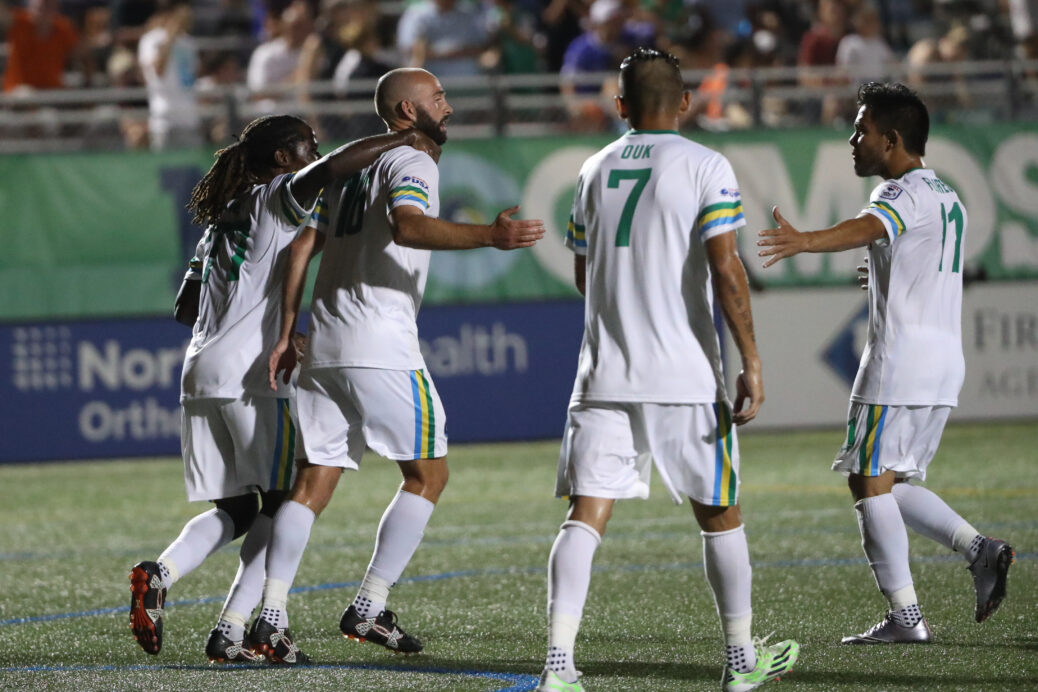 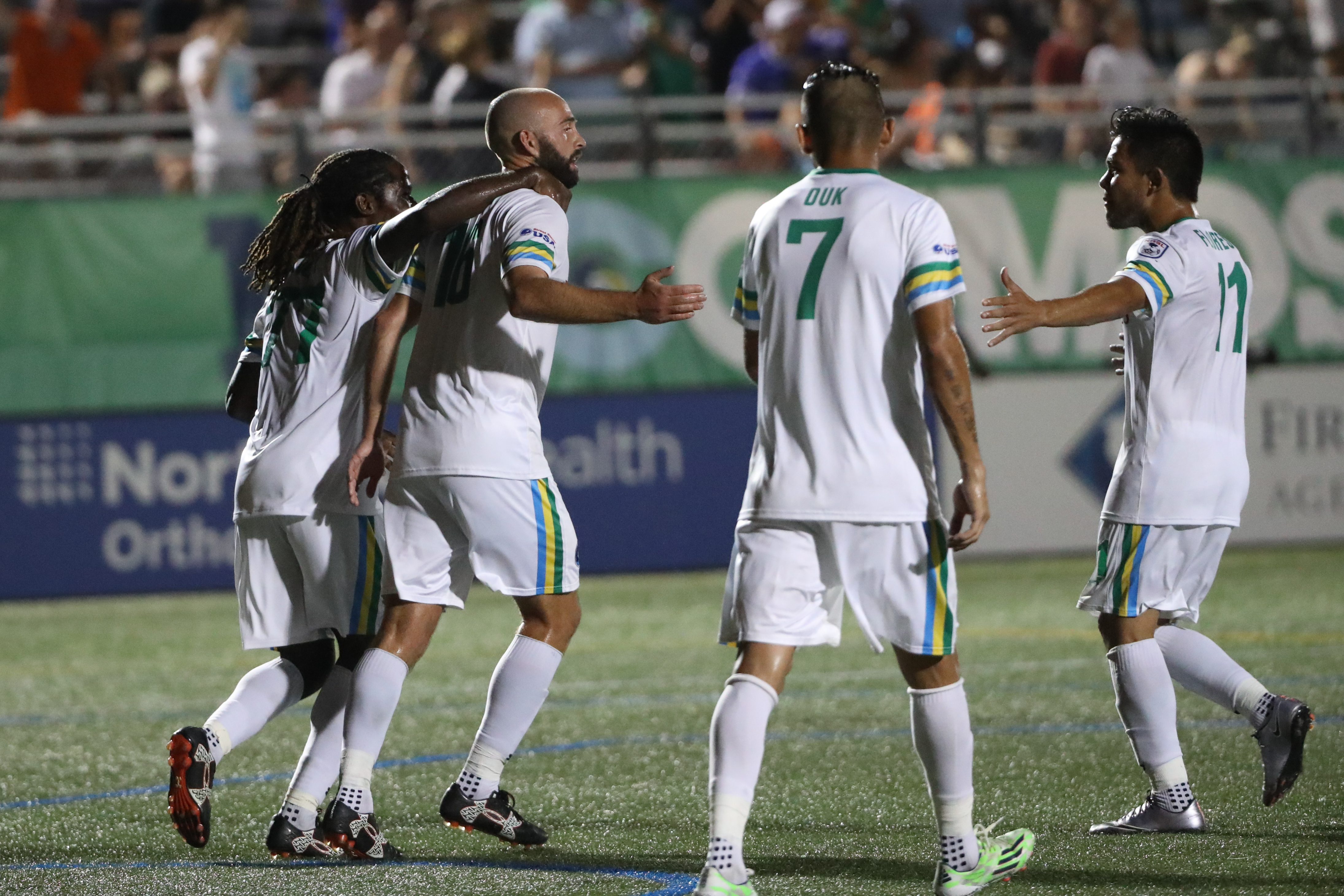 The top three all won, the next three all lost, and the Fall Season standings in the NASL didn’t change much over a fairly high-scoring weekend.

After drawing at home last week against Rayo OKC, the New York Cosmos returned to James M. Shuart Stadium and winning form at home by claiming a 3-2 victory over the Tampa Bay Rowdies. The win allows the Cosmos to keep pace just behind Indy Eleven, who took a 2-1 victory at home against the aforementioned Rayo OKC.

Elsewhere, the Ft. Lauderdale Strikers defeated their in-state rivals Miami FC, 2-0, at FIU Stadium, bringing themselves even on points with Puerto Rico FC in the cellar of the Fall Season table, as the expansion side drew 2-2 with the Carolina Railhawks.

It hasn’t been an easy Fall Season for Jacksonville to this point, but the Armada found their second victory of the season north of the border.

Ottawa Fury FC had been strong at home to this point, as they sought their third straight home victory entering this match. Luckily for the Armada, Alhassane Keita had other ideas as he recorded a brace off a pair of Jemal Johnson assists to lead his team to victory. The lone Fury FC goal came in the form of the match opener from Carl Haworth in the 26th minute. The lead would be short lived as Keita snatched his first just two minutes later before finding the winner late in the 87th minute.

The win sees Jacksonville move up to 10th place and snaps a 6 match winless streak dating back to July 9th.

Last week, the Cosmos failed to win at home for the first time in 2016 in a 1-1 draw with Rayo OKC. They had no such issues this week, dispatching the Tampa Bay Rowdies, 3-2, in an impressive comeback showing that included a sending off on each side.

The Rowdies got off to a strong start, leading by 2 after only 14 minutes thanks to goals from Joe Cole and PC. The end result was left wanting, however, as the Cosmos responded in spades. Two penalty goals from Adam Moffat brought the match to even by the 64th minute. The dagger in the last moments came from David Diosa off an assist from Andres Flores in the 90+3 minute.

The Cosmos remain two points behind the leaders, Indy Eleven.

Carolina looked set to fall to Puerto Rico FC in their first meeting ever, but a last minute goal from the RailHawks salvaged a point from their match.

Carolina opened the scoring in the 40th minute with a goal from Omar Bravo, who fired home an assist from Tiyi Shipalane. Puerto Rico FC answered back early in the second half via goals from Paulo Mendes in the 52nd minute and Hector Ramos in the 67th minute. The RailHawks’ continued pressure would pay off, however, as Matthew Fondy would find the back of the net in the 89th minute to level things at two each.

The result sees the RailHawks move a point ahead of the Rowdies into 8th place.

Indy Eleven maintained their position atop both the Fall and Combined tables in a 2-1 victory that featured yet another goal in the last minutes this weekend.

Rayo OKC jumped out to an early advantage as Futty Danso scored in the 12th minute to hand his team the lead. Indy Eleven would snatch one back just before half time from Dylan Mares and the teams would enter the break on even footing. The deciding goal was to come late in the 84th minute as Colin Falvey would supplement some solid defense with some offense of his own to break the tie.

Indy remains even on points with FC Edmonton, who have a match in hand, but have the advantage in goal differential.

Two teams from southern Florida were in action together on Saturday night as the Ft. Lauderdale Strikers headed over to Miami.

Miami FC utterly dominated in possession, but lacked an ability to do anything with the ball. They managed to get off 11 shots, but none were on target and as a result none ended up in the back of the net as they went scoreless on the night. The situation was reverse on Ft. Lauderdale’s side, as they surrendered possession in favor of an effective attack. The breakthrough moments didn’t come until late in the match however, as both goals came in the 84th and 86th minutes. Paulo Junior scored the first and Amauri provided the second off the bench.

It was Ft. Lauderdale’s second victory of the fall season and brought them even on points with Puerto Rico FC at the bottom of the table. Miami FC remained in fifth courtesy of losses from Rayo OKC and Minnesota United FC as well.

Even on points with Indy Eleven, a top half of the table match vs. Minnesota United was crucial for FC Edmonton to stay in the race for first.

Though out-possessed and out-shot, the Eddies did enough to keep the Loons out of goal as Matt Vanoekel and the defense earned a clean sheet. The offense did just enough to supplement them, with Tomi Ameobi being assisted by Daryl Fordyce and scoring moments after halftime in the 46th minute. The victory extends Edmonton’s winning streak to four matches and three consecutive clean sheets.

Though trailing on goal differential, Edmonton maintains a game in hand over Indy moving forward.