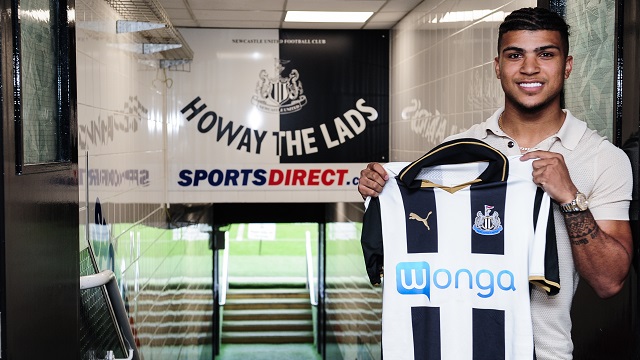 DeAndre Yedlin’s summer transfer saga has finally come to an end with a big-money move away from Tottenham.

Yedlin has officially joined Newcastle United via a permanent move away from Tottenham. According to Goal USA, the Championship club reportedly paid a $6.6 million transfer fee to acquire the U.S. Men’s National Team fullback, who has signed a new five-year contract with the club. According to Goal, Newcastle beat Aston Villa and Sunderland to acquire Yedlin’s services.

“Newcastle is such a big and historic club, and I’m excited to have the honor of playing for them. Hopefully I can do great things here,” Yedlin said.”I’m excited to learn under (Newcastle manager) Rafa Benitez as well. He has an amazing résumé and I know he will help improve me a lot. I can’t wait to get started.”

The signing of Yedlin gets Newcastle a starting-caliber right back, as the club looks to replace Daryl Janmaat, who joined Watford on Wednesday.

“We have known for a little while of Watford’s interest in Daryl Janmaat, so it was important for us to bring in a replacement immediately,” said Benitez.”In DeAndre we have a player who knows English football well. He has good experience, an attacking mentality, ability and great pace. I think he can do really well for us and will give us good competition on the right.”

Yedlin’s move away from Tottenham comes just over two years after the fullback joined the Premier League club from the Seattle Sounders. The reported $6.6 million transfer fee nets Tottenham a hefty profit on the $4 million paid to the Sounders in 2014. As a result of the deal, the Sounders will receive $600,000 as part of a sell-on clause that was included in the original move away from MLS.

Yedlin could make his Newcastle debut as soon as Saturday when the Magpies host Brighton at St. James Park.

What do you think of the move? How will Yedlin fare with Newcastle?