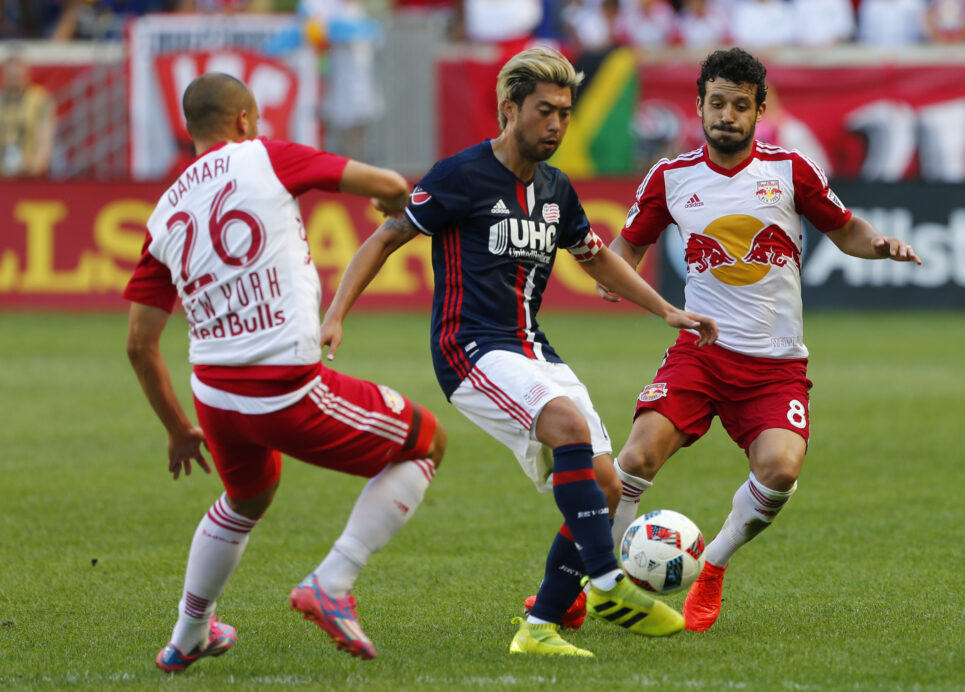 HARRISON, N.J. — Kei Kamara, Lee Nguyen, Juan Agudelo, Diego Fagundez. The New England Revolution have one of the more talented attacking groups in MLS, but somehow are continuing to have trouble finding the back of the net.

It has proven costly throughout the course of the season, and did so again on Sunday.

The Revolution were once again on the losing end of a match on Sunday afternoon after they suffered a narrow 1-0 road loss to the New York Red Bulls at Red Bull Arena. A 55th-minute goal from Bradley Wright-Phillips may have been the difference between the two Eastern Conference sides, but the Revolution never really appeared to come close to picking up three points.

As has been the case for large portions of this season, Jay Heaps’ club struggled in the attacking third vs. the Red Bulls. The Revolution never really threatened Luis Robles in goal, and Kamara, Nguyen, and co. all had fairly quiet performances en route to seeing their current winless streak extend to four games.

Making things even worse? They have failed to find the back of the net in each and every one of those matches, leaving them with more than six hours of scoreless soccer.

“I think it’s frustrating for everybody because I think that we pride ourselves on being a team that can finish,” said Revolution head coach Jay Heaps. “The last four games have just not been good enough in the final third.”

The same could be said for the total body of work in the final third this season. Despite having a dynamic stable of attackers, the Revolution are tied for third-fewest goals in MLS right now with 29. Only the defensively-stout Colorado Rapids and struggling San Jose Earthquakes have less.

The lack of goals is a big part of why the Revolution sit in eighth place in the Eastern Conference, five points shy of the final playoff spot currently held by D.C. United. Nguyen currently leads the team with five tallies, and Kamara is in second with four. Kelyn Rowe, Agudelo, and Fagundez follow with three apiece while Teal Bunbury has just two this year.

Those measly returns in front of the net are why the Revolution have experienced tough moments like the one they had on Sunday, when all it took was a rebounded finish from Wright-Phillips to give the Red Bulls the win.

“I felt like we started the second half very well and we created a number of chances and unfortunately we gave up another goal,” said Revolution goalkeeper Brad Knighton. “But you can’t fault the effort. The effort was absolutely fantastic, it was spot on, and unfortunately we came up short.

The 2016 struggles could be attributed to any number of reasons, be it the Revolution’s failure to alter a system that changed when ace midfielder Jermaine Jones was traded in March. Or opposing clubs figuring the Revolution out. Or things growing stale after years of sticking with the same core and bringing in little help from the outside.

Regardless of the reason, it’s just not clicking right now in New England.

“Just focus, just continue to play, continue to really combine and have faith with each other going forward. Really that’s (how we fix the scoring issue),” said Kamara, who was traded to the Revolution in May. “You know it’s the responsibility of everyone, not just one guy scoring a goal. It’s a team that many guys can score goals.”

The Revolution are unlikely to get any more help in the way of additions before MLS’s roster freeze date on Sept. 15, but they are still maintaining the belief that they have what it takes in-house to right the ship. Yes, the season is headed for its stretch run, but the Revolution think they can do a better job of testing and punishing teams.

If they can accomplish that, then a goal like the one Wright-Phillips scored on Sunday might not prove to be the difference.

“I’m confident,” said Heaps. “I see what we can do, and we just have to make sure it translates to the field. We’ve had a run of some serious not very good games, and we need to turn it around because the time’s running out.

“The one thing about this league is that you feel like, if you get one, you can get two, and you can get three in terms of games in a row and just keep plugging away. Right now that’s what we have to do.”