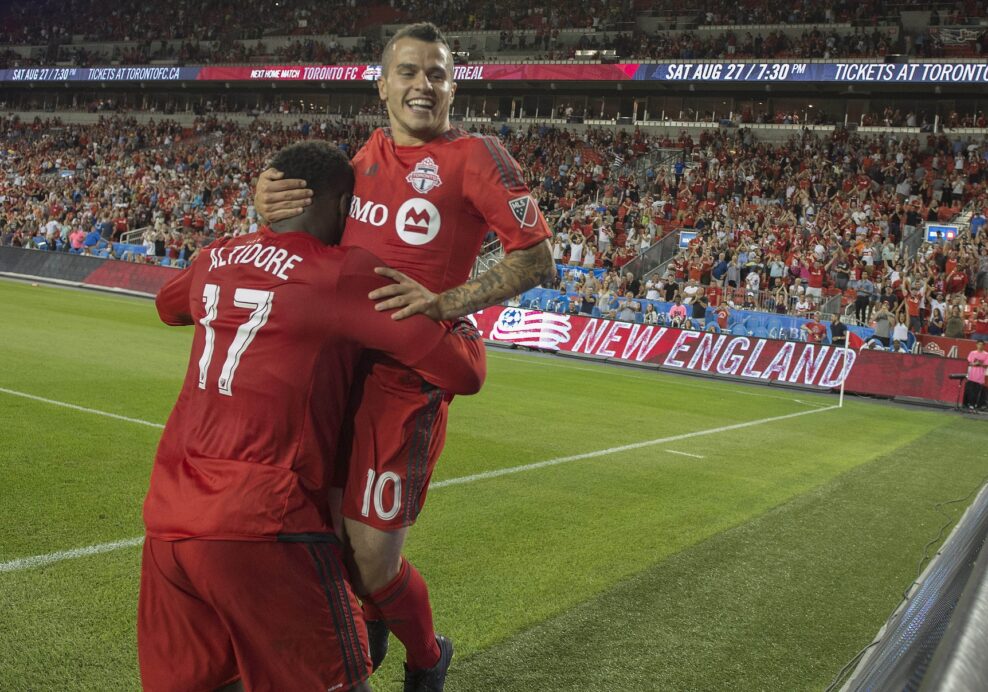 The league’s top-ranked and bottom-ranked teams were off this past week, but those in between did plenty of moving over the weekend.

Toronto FC emerged as big winners throughout Week 22, toppling Real Salt Lake before cruising past the New England Revolution behind Sebastian Giovinco. The Portland Timbers and Colorado Rapids also benefited from lopsided wins, while the Seattle Sounders made a major statement by thumping Orlando City.

Some teams weren’t so lucky. The Vancouver Whitecaps’ struggles continued with another loss, while bottom-dwellers like the Chicago Fire and Houston Dynamo continued to slide further down the table and rankings.

THIS WEEK: vs. Sporting Kansas City on Saturday

OUTLOOK: A week off from MLS play was headlined by a narrow CONCACAF Champions League win over Real Esteli. Still, the week feels a bit like a loss for a team that will officially be without Fabian Castillo the rest of the way. FC Dallas remains a favorite, but it will be interesting to see how the team bounces back from the sale of their biggest star

THIS WEEK: at LA Galaxy on Saturday

OUTLOOK: It was a perfect bounce-back performance from the Rapids, who took down a playoff contender one week after seeing their 15-match unbeaten run ended by a 5-1 beating. Marlon Hairston shined on Saturday night, helping lead a team that will be much better when Michael Azira and Jermaine Jones return to the fold.

OUTLOOK: The Galaxy’s seven-match unbeaten run looked set to end before Ashley Cole and Mike Magee fired a second half comeback. Bad refereeing aside, the Galaxy did well to fight back against a tough Red Bulls team to steal a point that they had no business getting.

OUTLOOK: The perfect week from Toronto FC, who showed they can win ugly just as well as they can win beautiful. Sebastian Giovinco continues to defy each and every expectation, while the returns of Jozy Altidore and Michael Bradley bode well for a team that is playing its best soccer heading down the home stretch.

OUTLOOK: A point from the StubHub Center is usually a respectable haul, but the Red Bulls will be very frustrated with how things went on Sunday. Several injuries marred the draw, while controversial refereeing decisions denied the Red Bulls a late win. Still, all things considered, the Red Bulls are just fine thanks to their current six-game unbeaten run.
————————-

OUTLOOK: Just days after smashing the Rapids by four goals, NYCFC had a bit of a stinker against the Earthquakes. Josh Saunders stepped up in a major way for the Eastern Conference leaders, who lost a bit of wiggle room thanks to what was a somewhat disappointing performance.

OUTLOOK: Diego Valeri led a second half surge, one that saw the 10-man Timbers cruise past a 10-man Sporting KC. When the team needed to step up, its stars turned up in a major way, from Valeri to Darlington Nagbe to Fanendo Adi. Performances like Sunday’s bode well for the Timbers, especially given how tight the race is out West.

THIS WEEK: at New York Red Bulls on Saturday

OUTLOOK: Far from a vintage performance, or a memorable one, but the Impact did what good teams do: win. Without Didier Drogba, Matteo Mancosu and Evan Bush did the heavy lifting on either end of the field, sealing a solid win for a team just four points out of first place with two games in hand.

OUTLOOK: An up-and-down week for Real Salt Lake, who sputtered against a hot Toronto FC team before cruising past the Fire. Special kudos to Nick Rimando for becoming MLS’ winningest goalkeeper and, like the days of old, it was the veteran goalkeeper and Javier Morales that shined brightest in Saturday’s win.

THIS WEEK: at FC Dallas on Saturday

OUTLOOK–  One week after toppling the defending MLS Cup champions, Sporting KC squandered a chance to do the same as the Timbers were reduced to 10 men. A red card of their own doomed Sporting KC on the day, and a second half collapse served as a major blow to a team still in the thick of a postseason race.
———————–

OUTLOOK: The tie was pretty frustrating, but the Union’s biggest achievements from this past week came off the field. The signing of Alejandro Bedoya should be a major one for a team on the precipice of a playoff push, while Charlie Davies provides valued depth at the forward position. Overall, a big week for the Union, even if the result didn’t show it.

THIS WEEK: at Vancouver Whitecaps on Friday

OUTLOOK: The Quakes have put together a four-game unbeaten run, but three of those four matches have produced just one point. On Friday, it wasn’t due to lack of chances, as Chris Wondolowski and co. generated shot after shot against NYCFC. However, none went in, and the Earthquakes will need to start turning those draws into wins, especially when they play like they did Friday.
————————-

OUTLOOK: D.C. United’s new signings looked good in Saturday’s draw, but a familiar face saved the day as Steve Birnbaum’s header helped D.C. steal a point from a conference foe. D.C. still needs time for Lloyd Sam, Patrick Mullins and Kennedy Igboananike to gel, but things are looking a bit better than they did a month or two ago.
————————-

OUTLOOK: New signing Giles Barnes look okay, but few of his teammates did much of anything in Saturday’s defeat. The defense was leaky all night, while the attack struggled to muster much of anything against an elite Rapids backline. The problems have persisted for the Whitecaps, who need to make a move soon in the crowded West.

OUTLOOK: Quite a performance by the Sounders, who thumped Orlando City behind standout efforts from their biggest stars. Clint Dempsey shined with a hat-trick, Jordan Morris showed off his playmaking chops and Nicolas Lodeiro pulled the strings. If that was a sign of things to come, the Sounders may just have some fight left in them.

OUTLOOK: The Lions crashed back down on Sunday after beginning the Jason Kreis era with a bang. As things stand, Orlando City’s postseason status remains very up in the air, and it appears Kreis has lots of work to do heading into the final stretch of the season. No matter how you slice it, five wins is not enough at this point of the campaign, even with the 11 ties.
————————-

OUTLOOK: Once again, the Revs started hot but were absolutely dominated as the game wore on. Sebastian Giovinco seems to score hat-tricks regularly these days and his goals on Saturday were top-class, but the Revs need to be better in defense going forward. To date, the Revs just haven’t taken the next step that many expected them to make with the signing of Kei Kamara.
————————

OUTLOOK: Once again, the Dynamo played well, but just couldn’t quite come away with the result required. Under interim boss Wade Barrett, the Dynamo continue to improve, but it’s quite clear that the pieces just aren’t there. Whether Barrett gets a chance to bring in those pieces as permanent coach is anyone’s guess, but the Dynamo need a bit of help.

OUTLOOK: The U.S. Open Cup remains the priority, but the Fire continue to stumble in MLS play. Several first team regulars got legitimate minutes in Saturday’s defeat, but could do little against RSL, which is slightly concerning ahead of the USOC semifinal.

THIS WEEK: vs. New York City FC on Saturday