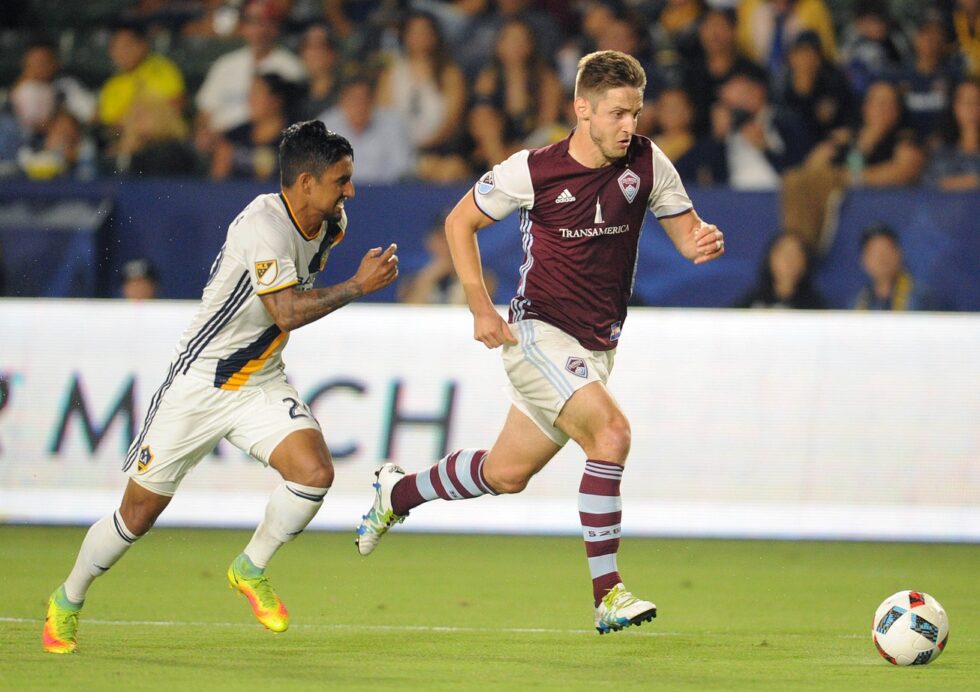 It was an indecisive week in MLS, as the top three and bottom three ranked teams all drew their respective matches.

Of the top six teams, only the New York Red Bulls managed to break through and secure a 3-1 victory over the Montreal Impact. It wasn’t enough to break into the tough top three of FC Dallas, the Colorado Rapids, and the LA Galaxy, despite their respective draws.

The biggest winners of the week were the Philadelphia Union who looked dominant in a 4-0 dismantling of the New England Revolution. The Seattle Sounders also benefit from a solid 2-1 win over Real Salt Lake. The Sounders’ Cascadia neighbors had a more difficult time, as both the Portland Timbers and Vancouver Whitecaps fell, 2-0, in their respective matches.

OUTLOOK: FC Dallas advances to the U.S. Open Cup finals with a thrilling 2-1 extra-time defeat of the LA Galaxy on Wednesday. FC Dallas’ second match of the week saw them split points with Sporting Kansas City in MLS play. A furious 10 minute period that saw the teams split four goals, capped off by a defensive mistake that was jumped on by Max Urruti. The draw left FC Dallas atop the Supporters’ Shield standings and keeps them unbeaten at home this season.

THIS WEEK: vs. Orlando City SC on Saturday

OUTLOOK: A clash of titans saw the Colorado Rapids enter the StubHub Center and leave with a point as they managed to draw the LA Galaxy and remain within striking distance of FC Dallas in the Supporters’ Shield standings with two matches in hand. Shkelzen Gashi provided the goal for the visitors, but the Galaxy quickly responded as Daniel Steres headed in a Steven Gerrard corner to bring the hosts level. All things considered, it was a solid draw, as Tim Howard made five saves to stall the Galaxy in a match they seemed likely to win.

OUTLOOK: On the other side of the coin from the Colorado Rapids, the LA Galaxy had a relatively disappointing week. After a heartbreaking 2-1 defeat in an exciting extra-time match at the hands of FC Dallas in the US Open Cup semifinals, the Galaxy had hopes of upending the Rapids at home. Dominant in nearly every statistical category, the Galaxy are likely kicking themselves after being forced to come from behind to salvage only a point. They’ll have no respite next week, with a trip to high-scoring New York City FC on the slate.

THIS WEEK: at Alianza on Tuesday (CCL), at DC United on Sunday

OUTLOOK: The New York Red Bulls earned a convincing victory over fellow Eastern Conference playoff contenders Montreal Impact over the weekend. While Ignacio Piatti led off the scoring for Montreal, it was bound to be Bradley Wright-Phillips day. The English forward scored a brace for his 58th and 59th regular season goals for the Red Bulls, setting the teams all-time record by surpassing Juan Pablo Angel. A 3-1 win and a bump in the standings only adds to his legendary day. A trip to rivals DC United is next on the agenda in MLS play after a midweek match, international-style, for the CONCACAF Champions League.
————————-

OUTLOOK: At the expense of the Red Bulls rising a spot in the standings, Toronto FC falls after drawing with the lowly Houston Dynamo on Sunday night. Cristian Maidana put the hosts ahead in the eighth minute, but the lead wouldn’t last long before Jozy Altidore leveled the score. The Dynamo went down a man just before halftime and had to hang on desperately as TFC dominated the remainder of the match, but could not break through to seize the Eastern Conference lead.

OUTLOOK: It was a whirlwind of a match in Columbus on Saturday and David Villa and Ethan Finlay dominated proceedings. Frank Lampard opened the scoring in the first half to give New York City FC the 1-0 lead heading into halftime. The second half would be much more exciting, featuring five goals and two penalties. The match was tied 2-2 entering stoppage time at the 90th minute. In the 92nd, Harrison Afful handled the ball in the box and Villa slotted the resulting penalty home for what seemed sure to be an NYCFC victory. But it was not to be as Ethan Finlay matched his brace with one of his own just minutes later as the Crew leveled at the death to steal a point back. A disappointing conclusion to the match for NYCFC, they’ll have to bounce back at home with the strong LA Galaxy coming to town.

OUTLOOK: Unfortunately for the Montreal Impact, they were on the receiving end of Bradley Wight-Phillips’ historic day. A goal from Ignacio Piatti wasn’t enough to overcome Wright-Phillips brace and Sean Davis’ late addition as the Impact fell, 3-1. They’ll hope for a reversal of fortune when they welcome the Chicago Fire this weekend.

OUTLOOK: Real Salt Lake found themselves on the receiving end of the Nicolas Lodeiro show this weekend, as he assisted one and scored one to help earn the Sounders a 2-1 victory. Joao Plata and Yura Movsisyan combined for a goal that wouldn’t be enough to drag Real Salt Lake back into a match they found themselves outplayed in. With the Supporters’ Shield leading FC Dallas coming to town next week, things don’t get any easier.

OUTLOOK: So much for the four-match winless streak. The Philadelphia Union bounced back in a huge way with a 4-0 thrashing of the New England Revolution in Foxboro. It took only two minutes for C.J. Sapong to put Philadelphia ahead, and the second half only exacerbated the issue for the Revs with Chris Pontius, Richie Marquez, and Roland Alberg all scoring goals. The last of these particularly stung the hosts as it was assisted by former fan favorite Charlie Davies. Also of note was the debut of Alejandro Bedoya, as the U.S. Men’s National Team star started and played 72 minutes for his new club.

THIS WEEK: at Central FC on Tuesday (CCL), vs. Vancouver Whitecaps on Saturday

OUTLOOK: Whereas FC Dallas was likely hoping for more of a result than a draw in Texas on Saturday, Sporting Kansas City ought to be thrilled to visit their MLS-leading opponents and snatch a point on the road. Dom Dwyer was huge as he secured his third brace of the season and increased his goal tally to 12 on the season. A midweek CONCACAF Champions League match away complicates a visit from the Vancouver Whitecaps on Saturday.
———————–

OUTLOOK: Winless on the road no more! It took 12 matches, but the San Jose Earthquakes finally managed to leave the confines of California and return home with three points. The Earthquakes led 2-0 all the way to stoppage time before the Vancouver Whitecaps snatched a last minute consolation goal to bring the final tally to 2-1. The Earthquakes welcome the Dynamo to California this weekend in another Friday night match.
————————-

OUTLOOK: If this is what the Seattle Sounders have to look forward to with Nicolas Lodeiro, the rest of the league better watch out. The Uruguayan dominated proceedings, opening his account with a goal and providing the assist on Jordan Morris’ eventual match-decider. Joao Plata tried to bring Real Salt Lake back into it, but the hosts managed to hold on and secure a victory heading into their rivalry match this weekend.

OUTLOOK: The biggest losers of the week, the Portland Timbers fell to DC United, 2-0, on Saturday.  The Timbers wilted early in the heat as Steve Birnbaum and Luciano Acosta scored within the first half hour to secure the 2-0 advantage that would take DC United to victory. The Timbers are hapless on the road, winless in 12 trips away from Providence Park. That doesn’t bode well as they travel to Seattle next week to take on the Sounders.

OUTLOOK: D.C. United rides into their big rivalry match against the New York Red Bulls on a high note, as they defeated the Portland Timbers, 2-0, at home. Goals from Steve Birnbaum and Luciano Acosta early on were enough to carry United to a full three points. D.C. United increases their record at home to a positive 5-4-3 as they welcome in a Red Bulls team that, for all their success, has only 1 win away from home this year.
————————-

THIS WEEK: at Sporting Kansas City on Saturday

OUTLOOK: Orlando City SC will certainly feel as though they allowed three points on the road to slip away as they surrendered a draw to the cellar-dwelling Chicago Fire. Kaka and Cyle Larin both scored as they continued their solid form, but an early goal from John Goossens and a late goal from Razvan Cocis secured a point for the Fire. Orlando City will have to travel to Colorado next week, where the Rapids have been utterly dominant, remaining unbeaten this year.
————————-

OUTLOOK: The Revolution were on the receiving end of the worst drubbing this week. The resurgent Philadelphia Union came to town with former fan favorite Charlie Davies in tow and obliterated the hosts, 4-0. A second minute goal from C.J. Sapong took the air out of the hosts, who couldn’t find the back of the net despite 18 shots and 9 corners in their favor. It’s the Revolution’s third consecutive loss, and they’ll hope to break that unfortunate streak when the Crew come to town next weekend.
————————

OUTLOOK: A draw against the red hot Toronto FC can be taken as a moral victory for the Houston Dynamo. In a match delayed by a day due to inclement weather, Toronto FC entered on a four-game winning streak, but were stalled by the Dynamo despite having a man advantage for a full half. Cristian Maidana provided the hosts with a lead, but Jozy Altidore scored his third in four matches to secure a point for the visitors. The assist on Maidana’s goal arrived courtesy of Muaro Manotas, who made his first start for the club.

OUTLOOK: Despite surrendering goals to the Orlando City duo of Kaka and Cyle Larin, the Chicago Fire managed to snatch a point back from the visitors in a 2-2 draw. John Goossens scored the opener only six minutes in, but Larin leveled things just minutes later. Kaka gave Orlando City the lead heading into the half, but a late goal from Razvan Cocis brought the match to its final score. A visit north of the border to Montreal is next as the Fire will look to steal points from the Impact.

OUTLOOK:  The Columbus Crew managed to snatch a point at the death from the Eastern Conference leaders thanks to the second goal of an Ethan Finlay brace. The Crew will be pleased to exit with a draw after surrendering a stoppage time penalty that led to a David Villa brace on the other end. They maintain a perfect record against NYCFC, sitting at 2-0-2 with one match left to play at the end of the season. Next up comes a trip to visit a New England Revolution team still licking their wounds from their beat-down at the hands of the Union.
————————-