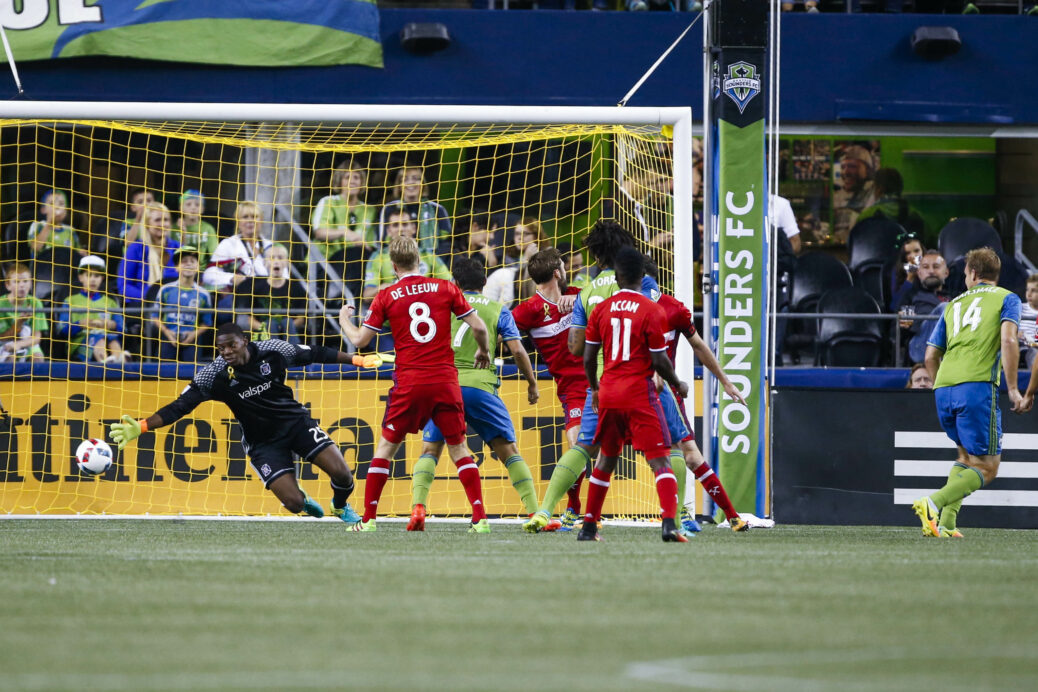 SEATTLE– The Chicago Fire are like an old-fashioned cure-all: good for whatever ails you. They were certainly just what the doctor ordered for the Seattle Sounders on Wednesday night, as the hosts delivered a 1-0 win in front of 39,269 at CenturyLink Field despite not playing their best soccer.

For weeks the Sounders have been clawing their way toward the so-called red line separating playoff teams from the also-rans. Thanks to a largely anemic effort by the Fire — owners of the worst record in MLS — the Sounders find themselves in the playoff spots for the first time since the opening week of the season.

The win at least temporarily advances the Sounders (12-13-5, 41 points) past the Portland Timbers for the sixth and final Western Conference playoff spot. The Sounders have now won three straight and still possess a game in hand on the Timbers. Seattle is 6-1-3 since signing Nicolas Lodeiro and replacing head coach Sigi Schmid with Brian Schmetzer in late July.

The win was not a thing of beauty, but a prosaic and workmanlike effort against an opponent that did not seem full of belief or especially capable of playing cohesive soccer. Midweek matches are often less than showcase displays of the beautiful game, and the Sounders in particular were coming off an emotionally draining, come-from-behind victory over the LA Galaxy on Sunday.

“Were they as sharp as they could have been tonight? No,” said Sounders interim head coach Brian Schmetzer. “But I think that was as to be expected. The game in LA was such a massive victory that they were a little flat. But, again, they somehow found a way to win. And that’s what you like about teams that can make the playoffs, and can do some good things in the playoffs.”

Chad Marshall opened the scoring on an Andreas Ivanschitz corner kick in the 24th minute, slipping into a wide swath of space in the heart of the penalty area and snapping a header past goalkeeper Sean Johnson. It was Marshall’s fourth goal of the season, and the eighth assist of the year for Ivanschitz.

It was yet another deadly corner from Ivanschitz, whose set pieces have become increasingly dangerous over the course of the season.

“That’s his game,” said Marshall. “That’s what he’s known for: he serves a great ball. It’s just a matter of making good runs, and fortunately I was able to get on the end of it.”

It was all the scoring the Sounders would need against a Fire team that never truly threatened until the 91st minute, when substitute David Arshakyan fired a one-touch shot off a loose ball, forcing goalkeeper Stefan Frei into a diving save.

“I don’t think tonight was our best soccer by any means,” said Marshall. “But we were able to grind it out and get a result and a huge three points at this point in the year. We need to win our home games, and we did that tonight.”

Victory came with a cost, however. Lodeiro picked up a yellow card for impeding a free kick and will miss Sunday’s critical match against the Vancouver Whitecaps due to yellow card accumulation.

“We’ll certainly address that with Nico,” said Schmetzer, “because, you know, we don’t want him to get a yellow card for something like that.”

“It was naive on my part,” Lodeiro said through a translator, calling the play a mistake he will learn from.

Wednesday night was always going to be an uphill battle for the Fire, who have now lost four of their last six and have beaten the Sounders just once in 11 all-time matches. Chicago has just a single road win this season, and has never won at CenturyLink Field. Only in late August did the Fire finally snap a league-record 36-game road losing streak that spanned parts of three seasons.

And yet the Fire (6-15-9, 27 points) were not without chances, at least in the first half. In just the 11th minute Designated Player David Accam, so crucial to whatever promise the Fire’s future holds, floated an open look over the crossbar. Twice he fired into defenders. In the 41st minute Arturo Alvarez sent a free kick from the corner of the 18-yard box into the side netting.

“I think the result is disappointing,” said Fire head coach Veljko Paunovic, “especially because I think our guys played with pride today. I think we played very consistent (soccer). I think we had our opportunities, which we had to convert better.”

The Sounders had multiple chances to add an insurance goal in the second half, but could never quite find the final touch. Perhaps their best opportunity was a 72nd-minute Joevin Jones cross that missed both Jordan Morris and Nelson Valdez by mere inches inside the 6-yard box.

Chad Marshall. The towering center back provided clutch scoring early in the season when the Sounders were desperate for goals. He came through again on Wednesday with the game-winner, and is somehow the Sounders’ third-leading scorer in 2016.

David Arshakyan nearly provided the visitors a miraculous road point in stoppage time, but Frei dropped low to preserve the victory for the Sounders.

Osvaldo Alonso has rendered many an attacker impotent, and Michael de Leeuw struggled all night.