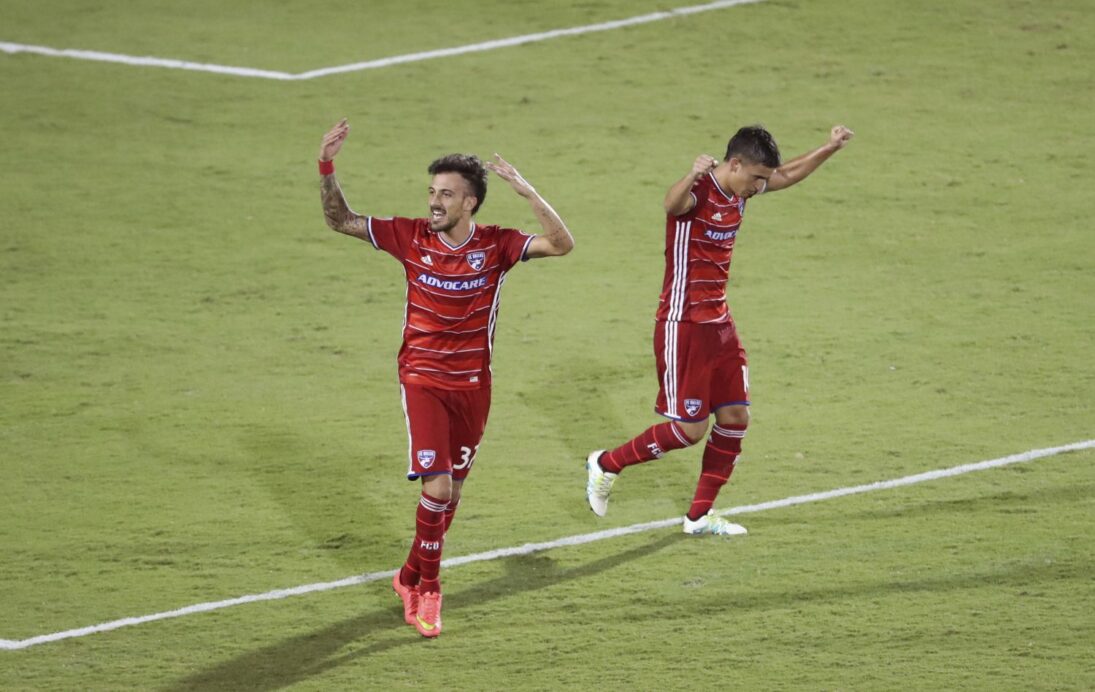 FC Dallas’ 19-year trophy drought is over, and it was ended in emphatic fashion.

Mauro Diaz scored once and set up three goals, two of them to Maxi Urruti, as FC Dallas defeated the New England Revolution 4-2 at Toyota Stadium on Tuesday to win the U.S. Open Cup.

FC Dallas hadn’t won a major title since 1997, when it last lifted the Open Cup. It was the longest drought in MLS prior to Tuesday night’s final. The Revolution’s dry spell now stands at nine years having not won a trophy since 2007.

The visitors were in good shape after six minutes when Juan Agudelo struck after a stunning turn and finish, silencing the crowd in Frisco.

However, the hosts immediately responded with a lovely strike of their own through Urruti. Diaz picked out the Argentinean forward, who then flicked the ball over Je-Vaughn Watson before finishing with power off a half-volley to pull level with the Revs.

FCD took control of the game after their equalizer with Diaz leading the way. The Western Conference powerhouse kept mounting shot after shot, but could not find a way through the Revs’ backline. That was until Diaz launched an inch-perfect cross to the head of Matt Hedges, who made no mistake from a few yards out for FCD’s second goal.

Hedges returned the favor on the stroke of halftime after Jose Goncalves hauled down the defender in the box. Diaz converted the ensuing penalty to extend the hosts’ lead to 3-1.

The Revs began the second half down two goals and was dealt a couple of blows when Watson and midfielder Gershon Koffie were forced off with injuries. Kei Kamara entered the match late in the first half, but made little impact.

FC Dallas cranked up the pressure in the second interval as Diaz found Urruti with an exquisite through ball, before the striker calmly slotted the ball past Brad Knighton to complete his brace and push the lead to three.

Agudelo grabbed a brace of his own with a consolation goal in the 73rd minute. The 23-year-old is gaining form at the right time with a playoff spot in sight for the Revs, as Agudelo has now scored four times in his last three appearances in all competitions.

The postseason will be New England’s last hope of salvaging its campaign. FC Dallas will surely be there come October and a treble remains within sight as the club battles for the Supporters’ Shield and MLS Cup.

When FC Dallas is clicking, Mauro Diaz is usually the catalyst and that was the case on Tuesday night. He was dictating the tempo all game long and was spraying passes across the pitch with ease.

Not to be outdone by Juan Agudelo after he opened the scoring the Revolution, Maxi Urruti responded with a lovely powerful half-volley to level the match at 1-1. The goal reinvigorated FC Dallas and the hosts could not be stopped after the stunning equalizer.

The Revolution defense was woeful all night long, but Je-Vaughn Watson was especially disappointing. Urruti flicked the ball over Watson before scoring Dallas’ first goal, then the Jamaican was caught of position on a few occasions. He was eventually substituted at half-time after picking up a groin injury.