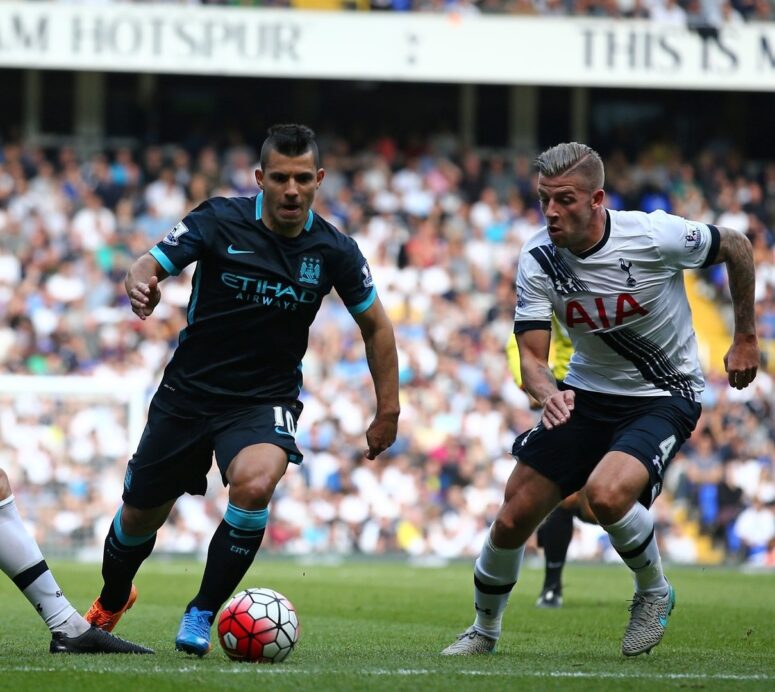 It’s another week that’ll see all eyes on England in European football.

The clear headliner around the continent (plus the British Isles) is a top-two showdown in the Premier League between Tottenham and Manchester City. The only two unbeaten teams left in the EPL enter after midweek Champions League play, with Man City failing to win for the first time under Pep Guardiola and Tottenham cruising to a victory.

The Spanish Primera Divison’s three giants all return to action on Sunday, facing off against respective mid-to-low table opponents.

Bundesliga play resumes with two big Saturday clashes between two unbeaten teams in Bayern Munich and FC Koln as well as a big-name showdown between Bayer Leverkusen and Borussia Dortmund.

Serie A features a clear headliner as well, when Roma welcome Inter to town in a huge showdown.

Meanwhile, Ligue 1 may be the most entertaining of the bunch. Paris Saint-Germain and Monaco face their respective opponents on Saturday, but league-leaders OGC Nice return to action on Sunday in a league where it truly feels like anyone can win or lose on a given match-day.

Here’s a closer look at this weekend’s European matches:

The Premier League weekend begins with a showdown between Christian Benteke and Romelu Lukaku as 5th-place Everton and 7th-place Crystal Palace at Goodison Park.

Saturday’s matches are headlined by an early morning Liverpool visit to Wales to face Swansea City, who reportedly met with former U.S. Men’s National Team and current Le Havre manager Bob Bradley recently. Current boss Francesco Guidolin will have to try and contain the Reds’ explosive attack, who are second in goals in the league with 16 goals in six matches.

But the EPL’s biggest match of the weekend will be at White Hart Lane, where Tottenham Hotspur host Manchester City in a matchup of first versus second. Guardiola’s men failed to win for the first time this season in a crazy 3-3 draw in Glasgow against Celtic in the Champions League midweek, while Spurs got their first victory in the competition in Moscow. Tottenham will have to face the league leaders without star striker Harry Kane, who is sidelined for four to six weeks after suffering ankle ligament damage.

La Liga returns to action with a ‘real’-ly solid match-up between Sociedad and Betis on Friday afternoon. The two mid-table teams are neck and neck at 10th and 11th respectively and each is seeking to take a big step forward to the top half of the table.

Saturday provides an interesting appetizer to Sunday’s main course. While Granada takes on Leganes and Sevilla takes on Alaves, dead-last Osasuna faces Las Palmas, who are soaring and sit only four points behind leaders Real Madrid.

Real Madrid will seek to maintain that cushion on Sunday as they face Eibar at home. Their primary title rivals Atletico Madrid and Barcelona also play on Sunday against Valencia and Celta Vigo respectively.

RB Leipzig are one of only three teams remaining undefeated after five weeks of Bundesliga play (Bayern Munich and FC Koln are the others), and seek to make it six-straight unbeaten as they open the weekend against mid-table Augsburg

Saturday features two titanic matches, as a top-three clash between Bayern Munich and FC Koln headlines the action. Not to be overlooked, however, is a strong match between Bayer Leverkusen and Borussia Dortmund as well.

Sunday sees poor Schalke, with 5 losses in 5 matches and zero points, try and earn their first positive result of the season against a strong Borussia Monchengladbach team.

Saturday features the return of Serie A, as two top-seven teams take on a pair of clubs in the bottom half. Seventh-placed Chievo faces Pescara before fifth-placed Lazio takes on lowly Udinese.

It’s Sunday that contains the bulk of the action though, especially considering its closure with a titanic clash between Inter and Roma to end the weekend. A top half clash between AC Milan and Sassuolo also figures to provide entertainment on a busy day.

A mid-table clash on Friday welcomes back a Ligue 1 season that has been the most entertaining in recent memory, as Rennes welcome Guingamp.

Saturday sees Paris Saint-Germain and Monaco return to action, with neither in control of the league and looking up as they face Bordeaux and Metz respectively.

Sunday heralds the return of the actual league leaders, OGC Nice, as they welcome Lorient to town. The weekend closes with a nice match between Lyon and ASSE.

Who will emerge on top in England’s marquee clash? Will Inter or Roma establish themselves as true title contenders?