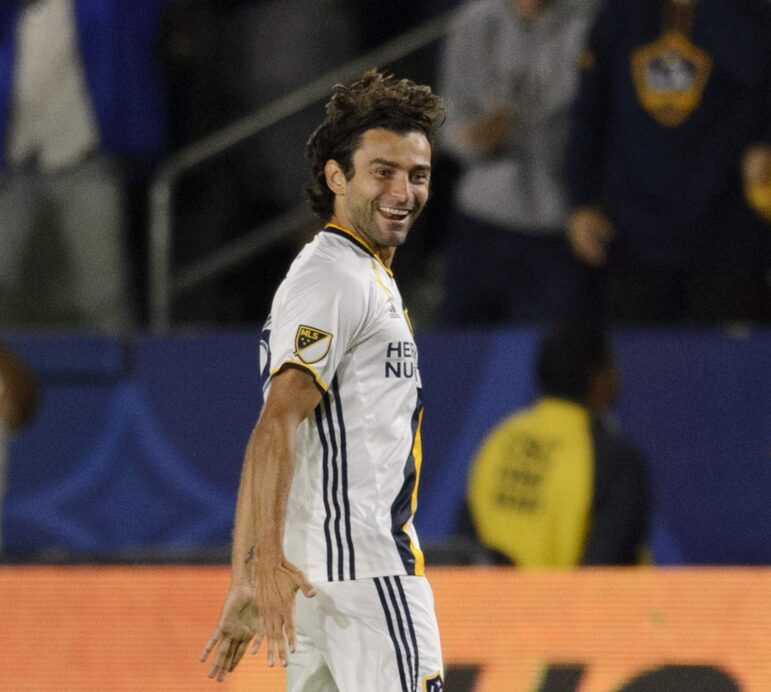 CARSON, Calif. – The LA Galaxy left it late, but finally unlocked the offense that had been missing for most of August, pulling away from the Columbus Crew, 2-1, on a pair of gorgeous goals by Baggio Husidic and Giovani Dos Santos.

Husidic’s wonder strike came fourteen minutes after being subbed on for an ineffective Mike Magee.  Sebastian Lletget worked the ball to the Crew endline, then laid it back to Husidic about 25 yards from goal.  Husidic had enough time to settle the ball before crushing a cannon shot into the far upper 90 past a sprawling Crew goalkeeper Steve Clark.

Giovani Dos Santos, who has faced much criticism lately for his lack of production in the absence of Robbie Keane, finally silenced some of those critics with a sparkling breakaway run down the center of the pitch, followed by a delightful chip over the head of the hard-charging Steve Clark.

The victory was Bruce Arena’s 200th MLS regular season victory, joining Sigi Schmid as the only coaches to reach that mark,

The Galaxy have been walloped by injuries and player movement recently.  Captain Robbie Keane has missed the last two matches due to international duty with the Republic of Ireland, his last.  Last week, starters Steven Gerrard, Gyasi Zardes, and Jelle Van Damme all went down with injuries, Zardes’ being the most serious with a broken foot.  Dutch international Nigel DeJong was allowed to depart the club on a free transfer to Turkish side Galatasaray, leaving the Galaxy without five players who formed the core of their starting lineup for the entirety of the season.

As a result, the Galaxy’s offense, which had failed to score in two of their last three games, once again seemed disjointed.  A frustrated Bruce Arena could be seen yelling at his attacking players, and his players were yelling at one another.

All that changed when Husidic’s golazo hit the back of the net.

Columbus was not without their own roster difficulties, missing four starters, including Tony Tchani, Will Trapp, and Justin Meram.  They dressed only seventeen players, had no center midfielders, and were forced to bring on an attacker at the half to replace center back Gaston Sauro, who was limited to only 45 minutes by the medical staff.

Still, with 12 minutes left, it appeared as if the Crew would depart the Stub Hub Center with a well-earned point.  That is, until Husidic reignited the Galaxy offense and sent the Crew home disappointed.

The Crew did manage to cut the lead in half in extra time when Daniel Steres knocked down Adam Jahn in the penalty area.  Ola Kamara missed the ensuing penalty kick on a great save by Brian Rowe, but Jahn raced in to poke home the rebound.

The Galaxy have a two-game week ahead of them, with a mid-week trip to Rio Tinto and a game against the Real Salt Lake, before returning home to host Orlando City SC for the first time.  The Crew return home to face Vancouver next Saturday.

Baggio Husidic thought he might have earned a start with so many Galaxy players on the injury list.  Instead, Galaxy head coach subbed the versatile midfielder on in the 65th minute.  Husidic responded by firing the strike of his career, smashing a knuckling ball from 25 yards that fooled Crew goalkeeper Steve Clark high and wide and gave the Galaxy their first win in seven games.

The goal by Husidic completely changed the mood inside the Stub Hub center, was well as the mood on the pitch.  The Crew seemed shocked that the typical “bunker in and try to score on the counter” strategy that has worked for other teams against the Galaxy recently had somehow let them down.  The Galaxy’s relief and newfound joy for the game of soccer resulted in another goal only four minutes later, and sealed the victory for the Galaxy.

Ola Kamara’s form has slipped enough that he probably needs to start looking over his shoulder each time Crew head coach Gregg Berhalter names his starting 11.  On Saturday, the striker managed no shots on goal, except for the PK he took in extra time, which he missed badly.