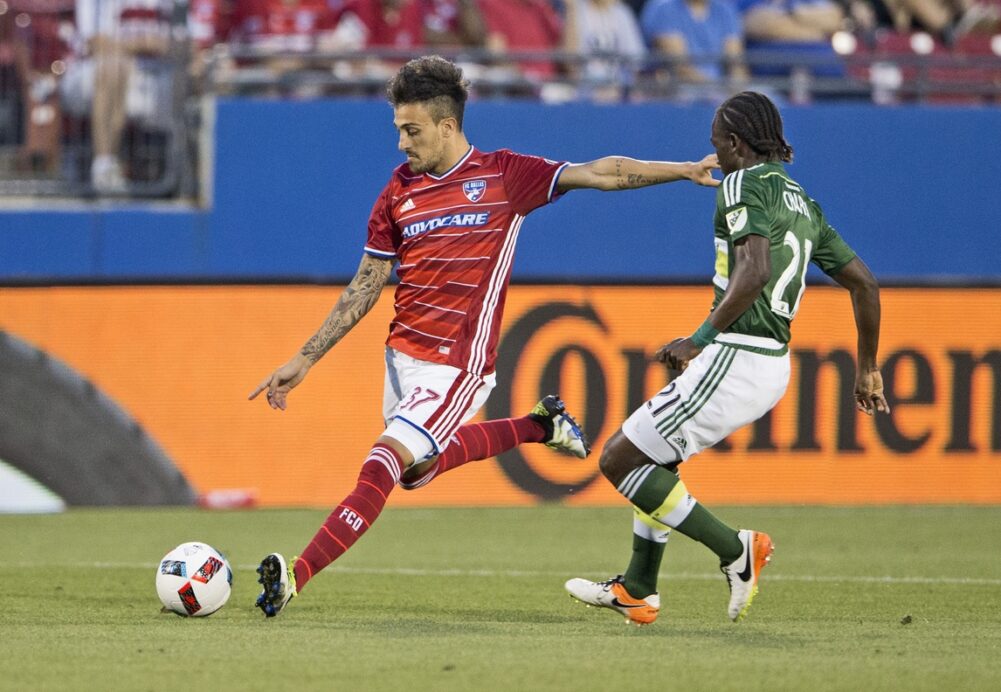 This weekend may be dominated by the international break, but there are still plenty of games in MLS as the regular season begins to wind down.

A key showdown in the Western Conference between the Portland Timbers and FC Dallas highlights Week 28. The former is in a tight battle to make the playoffs, while the latter tries to maintain its lead in the Supporters’ Shield race.

Elsewhere, The New York Red Bulls, who are chasing NYCFC, are also in action against the struggling Vancouver Whitecaps, while the LA Galaxy look to bounce back from a frustrating week against the Columbus Crew.

Here is a closer look at all six games.

One team is battling for its playoff life, while the other is in the thick of a Supporters’ Shield race.

The Vancouver Whitecaps finally snapped a four-game losing streak with a 0-0 draw versus the LA Galaxy last week. However, the Whitecaps still haven’t won an MLS match since July 13. The New York Red Bulls, on the other hand, cannot be stopped these days. The reigning Supporters’ Shield champions haven’t been defeated since the Hudson River derby on July 3. The Whitecaps can move within a point of sixth place in the Western Conference with a victory, and the Red Bulls could top the East with three points. They will have Dax McCarty and Damien Perrinelle back, but Sacha Kljestan will be absent due to his recent U.S. Men’s National Team call-up

The Colorado Rapids will use one of their games in hand this weekend when they face the hapless New England Revolution on Saturday.

A victory could move the Rapids within two points of the league leaders FC Dallas. The Rapids are unbeaten at home, but have won just once in their last six matches. The good news for them is the Revolution are woeful on the road, posting a 1-8-4 record. They also haven’t scored in four straight games. For the Rapids, Tim Howard will be out of action as he joins the USMNT while Jermaine Jones will miss out due to injury.

The Chicago Fire could still hypothetically qualify for the postseason, but a loss to the Philadelphia Union would almost surely rule them out of contention.

The Union are coming off a convincing 2-0 win over Sporting Kansas City last week and will be riding high. The Fire were thrashed by D.C. United in their previous game, so a strong response should be expected. Philadelphia could be missing Ilsinho and Brian Carroll, so if there was ever a chance for Chicago to record an upset, it’s this weekend.

The marquee match of the weekend has massive playoff implications in the Western Conference.

FC Dallas needs a win in order to separate itself from the Colorado Rapids and Real Salt Lake, who trail the Texan side by five points. The Portland Timbers will surely be pumped up after their huge 4-2 win over the Seattle Sounders last Sunday. With only a three-point gap separating the Timbers and the San Jose Earthquakes in seventh, they have to earn a result on the road in the Frisco heat. International call-ups have claimed the likes of Kellyn Acosta and Darlington Nagbe, leaving both teams without several key pieces.

A depleted LA Galaxy side will host the Columbus Crew, who are surprisingly still in the playoff race.

The Galaxy are winless since July 23 and are now missing Steven Gerrard and Jelle Van Damme. Meanwhile, Gyasi Zardes has a broken foot and will be out for the remainder of the year, while Nigel de Jong has departed the club for Galatasaray. The Crew are banged up themselves, though, as Gaston Sauro, Waylon Francis and Wil Trapp are all hurt. However, given Columbus’ small resurgence and equally key injuries, it could shock LA on Saturday night, and they will need to if they hope to keep pace in the East.