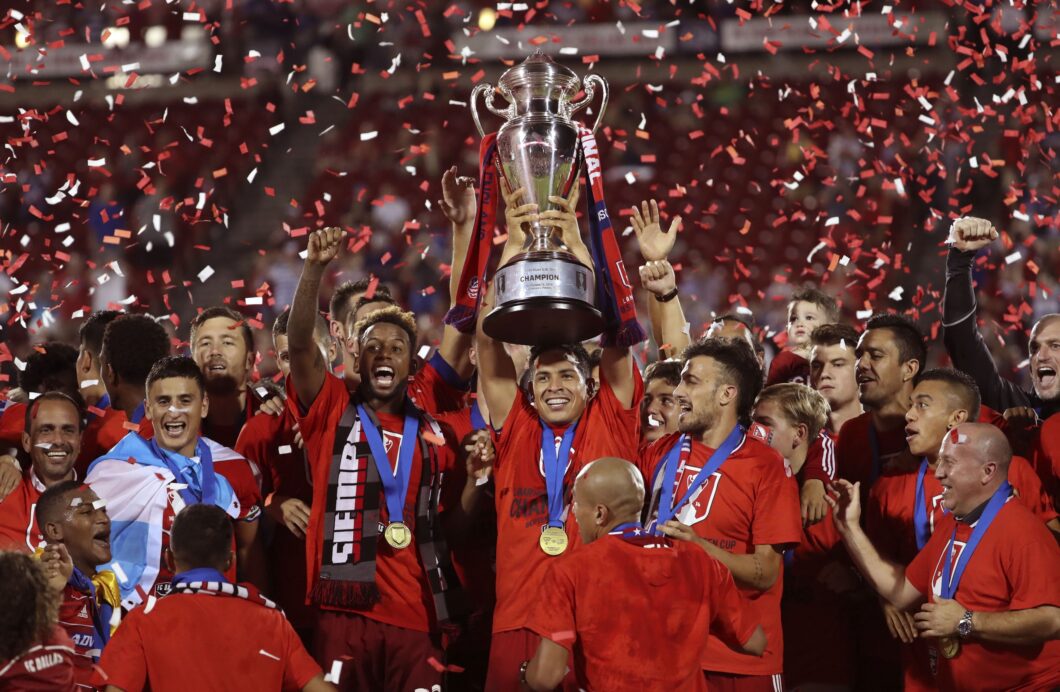 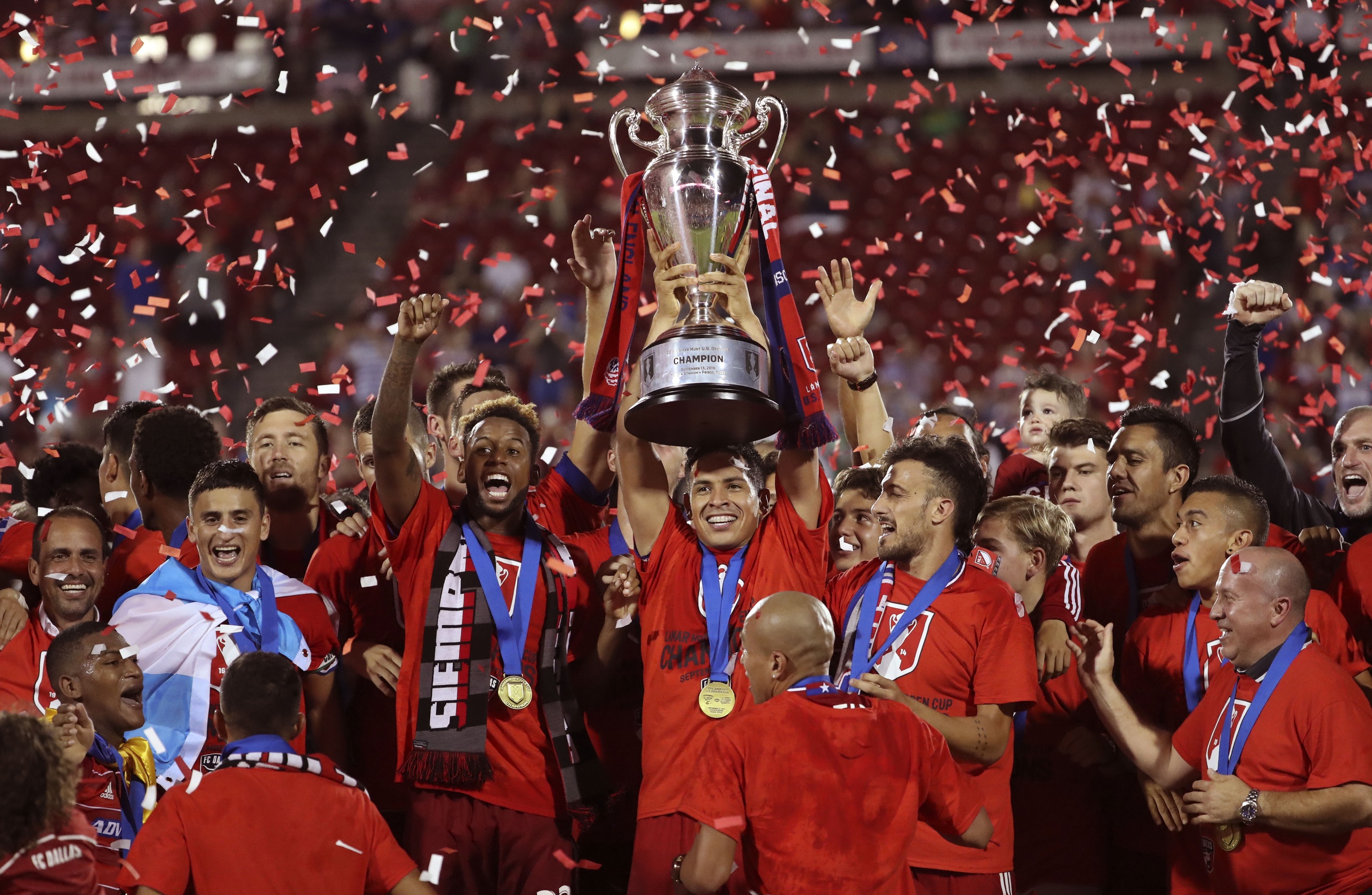 There were a number of monumental results in MLS this past weekend as the regular season winds down. The biggest surprises occurred in the Western Conference as a few teams have moved back into the Supporters’ Shield race.

Who were the biggest movers after a weekend of shock results?

OUTLOOK: FC Dallas suffered its first home loss of the season after falling to the Colorado Rapids. Head coach Oscar Pareja rotated his lineup ahead of Tuesday’s U.S. Open Cup , so a narrow 1-0 defeat is not a devastating result. Winning the U.S. Open Cup title helped snap the team’s 19-year trophy drought. FCD is also still ahead by five points in the Supporters’ Shield standings. The teams below have at least one game in hand, but the Hoops are in good shape entering the final stretch of the regular season.

THIS WEEK: at Sporting Kansas City on Sunday.

OUTLOOK: Landon Donovan’s highly-anticipated return dominated the headlines on Sunday, but it was Giovani dos Santos who impressed in the LA Galaxy’s matches this past week. Even in the 3-3 draw with Real Salt Lake, the Mexican international was the most dangerous player on the pitch. Dos Santos recorded four goals and three assists combined against RSL and Orlando City SC, completing braces in both games. Now that Keane is healthy and Donovan is back in the fold, LA is only going to improve from here on out.

THIS WEEK: vs. New York Red Bulls on Sunday.

OUTLOOK: No Sebastian Giovinco, no problem for Toronto FC, which went into Bridgeview and brushed aside the Chicago Fire. Jozy Altidore scored his sixth goal in eight games and the entire team still looks solid despite some key injuries. The victory moved TFC to the top of the Eastern Conference with a match in hand, and the Reds are looking like an outside favourite to win the Supporters’ Shield, especially once Giovinco returns.

THIS WEEK: vs. San Jose Earthquakes on Saturday.

OUTLOOK: The Colorado Rapids conquered a rotated FC Dallas on the road, which has them back in the Supporters’ Shield race. The absence of Jermaine Jones makes the result even more impressive, but the win will mean very little if Colorado fails to capitalize on its games in hand and does not close in on Dallas.

THIS WEEK: at Toronto FC on Sunday.

OUTLOOK: For the first time since Red Bull Arena opened, the New York Red Bulls failed to win after taking a 2-0 lead. They had to settle for a draw with D.C. United, who won the Atlantic Cup as a result. The Red Bulls are still unbeaten since July 3 and are slowly returning to full fitness, but closing out games has been an issue, especially on the road where a match against a red-hot Toronto FC awaits the 2015 Supporters’ Shield winners.

THIS WEEK: vs. Houston Dynamo on Sunday

OUTLOOK: As impressive as Real Salt Lake’s performance was against the LA Galaxy, the team was sloppy at the back for the majority of the game, which is cause for concern. RSL managed to stay compact at the back on Saturday versus the Portland Timbers, but struggled to score. To add insult to injury, Javier Morales is hurt, which could end the Claret and Cobalt’s hopes of claiming the top spot in the Western Conference.

OUTLOOK: New York City FC has been somewhat inconsistent since the end of July. It has won just twice in its previous six games, but has only lost two matches. Playoffs are still very much in sight, but conceding an average of twice a game since Aug. 13 is not an encouraging sign heading into the postseason.

THIS WEEK: at Portland Timbers on Saturday.

OUTLOOK: The Philadelphia Union have been riding different waves of form over the past few weeks. The Union’s 1-1 draw with the Montreal Impact is not a poor result and it keeps them in the hunt for a home playoff game. Philadelphia is quietly one of the most consistent sides in the Eastern Conference, so barring a disastrous end to the regular season, it is in good shape.

OUTLOOK: The Portland Timbers extended the gap between the themselves and the teams below the red line in the Western Conference. Despite being winless on the road in 2016 and without Nat Borchers to boot, Portland is picking up momentum at the right time.

THIS WEEK: vs. LA Galaxy on Sunday.

OUTLOOK: Sporting Kansas City’s collapse against the Houston Dynamo at home marked the fifth time in six games that it failed to win a match. Sporting is still five points above seventh place in the Western Conference, but this is now the third season in a row in which SKC has struggled down the stretch. Injuries haven’t helped and the team is slowly returning to full health, but it has to return to winning ways soon.

OUTLOOK: The playoffs are still a possibility for the Seattle Sounders, although a draw leaves them six points behind the final spot in the Western Conference. Nicolas Lodeiro now has three goals and six assists on the season, and is single-handedly keeping the Sounders alive in the postseason hunt. Crucial matches against the Vancouver Whitecaps and LA Galaxy could determine Seattle’s fate.

OUTLOOK: Suddenly, the New England Revolution have rekindled their form. They have recorded back-to-back victories over the Colorado Rapids and New York City FC, who have been two of the most solid teams in MLS this season. The Revs are only one point away from a playoff spot thanks to a resurgent attack and a decrease in individual mistakes at the back.

OUTLOOK: It was a tale of two matches for Orlando City this past week. The emphatic 4-1 win over the Montreal Impact was one of Orlando’s most complete performances of the season, with Matias Perez Garcia impressing on Wednesday. However, the defeat in LA was a major disappointment, especially in the second half. The Lions are still clinging to the last playoff spot in the Eastern Conference, but if they can replicate that showing in Montreal, they will be in safe hands.

THIS WEEK: vs. New England Revolution on Saturday.

OUTLOOK: Somehow, the Montreal Impact are still in a playoff spot. They managed to grab a point in Philadelphia, but the Impact have recorded just one win in their last six games. The defense has been porous, the attack has dried up and with only six games left, Montreal is desperately clinging to fifth place in the Eastern Conference, but how long will it stay there?

THIS WEEK: at the Seattle Sounders on Saturday.

OUTLOOK: Not only did the Vancouver Whitecaps beat the Columbus Crew, they also managed to score multiple goals in an MLS match for the first time since July 16. The Whitecaps are still four points adrift of a playoff spot and there are questions surrounding their offense, even after this performance. However, a comprehensive road win is a positive sign.

THIS WEEK: at the Chicago Fire on Friday

OUTLOOK: Just when it appeared as if D.C. United was en route to its second consecutive loss, it managed to fight back and recover a point at Red Bull Arena. Much like the previous match at RFK Stadium, D.C. did not give up and overcame a poor first half to salvage a result. While that resolve is admirable, United needs to be consistent earlier in matches. It is only one point away from the playoffs, so just a couple of complete performances could be enough to guide it into the postseason.

OUTLOOK: The San Jose Earthquakes have two games in hand over the sixth-placed Portland Timbers, but as seen against the Seattle Sounders, the Quakes’ injuries and decline in scoring could lead to their downfall.

OUTLOOK: The Houston Dynamo played with a fighting spirit on Friday that has been rarely seen this season. Despite trailing 2-0 on the road in Kansas City, the Dynamo managed to recover and drew 3-3 at the death. If Houston played with this amount of resilience, it would be a lot higher in the standings.

THIS WEEK: vs. D.C. United on Friday.

OUTLOOK: Even though the final score was close, Toronto FC thoroughly dominated the Chicago Fire. The likes of Matt Polster and Jonathan Campbell have impressed this season, but it’s clear that the Fire have a lot of work to do over the winter.

LAST WEEK: Lost to the Vancouver Whitecaps 3-1 on Saturday.

THIS WEEK: at Orlando City SC on Saturday.

OUTLOOK: The playoffs are fading away for the Columbus Crew after losing to the Vancouver Whitecaps. Conceding three goals at home to a team that was having scoring issues prior to Saturday is a sure sign that Columbus will be playing for pride, barring a miracle down the stretch.