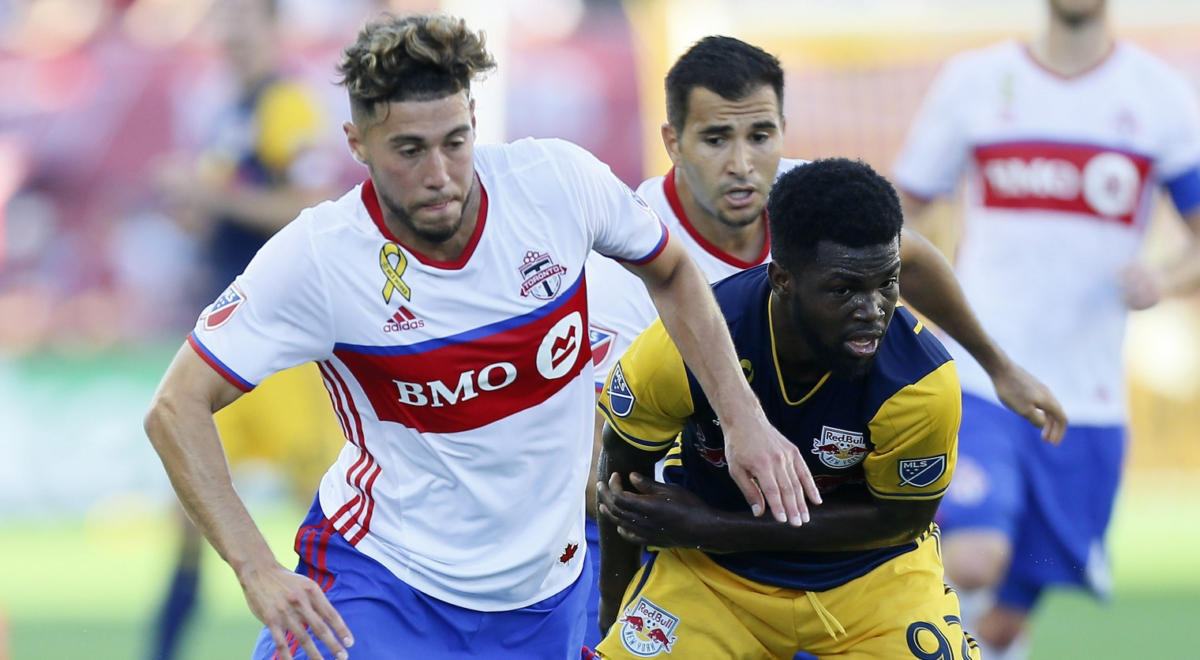 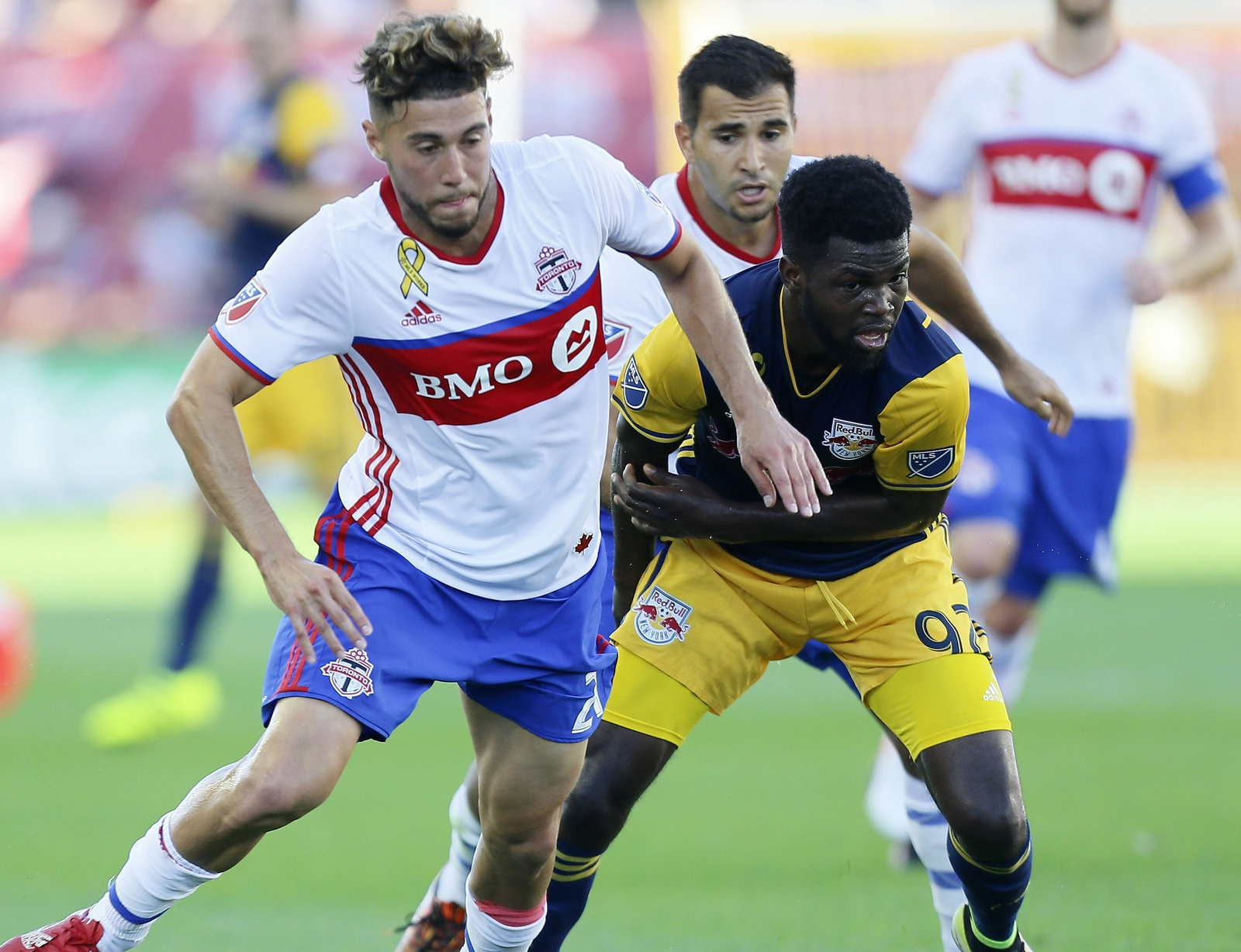 It was an exciting slate of matches featuring last-minute misses and goals this week in MLS.

New York City FC and FC Dallas best exemplified the late action as each missed one-on-one opportunities in the final moments and failed to claim victory in an exciting 2-2 draw. Elsewhere, a 92nd-minute goal from Bobby Boswell saw D.C. United claim a point from the Chicago Fire on the road.

The goal of the weekend came from Los Angeles, as Landon Donovan drew the LA Galaxy level against Sporting Kansas City with a second-half super-sub goal for the visitors. Meanwhile, in Canada, Toronto FC and the New York Red Bulls played a thrilling 3-3 draw, with Jozy Altidore scoring a double to keep the race at the top of the Eastern Conference tight.

OUTLOOK: Can anything remove FC Dallas from the top perch of these rankings? The current league leaders followed up their mid-week U.S. Open Cup final victory by travelling to New York City FC and coming away with a point in an exciting 2-2 draw. Each team will feel like they should’ve earned more, given that both had one-on-one opportunities in the closing moments, so a draw is probably a fair result. FCD will have a tough match this week at Real Salt Lake, who got the better of them last time they met with a 1-0 victory.

THIS WEEK: vs. Seattle Sounders on Sunday.

OUTLOOK: Amid the absence of Giovani dos Santos, another forward stepped up for the LA Galaxy and secured a draw late on Sunday. After surrendering two second half goals to fall behind 2-1, the Galaxy turned to Landon Donovan to save the day. The star forward entered in the 74th minute and wasted absolutely no time in linking up with Robbie Rogers just two minutes later to bring the Galaxy level against their Western Conference foes. Dos Santos should return to the lineup this weekend against the Sounders, but the Galaxy surely wouldn’t be opposed to a little more Donovan magic to help.

OUTLOOK: Toronto FC likely hoped for all three points at home against the New York Red Bulls last Sunday, but this draw felt as close to a win as possible. Down 3-1 to the visitors and rivals for the Eastern Conference’s top spot, TFC was blessed by some Jozy Altidore magic to come back and claim a point. Altidore launched a beautiful free kick into the back of the net to drop the deficit to one before linking up with Michael Bradley to finish off his brace and the TFC comeback. Another difficult match with the Philadelphia Union is on the schedule this week, as TFC continues its march to the playoffs.

OUTLOOK: The Colorado Rapids scoreless draw against the San Jose Earthquakes on Saturday served as a microcosm of their season to this point: A brilliant defensive showing, and not much to show offensively. The two teams could only manage a combined five shots on target, with the best opportunity going the Earthquakes way as Tim Howard was forced to make a great kick-save just before halftime to preserve the score. While safely in the playoff picture, the Rapids will need to sort out their offensive woes if they want to make a deep run, starting this weekend when the Vancouver Whitecaps come to town.

OUTLOOK: Counter to Toronto FC, this draw couldn’t feel more like a loss. One week after collapsing against D.C. United at home after possessing a two goal lead, the New York Red Bulls did the same on the road in Toronto. Bradley Wright-Phillips brace (making him the first player with two 20+ goal seasons in MLS history) saw the visitors take a 3-1 advantage into the latter parts of the second half. But the win was not to be, as Jozy Altidore scored first on a free kick and then on a Michael Bradley assist to record a brace of his own and snatch a point back for the hosts. The Red Bulls return to the comforts of home this weekend as they face the Montreal Impact.

THIS WEEK: vs. Chicago Fire on Friday.

OUTLOOK: It was a thrilling finish at Yankee Stadium, but ultimately neither New York City FC nor FC Dallas could finish clear-cut chances to seize three points as the two battled to a 2-2 draw on Saturday night. A late goal from Khiry Shelton left fans ecstatic at a draw against the top team in MLS, but a terrible miss from Steven Mendoza late left a sour taste. They’ll look to improve one point to three points when they welcome the Chicago Fire on Friday.

THIS WEEK: vs. FC Dallas on Saturday.

OUTLOOK: The undefeated home streak of 2016 is now over, as Real Salt Lake suffered their first home defeat of the season to the Houston Dynamo on Saturday. RSL was stunted offensively, managing to get off a decent 15 shots, but only landing one of those on target. Instead it was the Dynamo’s Alex who found the back of the net and secured three points for the visitors. The result sees each team retain their spot in the standings, but RSL face a very difficult FC Dallas team next weekend as they seek to return to winning home form.

THIS WEEK: at Houston Dynamo on Saturday.

OUTLOOK: The Portland Timbers continued their sizzling home form against the Philadelphia Union on Saturday, securing a 2-1 victory during a chaotic beginning to the second half. The victory is both the Timbers 11th overall and their 11th at home, leading MLS in the latter category. The unfortunate flip side of this is that they remain winless on the road as they visit the Houston Dynamo this week in Texas.

THIS WEEK: at LA Galaxy on Sunday.

OUTLOOK: The Seattle Sounders came out on top of a big-time playoff battle against the Vancouver Whitecaps last weekend. The 1-0 victory sees them move into seventh in the West, only five points behind Sporting Kansas City but with two matches in hand, meaning they now control their destiny. Their battle for a playoff spot continues with a difficult match against the second place LA Galaxy.

OUTLOOK: A frantic beginning to the second half saw the Philadelphia Union end up on the wrong side of a 2-1 scoreline against the Portland Timbers on Saturday. Diego Valeri put the hosts up before Chris Pontius equalized just moments later. Unfortunately for the Union, it was only another 6 minutes before Fanendo Adi put the Timbers up for good and sent the visitors into their third straight winless result. It gets no easier for the Union, facing top of the East Toronto FC in Toronto on Saturday.

THIS WEEK: at Columbus Crew on Sunday.

OUTLOOK: After suffering a tough mid-week loss in the U.S. Open Cup finals to FC Dallas, the New England Revolution continued their red hot MLS form last weekend. The Revs secured their third straight victory by visiting the Montreal Impact and returning home with a 3-1 victory and all three points. They’ll face the lowly Columbus Crew on Sunday, currently holding the sixth and final playoff spot in the East with D.C. United and Orlando City hot on their tails.

OUTLOOK: Some late heroics from Landon Donovan stymied Sporting Kansas City as they were forced to settle for a draw against the LA Galaxy on Sunday. Second half goals from Jacob Peterson and Dom Dwyer weren’t enough to prevent the MLS legend from acting as a super-sub extraordinaire as Sporting KC surrendered their lead in the 76th minute and dropped two potentially crucial points as they battle on the playoff fringe. They continue that battle against the San Jose Earthquakes this Saturday.

OUTLOOK: Orlando City will be kicking themselves after dropping all three points at home while getting thrashed by the lowly Columbus Crew, 4-1, on Saturday. Even worse, their main playoff rivals earned points, with the New England Revolution securing a win and D.C. United getting a draw. This leaves the Lions outside looking in, even on points and matches with DCU and two points behind the Revs with a match in hand. That adds serious weight to this weekend’s contest against D.C. United in the capital.

OUTLOOK: The Montreal Impact remain in the fifth playoff spot in the East, but might not remain there for long with results like they’ve obtained recently. Their last win dates back to August 6 and a 3-1 defeat against the New England Revolution sees them dipping dangerously close to the playoff line. They’ll need to right the ship quickly, but a visit to Red Bull Arena against the New York Red Bulls presents a difficult task.

OUTLOOK: Despite positive recent results, the Vancouver Whitecaps dipped to losing form again against the Seattle Sounders, falling 1-0 to the hosts. The loss places them below the Sounders in the standings and in a difficult position, six points out of the playoffs. Fortunately for them, they welcome a Colorado Rapids team this weekend that has been less than impressive of late.

OUTLOOK: Though a draw against the Chicago Fire is less impressive than one against the New York Red Bulls, it leaves D.C. United in control of its destiny. Approaching the playoffs,they sit only two points behind the sixth-place New England Revolution with a match in hand. They’ll face another primary playoff rival this weekend, as they welcome Orlando City to the capital, who currently sit even on points and matches.

OUTLOOK: While currently in ninth place, the San Jose Earthquakes are far from eliminated. With two matches in hand over the Vancouver Whitecaps and Sporting Kansas City, only the Seattle Sounders remain fully above them in the table. They’ll need to fully utilize those two matches in hand after a boring 0-0 draw against the Colorado Rapids, and they’ll have the opportunity as the aforementioned Sporting KC are their opponents this weekend.

OUTLOOK: The Houston Dynamo’s strong victory over Real Salt Lake in Utah showed flashes of a team rarely seen this season. They remain far from playoff contention, but could secure a second consecutive victory against the Portland Timbers this weekend at home, as the Timbers have yet to win on the road this year.

THIS WEEK: vs. New England Revolution on Sunday.

OUTLOOK: Who was the team that showed up on Saturday? The Columbus Crew dominated proceedings in Florida to rout Orlando City by a final scoreline of 4-1 on Saturday. Ola Kamara led the way with a brace as the visitors secured three road points as the Crew refuse to fade from playoff hopes. They’ll have a major opportunity to gain crucial points this weekend when they welcome the New England Revolution.

THIS WEEK: at New York City FC on Friday.

OUTLOOK: The Chicago Fire seemed moments away from three vital points on Friday against D.C. United, but a stoppage time goal from Bobby Boswell left the hosts wanting as they settled for a single point at home. The Fire remain dead last in the East and face a top three team this weekend when they travel east to face New York City FC.