Who should the USMNT start vs. Saint Vincent and the Grenadines? 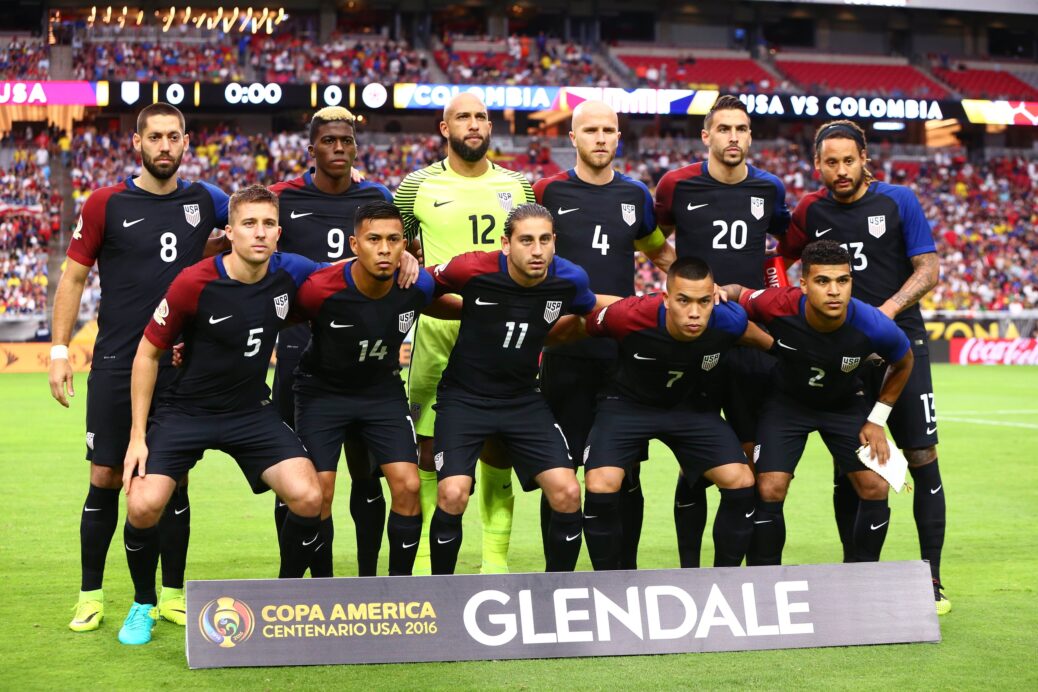 Just two games stand between the U.S. Men’s National Team and the next round of World Cup qualifying, and the process of getting there begins Friday with what could be a bit of a trap game.

St. Vincent & The Grenadines are far and away the least dangerous opponent in Group C play, but the USMNT cannot take Friday’s task lightly. Playing in a cricket stadium in humid conditions, the U.S. will face adversity in Kingston, especially if the team fails to get off to a hot start. An early goal in the teams’ last meeting put the U.S. on their heels early, even if the favorites did rebound en route to a resounding win.

Throughout the week, the U.S. has stressed the importance of scoring fast and often in what is essentially a must-win match. Two victories would seal a spot in the Hexagonal, while anything less opens the door for a shock exit from World Cup qualifying. Don’t expect Jurgen Klinsmann and co. to take many risks on Friday as the U.S. looks to simply take care of business against an overmatched opponent.

Here’s a look at one possible lineup Klinsmann could opt for against St. Vincent & The Grenadines: 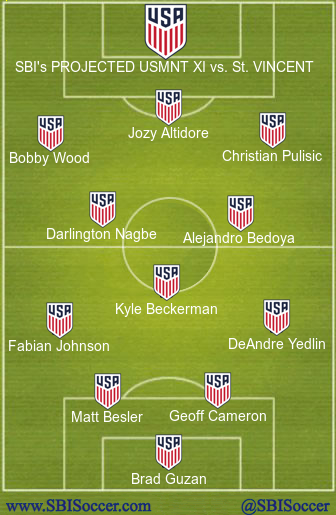 Here are some thoughts on the lineup:

When assessing the current USMNT roster, the back five appears the most set in stone. After months of debate, Brad Guzan took a firm grasp of the No. 1 goalkeeper position, showing well for himself through the Copa America. It wasn’t a perfect tournament, but a very solid one, and it paid off as Guzan earned a move to Middlesbrough. The positional battle is not over, for club or for country, but Guzan should be the man in net for these upcoming matches, even if Tim Howard has performed well since moving to MLS.

In front of him, the U.S. will need to adapt without John Brooks, who might have been the team’s best player this past summer. DeAndre Yedlin should slot right in at one fullback position, while Geoff Cameron remains a favorite to reclaim his spot in central defense. Alongside him, Klinsmann can opt for either Omar Gonzalez or Matt Besler. The latter’s presence on the Copa America roster helps his familiarity with Cameron, as well as his case for a start.

At left back, Fabian Johnson appears to be Klinsmann’s go-to yet again, as the Borussia Monchengladbach regular was once again listed as a defender. Johnson will certainly be on the pitch Friday at either left back or left wing. Should he be pushed up higher, he could be replaced by Kellyn Acosta or even Besler at left back following the Sporting KC’s standout performance at the position in this past summer’s quarterfinal against Ecuador.

The midfield is a bit trickier, especially given the suspension of Michael Bradley. The Toronto FC midfielder cemented his role as the team’s No. 6 this summer, and his absence leaves a big hole in the central midfield. With Bradley gone, Klinsmann has several options. He can rely on some combination of Alejandro Bedoya, Sacha Kljestan, Darlington Nagbe and Graham Zusi to man the midfield in a 4-4-2 or super-attacking 4-3-3. Or he could include Kyle Beckerman to hold down the fort, even against an underdog St. Vincent & the Grenadines side. Players like Perry Kitchen and Danny Williams are options one would expect to slide in, but their absence should open the door for Beckerman to earn some minutes on Friday.

Beckerman’s inclusion may not be a sexy one, especially against such a low-ranked opponent, but it does open several doors. With the Real Salt Lake veteran tucked inside his own half, Yedlin and Johnson have more freedom to fly forward as Beckerman forms a sort of back three with the two centerbacks. The USMNT should expect a bulk of possession on Friday, and Beckerman’s presence may take away a midfield option, but does add to the numbers given freedom to venture forward.

That leaves Klinsmann with the decision of who to pair with him. Given the fact that he wasn’t on the original roster, Kljestan seems unlikely to be in the starting XI but could certainly join the fray as a substitute. Zusi could see time on the wing or in the midfield, and his versatility may be better served off the bench as the game wears on. That leaves Bedoya and Nagbe. Bedoya has taken to a No. 8 role during his time with the Philadelphia Union and should fit perfectly in the central midfield. Meanwhile, Nagbe could be in line for his first USMNT start, a deserved one given his performance leading up to the Copa.

Finally, there’s the attacking third of the field. Jozy Altidore is all but solidified as a starter after being named captain, but the pieces put around him remain up for debate. Friday could be a good time to work on Altidore’s partnership with Bobby Wood in a two-striker set, but the Hamburg forward demonstrated that he can be effective from a wide role over the summer. It all remains very fluid, though, as Wood will almost certainly take every opportunity to cut inside and create.

With the absence of Gyasi Zardes, the USMNT has a lack of battle-tested wing options. Zusi could slot in out wide if called upon, but the lack of Zardes leaves the USMNT without one of the pool’s most dynamic and athletic attackers. However, going with a 4-3-3 gives Klinsmann the ability to throw another playmaker in the attack, like Christian Pulisic or Jordan Morris, giving one of the two valuable experience in a game that does provide plenty of pressure.

Overall, expect Klinsmann to stick with the familiar, at least for Friday. With a spot in the Hex on the line, the U.S. can’t take the match for granted, making it necessary to rely on a group of players that helped them throughout the summer.