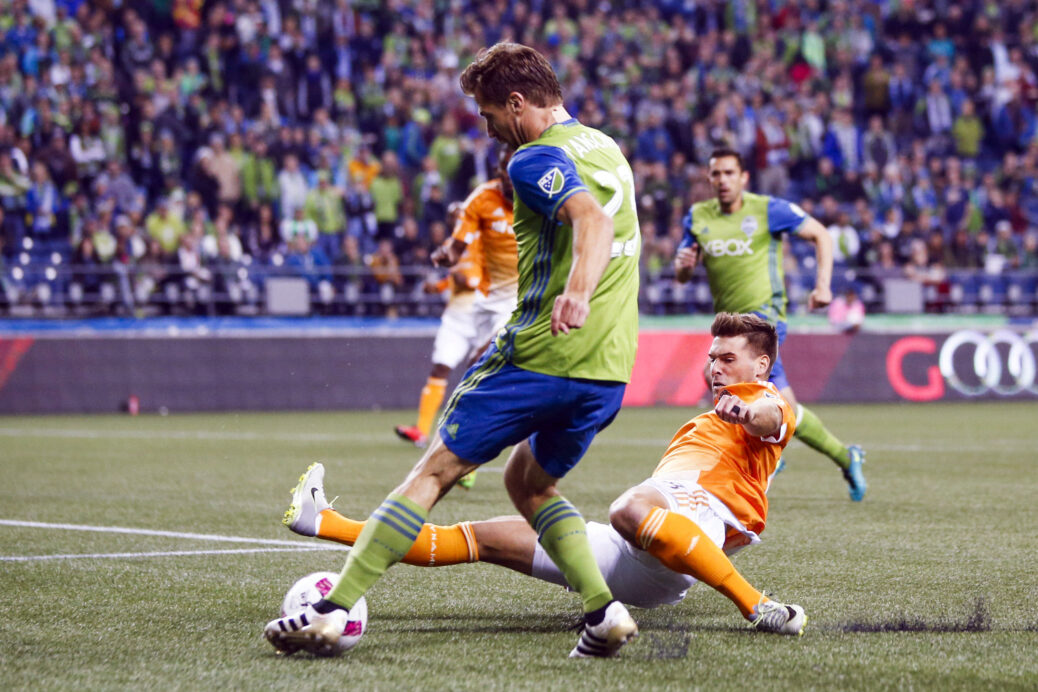 SEATTLE– The Seattle Sounders needed three points against the lowly Houston Dynamo to qualify for the playoffs for the eighth time in eight seasons.

They will have to wait.

Seattle controlled much of Wednesday night’s match against the Dynamo, owners of the worst record in the Western Conference. But time and again the Sounders failed to make the last pass or found themselves denied by goalkeeper Joe Willis, leaving the sides to settle for a scoreless draw in front of 39,772 at CenturyLink Field.

Referee Drew Fischer issued Osvaldo Alonso a straight red card in the 65th minute for putting a hand to Will Bruin’s face. Despite being down a man, the Sounders controlled the rest of the game and saw the best chance down the stretch: Late substitute Oalex Anderson earned himself a clean look from close range, but sent a shot directly to a waiting Willis. Nelson Valdez and Jordan Morris were also both open in the penalty area.

The point the Sounders earned from the draw still moves them into a tie with Real Salt Lake for the fourth seed in the conference. By virtue of tiebreaker (most wins), the Sounders technically hold the fourth seed. They now sit two points above the red line with two matches to play in the season.

The Dynamo (7-13-12, 35 points) were eliminated from the playoffs after Saturday’s loss to the Colorado Rapids. They nonetheless put up a spirited effort on Wednesday, ending a two-game losing streak, earning just their second result ever at CenturyLink Field (they’re now at 0-5-2 all-time in Seattle), and perhaps adding strength to interim head coach Wade Barrett’s claim to a permanent job.

An initially sleepy first half opened up around the half-hour mark. The Sounders controlled possession from the start, seeing 70 percent of the ball over the first 20 minutes. Andreas Ivanschitz earned a couple of early looks but couldn’t seriously challenge Willis. Cristian Roldan tracked down a Nicolas Lodeiro chip into the box in the 24th minute, but couldn’t cleanly gather before Willis scooped up the loose ball.

The Dynamo almost opened the scoring against the run of play in the 30th minute. Bruin, finding himself unmarked as he gathered a pass from Andrew Wenger at the top of the penalty area, laced a right-footed shot that grazed goalkeeper Stefan Frei’s fingertips before slapping the post.

Only tremendous work from Willis kept the Sounders off the board in the 40th minute. Willis first charged and dropped to his knees to deny Erik Friberg, who had deftly split a pair of defenders at the top of the penalty area to get behind the back line. The goalkeeper then recovered to slap away the ball before Friberg could tap in the deflection.

Both teams had opportunities off corner kicks early in the second half. The Dynamo almost found the back of the net in the 48th minute, but Keyner Brown’s header caromed off the upper left corner of the frame. Just after the hour-mark Roman Torres missed a golden opportunity to put the Sounders up 1-0, sending a clean header just past the right post.

Looking forward, both teams are back in action on Sunday. The Dynamo host the LA Galaxy (11-6-15, 48 points) at BBVA Compass Stadium, while the Sounders visit league-leading FC Dallas (16-8-8, 56 points).

David Horst is the kind of defender Jordan Morris terrorizes with his speed. But Horst battled all night to limit Morris, forcing him to the left time and again.

Osvaldo Alonso’s red card. A silly mistake from a veteran who has elevated his play since becoming captain in Brad Evans’ absence. The table was set for the Sounders to make a push for a game-winning goal, but the red card forced them to scramble for the final 25 minutes.

Jordan Morris seemed at a loss when Houston’s central defense consistently channeled him to the left. He also failed to see open crosses on multiple occasions in the first half.