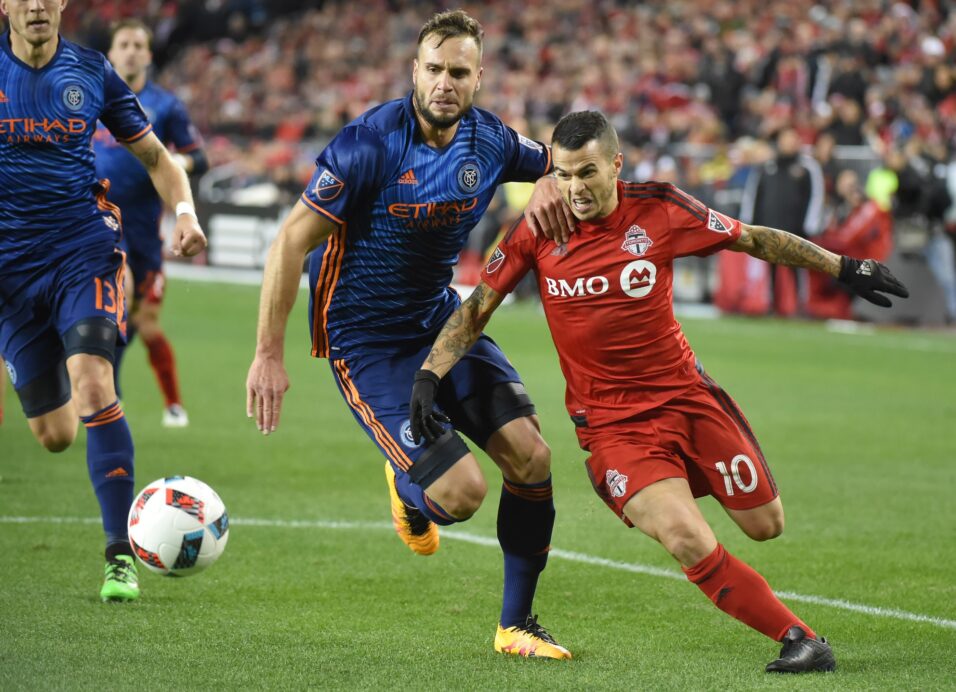 After knocking on New York City FC’s door all night, Toronto FC finally broke through with a pair of late goals to earn a 2-0 win in the first leg of the Eastern Conference semifinals.

Scores from Jozy Altidore and Tosaint Ricketts in the 84th and 92nd minute, respectively, served as catharses for the fans at BMO Field on Sunday. The home side applied heavy offensive pressure all match against the No. 2 seed in the East, who was taking part in its first playoff match in franchise history.

Altidore tallied the third playoff goal of his career when he rocketed a loose ball in the box into the net over the head of NYCFC left back Ronald Matarrita. Ricketts, who entered the match as a substitute moments before that goal, sealed the contest when he tapped in his own rebound after getting on the end of a cross.

In what was a physical, intense and fast-paced contest throughout, a total of 31 fouls were called by referee Silviu Petrescu, with six yellow cards handed out and five of them going to NYCFC players.

This was also the first victory for Toronto over NYCFC in six overall meetings. The two sides will meet at Yankee Stadium next Sunday in the second-leg fixture.

Though the reigning MLS MVP couldn’t find a goal himself on the evening, Sebastian Giovinco applied intense work rate in the attacking third to help Toronto FC generate chance after chance before his teammates finally broke the scoreless deadlock.

BMO Field erupted after Jozy Altidore’s goal as frustration had been building up all evening from the physical battles between the two sides and missed chances for the home team.

With NYCFC absorbing pressure all night, the only chances for the away side to threaten came on counter-attacks. Steven Mendoza, however, was unable to generate many opportunities for his side to snatch an away goal.