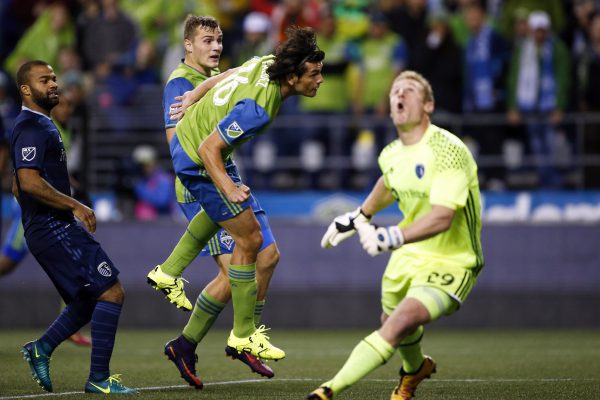 It took, in the end, a goal from a much-maligned million-dollar forward, a designated player who had not scored in a calendar year. It took all that and more, but the Seattle Sounders are advancing to the conference semifinals for the eighth time in the club’s eight year history.

Nelson Valdez, who had not scored since the 2015 playoffs, entered late in the match and got on the end of a Joevin Jones cross, powering a header past goalkeeper Tim Melia and sending the 36,151 at CenturyLink Field into delirium. The goal also sent Sporting KC into a fury because Valdez, replays confirmed, was clearly a half-step offside.

Missed call or not, Seattle now hosts top-seeded FC Dallas on Sunday in the first match of the two-legged semifinal. For the second time in two years, Kansas City finds itself eliminated in the knockout round, both times on the road in the Pacific Northwest.

While the Sounders will advance, the outcome was anything but a given and would certainly have been different if Frei hadn’t delivered a sterling performance, or if Matt Besler hadn’t been inches offside on what initially looked like the game’s opening goal.

Besler’s header off a Benny Feilhaber free kick appeared to open the scoring in the 52nd minute, but referee Ismail Elfath ruled the defender offside, a decision that replays appeared to support as a good, if close, call.

After repeatedly coming up big early in the game, Frei delivered two more key saves in the second half. In the 62nd minute he leaped to push a Seth Sinovic shot from distance over the crossbar. Sinovic initially corralled a loose corner before unleashing from the top of the penalty area. In the 80th minute, Feilhaber — a man on fire fueled by boos and a yellow card for dissent — weaved through a series of defenders to earn himself a clean look, but Frei delivered another stellar save.

The match was physical, foul-filled, and contentious throughout. Roger Espinoza and Osvaldo Alonso exchanged bruising tackles in the first half, with Alonso picking up a yellow for his part in the affair. Alonso also nearly picked up a second yellow for a living-on-the-edge tackle on Feilhaber midway through the second half. For his part, Feilhaber was twice given final warnings for persistent infringement before finally earning the card for dissent.

Seattle had the home field advantage, but it was Sporting KC that came out strong and controlled the first half. A team known for bunkering and bullying on the road had the unusually sloppy Sounders on their heels and seemed all but sure to find a first-half lead.

Paulo Nagamura nearly opened the scoring from the top of the penalty area in just the eighth minute, capitalizing on a Roman Torres turnover to force Frei into a diving save. The Brazilian midfielder nearly scored again moments later, latching onto a Feilhaber through ball into the heart of the area only to be denied by Frei once again. Graham Zusi gathered the rebound and slapped a 12-yard shot off the far post.

A pair of Sounders’ corner kicks at the 20th minute slowed down the match, as Nicolas Lodeiro began to impose his will on the action. Seattle’s first chance came on a 25th-minute Lodeiro corner kick, but Chad Marshall’s header deflected off Dom Dwyer for a goal kick. Play evened out over the final 20 minutes of the half, though Frei delivered another quality save in the 32nd minute, this time off a redirected Feilhaber free kick.

Tough not reward Nelson Valdez for the dramatic game-winning goal, but the Sounders would have been in no position to win if not for a performance from Stefan Frei that will be long remembered in Seattle.

What else? A Nelson Valdez goal that was equal parts salvation, celebration, and validation. It will also be a moment Sporting KC and Peter Vermes have nightmares about because of a blown offside call.

The officiating crew, led by referee Ismail Elfath, won’t win any awards for their showing on Thursday night.