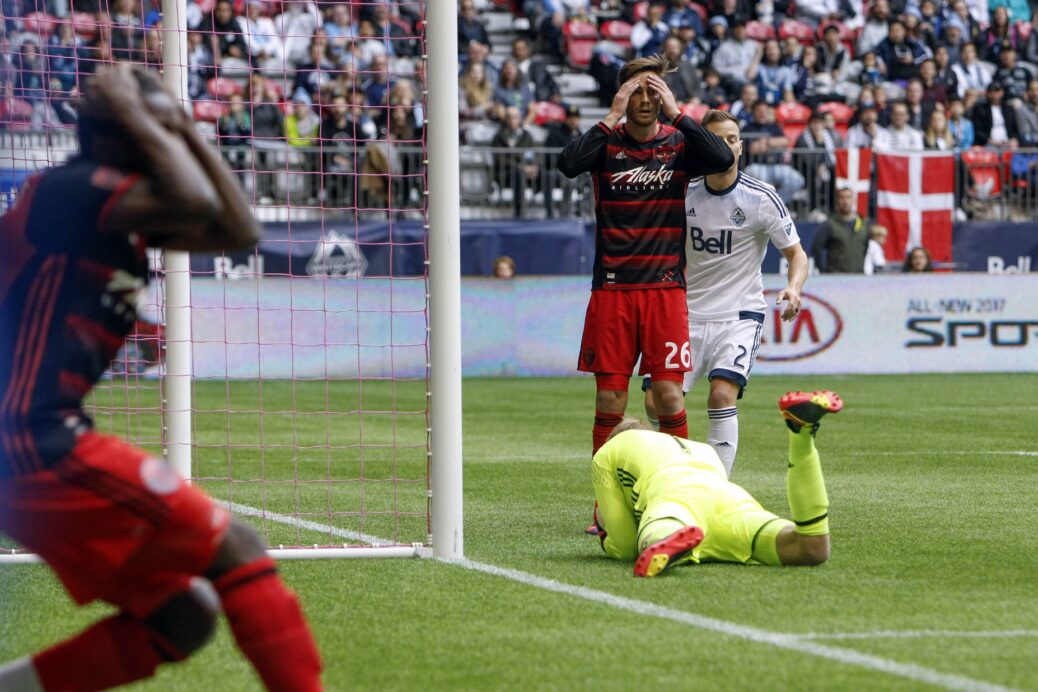 The Western Conference playoff field is set, and it won’t include last season’s champions.

In need of a win to stay alive in the playoff race, the Portland Timbers were eliminated in blowout fashion as the reigning champions fell, 4-1, to the Vancouver Whitecaps. Meanwhile, atop the table, FC Dallas did just enough to edge out the Colorado Rapids to claim the club’s first Supporters’ Shield crown.

MLS will have a new champion, as last year’s winners were officially knocked out of postseason contention with a loss to a local rival.

A Giles Barnes brace wasn’t enough to save a disappointing Vancouver Whitecaps season, but it was more than enough to help the Cascadia club eliminate the Portland Timbers with a 4-1 win on Sunday.

Barnes began to terrorize the Timbers defense with a goal in the 13th minute for his first score since joining the Whitecaps. On the end of a Pedro Morales cross, Barnes smashed a first-time shot from the center of the box, leaving Jake Gleason no chance as the Whitecaps took an early lead.

The Timbers nearly got back into the match on a Lucas Melano shot that clanked off the post before Barnes added another in the 32nd minute. After winning the ball, Barnes wiggled through the defense before curling a shot to the far post, all but ending the Timbers’ playoff hopes.

In the second half, the Timbers simply collapsed. Morales began the scoring with a goal of his own in the 54th minute before Nicolas Mezquida added the Whitecaps fourth just one minute later. Diego Valeri pulled back a goal on a late penalty kick, but the loss dooms the Timbers to elimination, as the reigning champions finish seventh in the Western Conference.

Giles Barnes was spectacular throughout the opening half as he terrorized the Timbers backline with two goals.

Barnes‘ first goal got the Whitecaps off to an ideal start, but his second all but ended the Timbers’ playoff hopes.

It was a week to forget for the Timbers, who also suffered elimination in the CONCACAF Champions League on Wednesday. The reigning MLS Cup champions put all of their eggs in the MLS playoff basket and fell well short.

It wasn’t pretty, but it was enough for FC Dallas.

Having already claimed the U.S. Open Cup, FC Dallas won the club’s second trophy of the season on Sunday by claiming the Supporters’ Shield via a 0-0 draw with the LA Galaxy. The win sees FC Dallas earn home-field advantage throughout the playoffs, while the Galaxy were locked into the third seed entering Sunday’s match.

With their position already set, the Galaxy opted to rest several regulars, including Giovani dos Santos and Robbie Keane. Their absences were apparent, as FC Dallas created a bulk of the chances while outshooting the opposition by a wide margin.

Playing without Mauro Diaz due to the midfielder’s season-ending injury, FC Dallas lacked the ability to create that one decisive goal. However, a clean sheet on the other end was enough to keep the club’s hopes of a historic treble alive.

Atiba Harris had a golden chance in the first half, but his shot from inside the six-yard box smashed the post in what was the best scoring chance of the match.

In terms of quality, Sunday’s clash was a match to forget for all involved, but it won’t matter to FC Dallas as they claimed their second trophy.

The Seattle Sounders’ unlikely postseason push was completed on Sunday.

After a chaotic spring and summer that saw the firing of longtime manager Sigi Schmid, the Sounders sealed a postseason berth on Sunday afternoon with a 2-1 win over Real Salt Lake. Even in defeat, RSL will join the Sounders in the playoffs as the sixth seed.

The first five minutes proved electric, as each side fired a goal early. Alvaro Morris started the scoring just three minutes in on an assist from Jordan Morris. However, just one minute later, RSL was right back in the match on a Luke Mulholland goal.

Both sides settled into the match from there before Cristian Roldan restored the Sounders advantage with a 31st-minute goal.

Morris continued to terrorize the Sounders defense throughout the second half, but couldn’t quite slip an insurance goal past Nick Rimando. It would prove no matter, as the Sounders held on to lock up a home match for the postseason’s opening round.

Jordan Morris may not have gotten on the scoresheet himself, but the rookie forward was the most active attacker after assisting the opening goal.

In need of a winner following a tying goal, Cristian Roldan stepped up and earned his team a victory and the home playoff match that came with it.

As the game wore on, Kyle Beckerman became more and more frustrated, and he was lucky not to be sent off for several late offenses.

A penalty kick from Benny Feilhaber put Sporting up early in a 2-0 win at Children’s Mercy Park, while a tally from Graham Zusi in the 88th minute locked up the result. The win puts Sporting KC in fifth and sets up a match against the Seattle Sounders at CenturyLink Field.

Sporting controlled the match for almost the entire time, but also found few chances to score. The penalty kick looked to be the only goal to separate the teams before Sporting found a break late in the match and Zusi notched the second goal.

Sporting KC held the Earthquakes to few clear-cut chances. A header late in the match sailed off Chris Wondolowski’s head as the Earthquakes best chance of the game came and went.

Benny Feilhaber was Sporting KC’s engine. Feilhaber confidently buried the penalty kick and pulled the strings for Sporting all afternoon.

The win was sealed for Sporting KC when Graham Zusi made the most of a mismatch on an attacking break and scored a vital goal.

The Earthquakes had limited chances to score in the match, but Chris Wondolowski found himself in on goal a couple times and was unable to score.

The Colorado Rapids needed a result and help to win the Supporters’ Shield. They fell just short.

An equalizing goal from Shkelzen Gashi gave the Rapids a chance, but an early goal from Andrew Wenger was too much for the Rapids to overcome in a 1-1 draw with the Dynamo. The result sees the Rapids finish just two points out of first place.

The Dynamo have played spoiler for weeks, and their latest result began in the 20th minute. After seeing a Mauro Manotas shot parried by Tim Howard, Wenger was left with a simple tap-in to an open net to give the Dynamo a 1-0 lead.

Gashi gave the Rapids a lifeline in the 67th minute. The Albanian was fed by Marlon Hairston, whose assist was his team-leading sixth of the season. Jermaine Jones was inserted the game moments later, as the Rapids pushed for a final goal that would seal a Supporters’ Shield. It never came, as the Rapids finished second in the West.

Shkelzen Gashi scored the goal the Rapids needed, but it just wasn’t enough to lead them to the playoffs.

Andrew Wenger’s goal was a hole too big for the Rapids, who couldn’t quite battle into the lead in a must-win match.

Dominique Badji did not make the most of Sunday’s chances, as he fired four of his five shots off target.