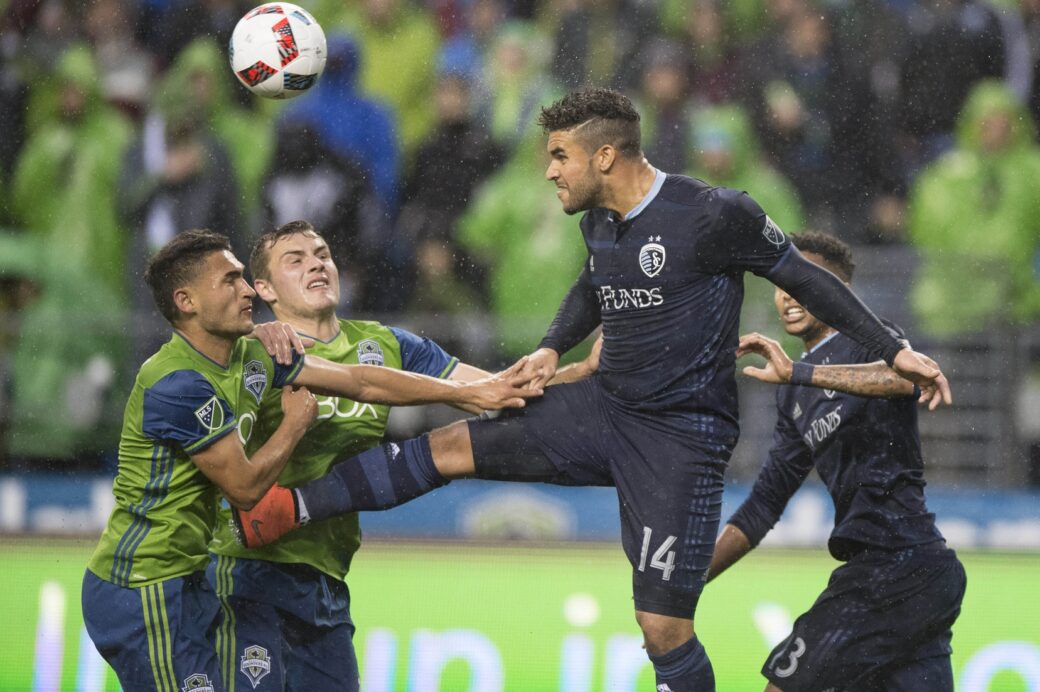 The final berth in the semifinal round of the MLS Cup playoffs will be handed out on Thursday night at CenturyLink Field as the Seattle Sounders host Sporting Kansas City.

The Sounders earned a match at home, something no one thought would happen when Sigi Schmid was fired earlier this season with the Sounders well out of the playoff race. Brian Schmetzer stepped in on an interim basis and, with Nicolas Lodeiro leading the charge, the Sounders pushed back into the postseason.

Sporting Kansas City, meanwhile, secured the fifth seed in the Western Conference with a victory over San Jose on the final day of the regular season. Featuring a veteran core, Sporting KC has proven a perennial contender thanks to experienced leadership all over the field.

Here’s a closer look at the Western Conference clash.

SEASON SERIES–Sporting KC won both games between the two sides in the regular season. The second win on July 24 triggered the firing of Schmid a few days later. The sides haven’t met since Seattle started its late-season surge.

PLAYERS TO WATCH: SEATTLE- Nicolas Lodeiro has been an impact player since the day he entered MLS. He’s provided Jordan Morris with plenty of support in the final third since Clint Dempsey was ruled out for the season, and he can pick a defense apart with a single pass. SPORTING KC- Dom Dwyer enters the postseason with four goals in his last six matches. Benny Feilhaber has a goal and six assists in the same span.

MATCHUP TO WATCH: Osvaldo Alonso vs. Benny Feilhaber. Seattle’s midfield workhorse Osvaldo Alonso will be tasked with breaking up Feilhaber’s influence on the match and starting attacks himself when he’s on the ball. When Alonso is at his best, he’s Seattle’s best weapon. If Feilhaber can find some cracks in Alonso’s armor and create a few early chances, Sporting KC will be able to gain some much-needed traction on the road.

X-FACTORS: SEATTLE– Second-year man Cristian Roldan should be able to work his way into space in midfield with Sporting KC honed in on stopping the influence of Lodeiro and Alonso. Roldan will also be called upon as an back-up option to defending Feilhaber and Dwyer to an extent. SPORTING KC- Goalkeeper Tim Melia has quietly put together a respectable season for Peter Vermes’ side. The former Chivas USA man is expected to be tested on a few occasions by the Seattle attack. If he keeps the match scoreless heading into halftime, the visitors stand a real chance of winning.

It’s hard to pick against the Sounders in this match due to a variety of reasons.

Seattle is in incredible form under interim boss Brian Schmetzer. The team is 10-5-2 at home and host sides in the knockout round are 12-2-0 all time.

It’ll all come down to defending for the Sounders. Lodeiro and Morris are expected to create plenty of chances, but the back line anchored by Chad Marshall can’t show any weaknesses against the physicality of Dwyer and cunning passing ability of Feilhaber.

Sporting KC left Cascadia heartbroken a year ago at the same stage of the postseason. The experience from last season’s shootout loss to the Portland Timbers will help the club in raucous atmosphere at CenturyLink Field.

Despite the optimism, Sporting KC comes into the postseason with the worst road record of the six Western Conference teams. Only D.C. United has a worse mark of the 12 teams that qualified for the playoffs.

All signs are pointing to a Seattle victory, but advancing to the next round will be harder than expected with Sporting KC hungry to return to postseason glory.