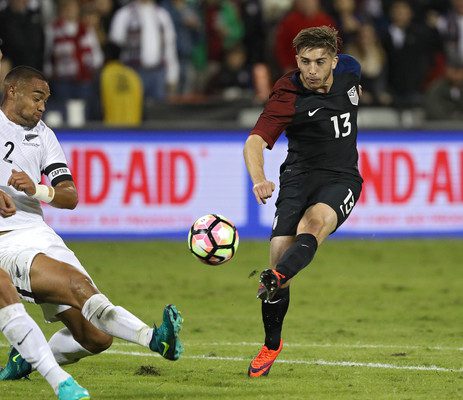 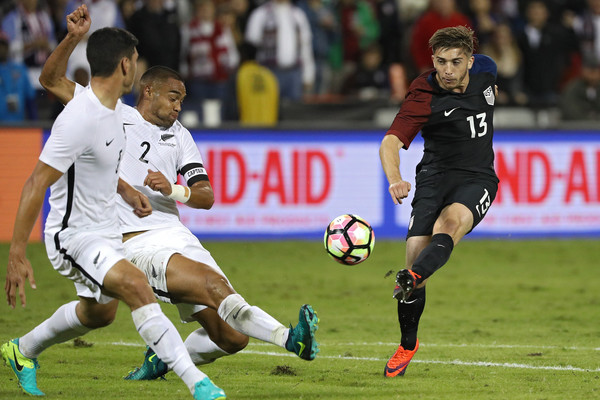 Once again, the U.S. Men’s National Team looked far from their best on Tuesday night and, with Mexico looming, the team faces several questions as the Hexagonal phase begins.

The U.S. sputtered to a 1-1 draw with New Zealand on Tuesday in what was another lackluster effort. Without many of the team’s key players, the U.S. rarely looked in sync. Sacha Kljestan, Julian Green and Matt Besler stood above the rest with impressive efforts, but the U.S. spent a chunk of the game on their heels against a New Zealand team that showed more motivation to attack as the game wore on.

With the Hexagonal just one month away, Jurgen Klinsmann now faces major decisions. While several newcomers shined, several familiar faces faltered, casting doubt over how the U.S. should lineup against El Tri.

Here’s a look at several takeaways from Tuesday’s match:

Tim Howard and Brad Guzan remain in a competition for the starting goalkeeping gig. This camp wasn’t about that. Klinsmann’s aim was to push one of his three young goalkeepers towards making that next step. One certainly did, making the goalkeeping picture a bit clearer.

Ethan Horvath was far and away the most impressive of the three goalkeepers called into camp. Against Cuba, the Molde starter generally looked confident and collected in maintaining a clean sheet. Was it against elite competition? No. However, the 21-year-old goalkeeper showed more than enough to justify further involvement.

William Yarbrough and David Bingham weren’t as good. The former, who earned the start on Tuesday, had some nervy early moments, even if one should have been called a foul. The latter let a goal slip through his legs, although he was screened, depriving the U.S. of the win. Neither looked like a goalkeeper ready to challenge Howard or Guzan, and neither looked like they were fully trustworthy enough to take the next step.

Yarbrough and Bingham will certainly get more chances as time goes on but, for now, Horvath looks to be the choice to join Howard and Guzan as the Hex begins.

Lynden Gooch had to sit patiently for more than a game-and-a-half, but his USMNT debut was worth the wait.

Gooch played 31 minutes in Tuesday’s friendly, and nearly made an immediate impact on a cross in from the right side. His crossing ability and work ethic served as two highlights for the 20-year-old midfielder, who showed well in his limited chances to get on the ball.

Overall, it was a positive first performance. There were no debut jitters or rookie mistakes. Gooch was consistent and composed, two characteristics that bode well for his future. His Premier League appearances no doubt helped with the acclimation process to the ever-changing international game.

It’s too soon to tell if Gooch will be a factor as the Hex begins. Several other wingers likely remain ahead of him, although standout performances over the next month with Sunderland could certainly go a long way. Still, Gooch showed why many believe he has a bright future in a successful USMNT debut.

The pair of friendlies provided a chance for several players to impress, but none did so more than Julian Green.

Two years have passed since Green’s famous goal against Belgium, and the 21-year-old winger spent a majority of that time far away from the picture for both club and country. After shining with Bayern Munich throughout the preseason, Green was somewhat of a surprise addition to the latest USMNT roster, but he more than justified Klinsmann’s faith.

After scoring and creating a goal against Cuba, Green was once again the USMNT’s most creative attacker on Tuesday night. His goal proved to be an impressive finish, even if the goalkeeping was poor to say the least. Green looked like an entirely new player, one that once again has the confidence to run at and beat his defender. His shooting also seems much improved. He’s clearly getting better.

Just how high Green’s stock has risen remains to be seen, but it is quite certain that Green has played himself into the conversation for a spot heading into the Hexagonal.

RIGHT BACK A CONCERN HEADING INTO HEX

DeAndre Yedlin all but cemented himself as first choice right back during this summer’s Copa America. However, his spot is much less certain following several up-and-down performances.

Yedlin was played on the wing on Tuesday night, while Michael Orozco was given the start at the right back position. Pushed up the field for the first half, Yedlin’s pace was on display, while he did get a chance at goal. However, it still wasn’t enough to instill much confidence following a series of lackluster efforts. Since the Copa America, Yedlin hasn’t quite looked in-tune, and his push up the field could be a sign that the right back position is once again up for grabs.

Klinsmann hinted as much. The USMNT boss says its simply a reality that Yedlin “struggled” throughout the last two USMNT camps. With limited playtime on the club level since his move to Newcastle, Yedlin is under Klinsmann’s microscope heading into the Hex.

Orozco, meanwhile, didn’t exactly shine either. The defender had several mistouches and several poor sequences in the attacking half throughout Tuesday’s action. He remains a valuable defensive option due to his versatility, but Orozco’s performance on Tuesday did not offer many signs that he was ready to stop or threaten a team like Mexico.

With a majority of his club minutes coming off the bench or higher up the field, Yedlin’s time with the USMNT is even more valuable. He needs to step up his efforts with the USMNT or risk losing his spot as a fixture in the starting XI.