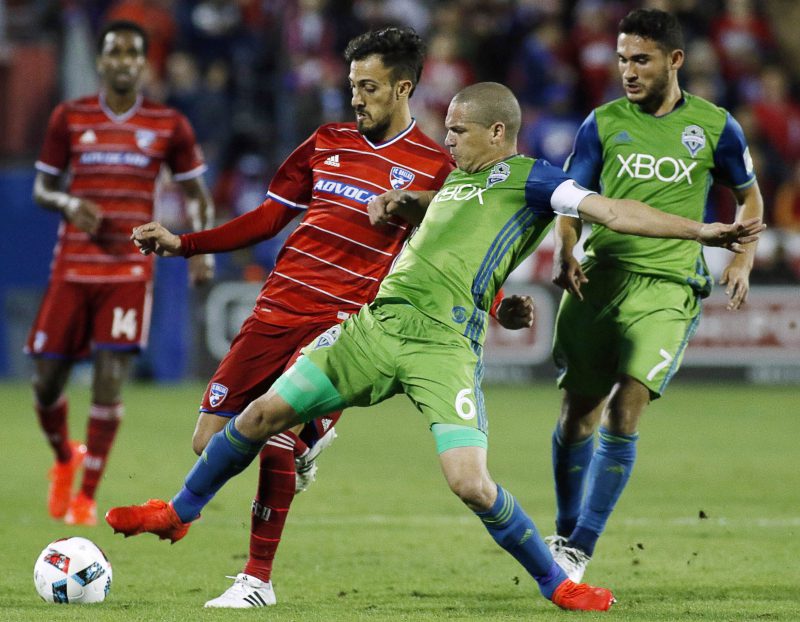 FC Dallas huffed and puffed, but the Seattle Sounders managed to progress to the Western Conference final despite a 2-1 loss in the second leg of their conference semifinal on Sunday at Toyota Stadium. The Sounders advanced 4-2 on aggregate.

Tesho Akindele scored the opening goal to send Toyota Stadium into a frenzy, but Nicolas Lodeiro’s second-half strike all but sealed the Sounders’ spot in the next round. Maxi Urruti scored shortly thereafter, but it wasn’t enough to save Dallas’ season.

The Sounders will now play the No. 2 seed Colorado Rapids in the conference final. Seattle will host the first leg on Nov. 22 before traveling to Commerce City for the return game on Nov. 27.

With a massive 3-0 deficit to overcome, Dallas began the match with plenty of energy. Atiba Harris tested goalkeeper Stefan Frei in the early stages, but the Sounders goalkeeper was alert to the danger.

Eventually, Dallas’ pressure paid off as Harris picked out a cross for Akindele, whose header bounced off the crossbar and into the goal on 25 minutes.

The rest of the first half was dominated by the Hoops as Urruti and Michael Barrios each had tremendous opportunities to pull Dallas within one, but they were both off target.

Lodeiro eventually forced Chris Seitz into action on a free kick, with the goalkeeper deflected the Uruguayan’s shot off the post in the 37th minute.

Seattle was handed an additional blow as Jordan Morris had to exit the game at halftime with a thigh injury. He was replaced by Oneil Fisher.

Dallas mustered 11 attempts to Seattle’s three in the first half alone, but the Sounders still started the second interval with impetus and took control for the opening ten minutes of the half.

The onslaught finally reaped rewards as Tyrone Mears forced Dallas defender Walker Zimmerman off the ball before finding Lodeiro for his third playoff goal in as many games.

Urruti delivered an immediate response for Dallas, as Mauro Rosales sent a header across the box for his Argentine countryman, who made no mistake from a couple yards out. However, that was as close as the Texan side came to pulling off a miraculous comeback.

The Sounders are returning to the conference final for the second time in the last three seasons and for the third time overall in their MLS history.

As for Dallas, it becomes the fifth Supporters’ Shield winner in a row to miss out on the MLS Cup final. The LA Galaxy were the last to do so in 2011, when they were crowned champions.

If it wasn’t for Stefan Frei‘s heroics in the first half, FC Dallas would have easily scored twice in the opening 25 minutes. However, Frei stood tall and made sure the Seattle Sounders went into the half with a multiple-goal lead.

Had Maxi Urruti converted Michael Barrios‘ cross right around the half-hour mark, Dallas would’ve had a 2-0 lead in the second leg and all of the momentum. Unfortunately for the hosts, Urruti was just behind the incoming ball and slid past it.

One costly mistake from Walker Zimmerman essentially killed Dallas’ chances after Tyrone Mears closed him down before providing the assist for Nicolas Lodeiro’s decisive goal.