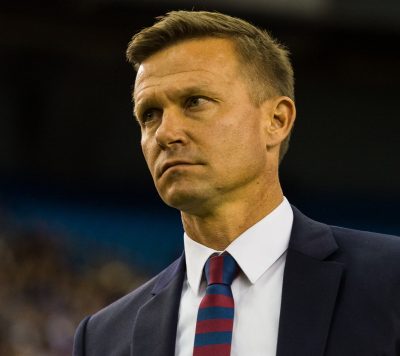 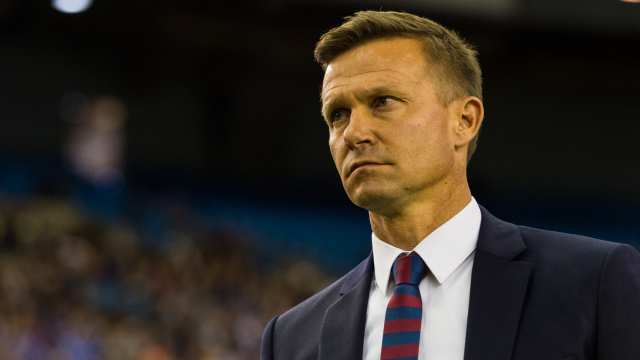 In a shocking twist to the offseason, the New York Red Bulls are reportedly set for a shakeup on the sidelines, with Jesse Marsch potentially making a move to Europe.

Marsch is reportedly in discussions with Red Bulls’ sister club, Austrian side Red Bull Salzburg to become the club’s new manager, with Goal USA reporting that Marsch is finalizing a move. Current Red Bull Salzburg manager Oscar Garcia Junyent is a leading candidate for several managerial positions and is expected to leave.

The job would be Armas’ first professional coaching job. The former Chicago Fire midfielder was previously an assistant with his old club in 2008 before taking over as head coach of the Adelphi University women’s team from 2011-15. He was named part of Marsch’s staff in 2015.

Under Marsch’s direction, the Red Bulls have enjoyed some of the most successful seasons in the team’s history, finishing first in the Eastern Conference in both 2015 and 2016, winning the Supporters’ Shield in his first year in charge. The Red Bulls have continued their post-season struggles with Marsch in charge, exiting in the Conference Finals in 2015 and the Conference Semifinals in 2016, but have otherwise been largely impressive during his tenure. The team is currently in the 2016-2017 CONCACAF Champions League Quarterfinals, where they will face fellow MLS’ side the Vancouver Whitecaps on February 22nd and March 1st.

The team has a history of turnover at the head coach position, with no manager lasting three years or more in the Red Bulls two decades of existence. Bob Bradley is the longest serving coach in team history, having been in charge just under three years from October 21st, 2002 to October 4th, 2005.

Meanwhile, Red Bull Salzburg have similarly thrived in the Austrian Bundesliga since Red Bull took over as owners in mid-2005, winning seven league titles in the last decade in addition to four Austrian Cup titles, including a league/cup double each of the past three seasons. The team has also advanced to European competition every season since the Red Bull takeover, including the UEFA Champions League each of the past four seasons. Their best finish in that time span has been a round of 16 appearance in the UEFA Europa League.