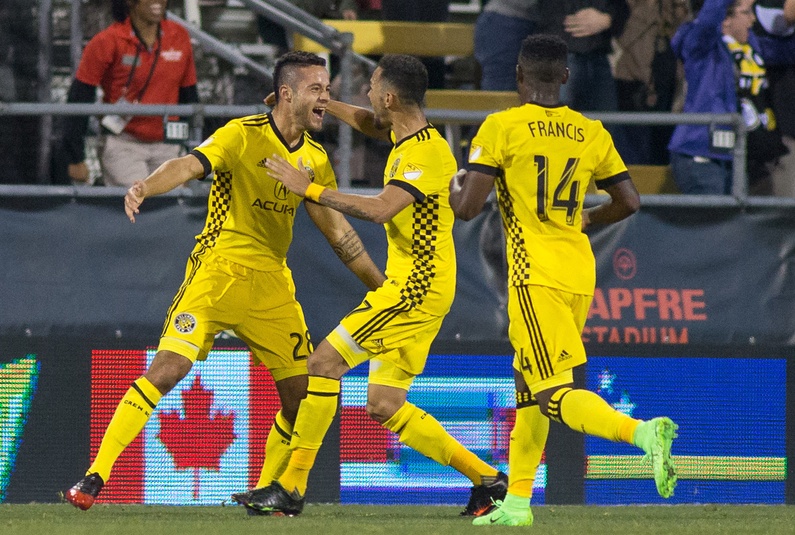 The Columbus Crew earned their second consecutive league victory after a dramatic 3-2 home win over the visiting Portland Timbers on Saturday.

Gregg Berhalter’s side received an 84th-minute game-winner from Niko Hansen to earn all three points at Mapfre Stadium.

However, the Timbers kicked off the scoring in the fourth-minute as Dairon Asprilla’s right-footed finish found the bottom-left corner for a 1-0 lead.

The Crew bounced back superbly as Justin Meram equalized from close-range in the 11th-minute before Ola Kamara put the hosts ahead eight minutes later. The Norwegian finished off Federico Higuain’s through-ball assist to the bottom-right corner for his third goal of the season.

Diego Valeri came close to leveling things for the Timbers at the half-hour mark but saw his right-footed effort strike the left-post.

Higuain’s 41st-minute long-range effort forced a save from Jake Gleeson, before Portland answered just before halftime. Fernando Adi’s fourth goal of the season leveled the score at 2-2 in first-half stoppage-time.

However, it was the Crew who made the most of their chances as substitute Hansen put his side ahead for good in the 84th-minute. It was the 22 year old’s first goal of the season, as his right-footed effort beat Gleeson to the middle of the goal.

The Crew dominated most of the match, forcing four saves out of Gleeson. Steffen made three saves in the win.

Back-to-back wins for the Crew see them  seal their seventh point of the season. They next host Orlando City on April 1 at Mapfre Stadium. The Timbers (3-0-1) will look to bounce back, as they host the New England Revolution at Providence Park on April 2nd.

Niko Hansen deserves honors after scoring the game-winner for the Crew at home. It looked as if the Crew would have to deal with the draw, but the 22-year-old made an immediate impact for Berhalter’s side. Going forward, Hansen will look to force himself into a starting role.

Moments before Hansen netted what went on to be the game-winner, the Crew forced several chances on-goal to build a bit of momentum heading into the home strethc. Kamara missed an 81st-minute header minutes before Hansen scored. Higuain and Kamara saw 83rd-minute chances saved before the substitute sealed the three points.

Wing-back Zarek Valentin had a poor showing defensively and was beaten several times by the Crew’s trio of attackers. The 25-year-old defender was later subbed off in the final moments as the Timbers looked for a late equalizer.