Despite series of late goals, Quakes not embracing ‘Goonies’ comparison just yet 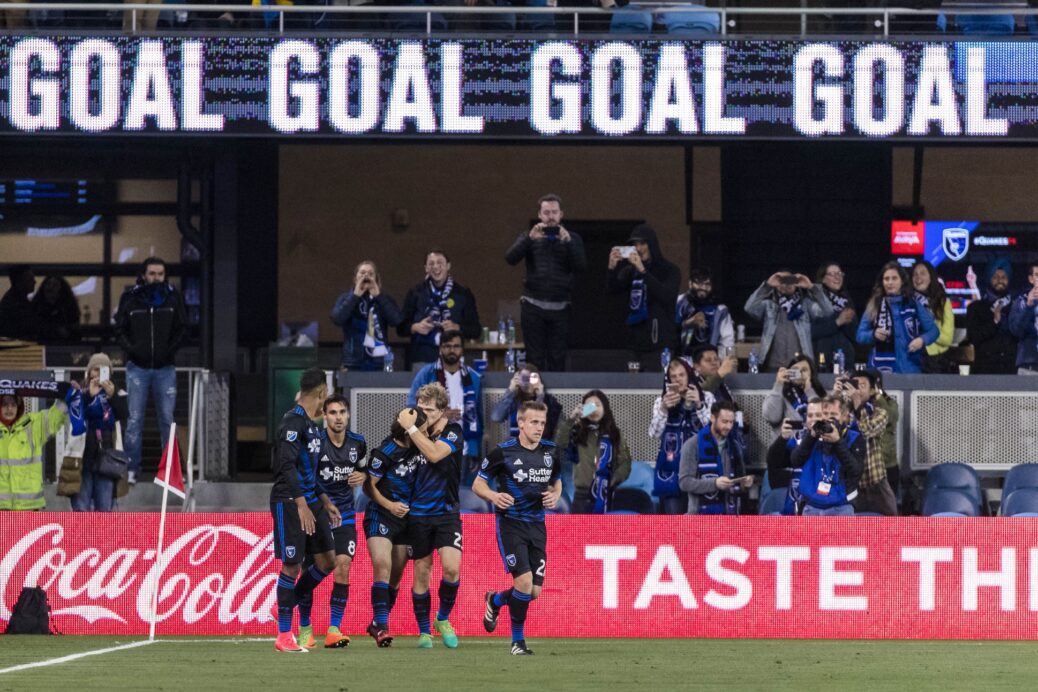 Jahmir Hyka isn’t great with movie titles. So, if you ask him if he’s seen the mid-1980’s cult classic “The Goonies,” chances are he either doesn’t remember it or never seen it at all.

However, after the new San Jose Earthquakes midfielder scored the game-tying goal at the death in the Earthquakes’ 1-1 draw against the unbeaten FC Dallas Friday night at Avaya Stadium, chances are he’ll learn about the Earthquakes’ version of “The Goonies” soon enough – especially with a current, familiar trend the Earthquakes’ are following.

Hyka fought off FC Dallas defender Atiba Harris in the box on the final attack of the match and his shot to the far post beat goalkeeper Jesse Gonzalez to help the Earthquakes salvage a needed point.

“I just followed the ball,” Hyka said about the goal, his first in MLS. “The defender missed the ball a little bit, I think, and I just went at full speed. I just took it with me and shot it.

For the second straight match, the Quakes scored a late goal to tie a match and save a point. Last week, it was Marco Ureña finding captain Chris Wondolowski in front of the net to snag a point against the Seattle Sounders. This week, the team had to show the same grit late in the match to earn a point against a talented FC Dallas squad that scored the go-ahead goal just about 10 minutes earlier.

“I think that it shows character,” Hyka said. “We showed the team spirit and that we fight until the last second. That’s important because it’s not the same if you lose or draw the game.”

But, despite the current flair for the dramatics, the Quakes has yet to win a match since their rally against the Whitecaps on March 11. They haven’t won a match in a month and are 0-2-2 since that last win.

“I’m glad we are scoring goals to tie but there are other things to address: good first half, poor second half,” head coach Dominic Kinnear said of Friday night’s performance. “I thought Dallas was creeping into the game slowly and were getting chances.”

FC Dallas made one of their chances count as Maxi Urruti’s run into the box opened up Kellyn Acosta and Acosta capitalized on his one-on-one shot against Earthquakes goalkeeper David Bingham, breaking a scoreless deadlock.

A late goal like that could demoralize some teams. The Earthquakes, apparently not so much.

The come-from-behind win in Week 2 and the recent late draws are starting to remind fans of the 2012 Earthquakes team that came from behind in several matches en route to a surprising playoff appearance, their first since returning to MLS, and their second-ever Supporters’ Shield.

Rookie defender Nick Lima wasn’t a part of the Earthquakes’ 2012 squad, although he agrees that the last-minute heroics show the club’s character, it’s not something they’ll want to fully rely on.

“It’s not something you want to do,” Lima said about constantly having to rally late in matches. “You don’t want to have to come from behind.”

Goonies never say die. The 2012 team never did and it earned them a Supporters’ Shield and a top seed in that year’s playoffs.

While these Earthquakes might still carry that same “never say die” attitude, they’re not the Goonies team from five years ago. At least, not yet.