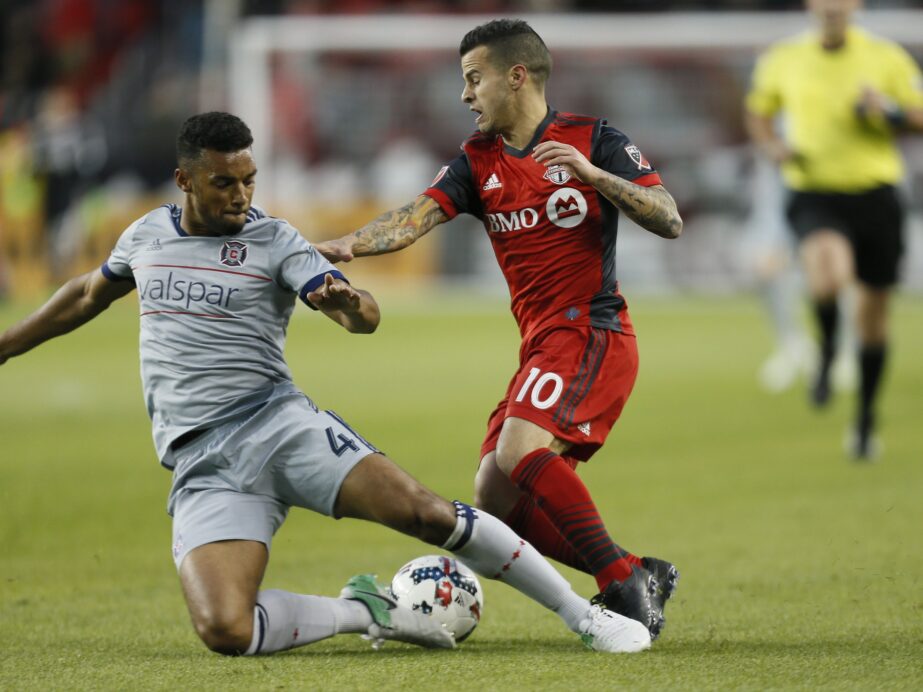 TORONTO — Major League Soccer is one of the most intricate leagues on the planet. One side can be the team to beat, and then it is mired in a losing streak within a few weeks.

Notoriously slow starts can also be disregarded. One look at the Seattle Sounders, Portland Timbers and LA Galaxy’s respective MLS Cup-winning campaigns back up that theory. Toronto FC began 2016 with just one win in five matches. It started with eight games on the road, but 2017 was eerily similar.

TFC had accumulated seven points from six matches and Sebastian Giovinco, who missed one game with a leg injury, had just one goal to his name.

Toronto’s emphatic 3-1 win over the Chicago Fire calmed some nerves. It was not just due to TFC recording its first home victory. The Reds finally looked dangerous up front, stingy at the back and the midfield was clicking. They were one of the most complete sides in MLS a year ago and had it not been for a late dip in form, the Supporters’ Shield may have crossed the Canadian border for the first time.

Giovinco’s brace was especially symbolic. The Italian had not recorded multiple goals in a game since Aug. 6 when he bagged a hat trick against the New England Revolution. The star forward’s second strike off a scintillating free kick was similar to many he has hit in the past.

A major reason behind Giovinco’s dominant display had a lot to do with a change in tempo in the final third. It’s what led to Eriq Zavaleta’s first goal since 2015 and if not for wasteful finishing, Jozy Altidore might have finished the night with a brace of his own.

“I thought the ball moved quicker tonight than in previous games,” said head coach Greg Vanney, “which means the guys up front who get the ball with the least amount of space have just a fraction more time than when the ball gets to them quicker. I thought from the backline to the midfield, everything moved faster. The ball moved faster. Seba and Jozy often times received the ball in slightly better circumstances than they have in the past.”

The rhythm in the final third had a team-wide effect as well. The defense was hounded by Nemanja Nikolic and Michael de Leeuw. Dax McCarty and Juninho were breaking up oncoming attacks, but as TFC’s ball movement picked up, the Fire could not match that pace. Toronto’s defense was under less pressure and the midfield regained control of the game, which ended up being key.

“I think the guys offensively took a step in the right direction,” said defender Nick Hagglund. “It makes our job a lot easier when we’re up by more than just one goal. It takes the pressure off. They came out and they were hungry tonight.”

However, there is no doubt that Giovinco was the standout performer.

“Obviously the goal, and he had a couple of shots where you kind think he’s going to try and bend one to the back post and he pulls it into the near post and he splits the legs of the defender,” said Vanney. “Those are just crafty finishes. Obviously the free kick is special. Once he got it over the wall, it had all of the chance to drop in. I thought he was sharp, I thought the team was, by in large, sharp.

“Are there things to build on there? Sure. Was everything perfect? No. But I’m happy with the performance, it’s a great win for the guys and for us, it’s to start building some momentum now off of this win and two more home games.”

There was a controversial moment when Giovinco was substituted in the 85th minute. The 29-year-old was clearly frustrated by Vanney’s decision to remove him from the game, but TFC’s coach had a few valid reasons.

“I miscalculated it in terms of I wanted him to have a moment where the crowd acknowledged his success on the night,” said Vanney. “I thought he was great, I thought he worked hard, I thought he was taking a lot of heat. It was a moment for me and for the crowd to give him appreciation for the things he did tonight. That was the ultimate reason I was looking for.”

“I thought he was tremendous. For me, it was supposed to be a show of respect from the crowd to him that we appreciate what he does.”

There are still 27 games remaining until the end of the regular season. Injuries, suspensions, international call-ups, travel, weather and many other underlying factors will take their toll on TFC’s form, much like every other MLS team. But it is a positive to see the Reds playing with a free-flowing and fluid attack at home. That can only serve them well for the rest of the year.