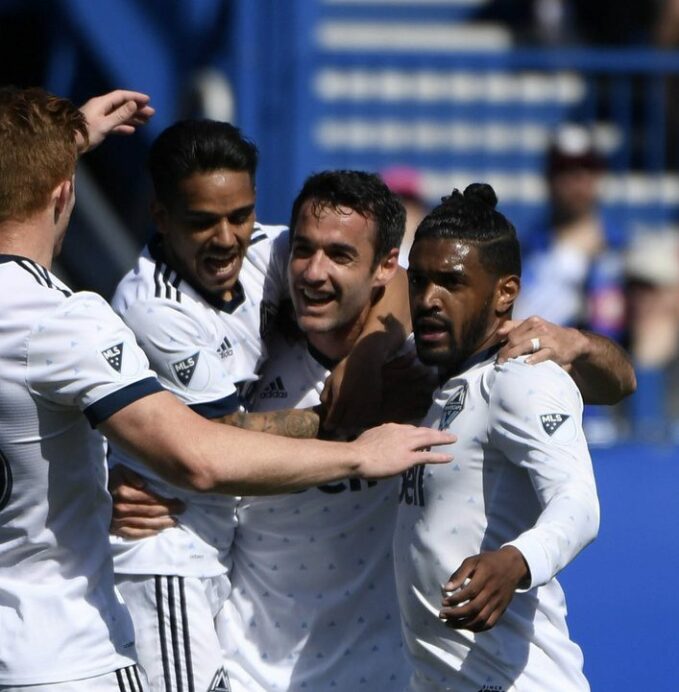 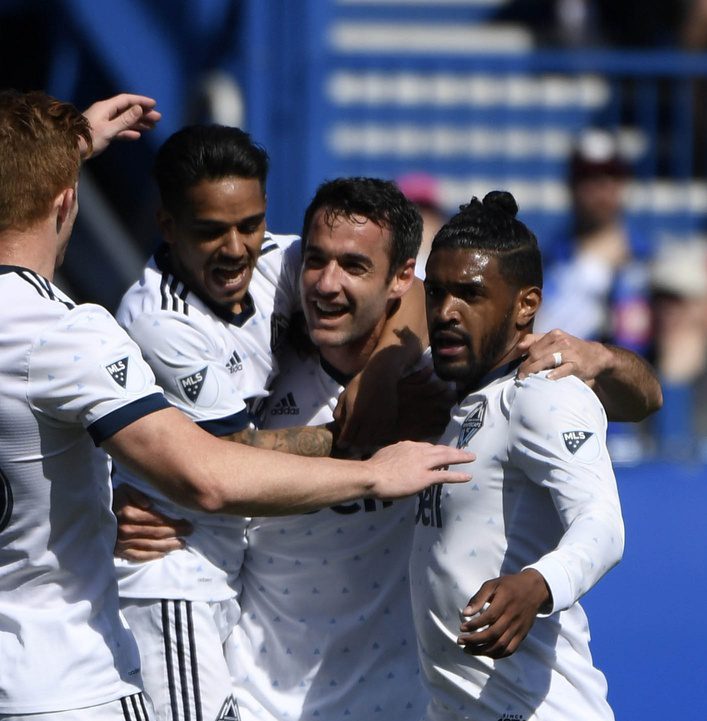 MONTREAL — Vancouver Whitecaps captain Kendall Waston has a rather unique way of celebrating: Slapping teammates in the face.

Waston and the Whitecaps had a reason to be excited. After trailing 1-0 at Stade Saputo against the Impact, Vancouver tied the score in the first half after a beautiful volley finish by Andrew Jacobson, and completed the 2-1 comeback win with a goal by Christian Techera. All this to snap the team’s three-game losing streak on the road and earn the Whitecaps’ first points away from BC Place.

Following his tying goal, Jacobson admitted to bracing himself for the 6-foot-5 Costa Rican’s sign of affection.

“I had a feeling it was coming,” said Jacobson. “To be honest, I’m just used to it by now. He’s inspirational to the team and he brings a lot of energy and sometimes that’s the form it comes in.”

For Waston, getting a result on the road is of high importance for his team.

“We want to start to build up our confidence by winning,” said Waston. “It’s the only way the we can be in the playoffs at the end of the year.”

“We didn’t want to fly so long to go back home with no points.”

Head coach Carl Robinson praised Jacobson for the performance he brought to Montreal. Without being the most striking player on the Caps roster, the Pao Alto, California native was the team’s best on Saturday with one goal and one assist.

“[Jacobson] is a mature player and he put in a mature performance today,” said Robinson. “We know that Montreal have a very good midfield with [Marco] Donadel, [Hernan] Bernadello and Patrice [Bernier], we needed to stop that and I think he certainly did that.”

With the high number of players out on injury—11 in total—the Whitecaps flew out every fit player they still had to get the result. Given the situation, the road win could kick-start the team’s early string of questionable results.

“It’s difficult to win on the road, we know that,” said Robinson. “Hopefully it will give them some confidence leading up to this week’s game on Friday night but if you perform like that, we’ll win more games than we lose.”

The two teams will see each other very shortly as one of the semi-finals of the Canadian Championship has Vancouver matching up against the Impact.

After a decent performance in a 2-1 to the Portland Timbers on April 22 and this first road win in Montreal, the Whitecaps grew a renewed confidence. That being said, the win in Montreal doesn’t mean Vancouver has an edge coming into the tournament in the eyes of Robinson.

“Every game that we play against Montreal or Toronto is different and sometimes, because of the Canadian Championship, managers might decide to rotate,” said Robinson. “We learnt [from this game] that this is probably going to be a passionate and emotional game when we come back in a couple of weeks.”

For Montreal, with Matteo Mancosu and Anthony Jackson-Hamel both coming off injured, the Impact are living the start of a roster crisis.

The nature and length of both players’ injury remain unclear but the current striking situation lies on Michael Salazar, who has only subbed on for mere minutes in two games this season, and 2017 first-round pick Nick DePuy who has yet to play this season. Dominic Oduro has also been used at the striker position when needed in the past.

“I don’t know the extent of the injury but the next man has to step up, I have to step up, we all have to step up because there’s the next game and they’re probably not going to be there,” said Patrice Bernier. “The next men or the next system that will be put in the next 11 has to show a lot more bite and intensity to grind out results.”