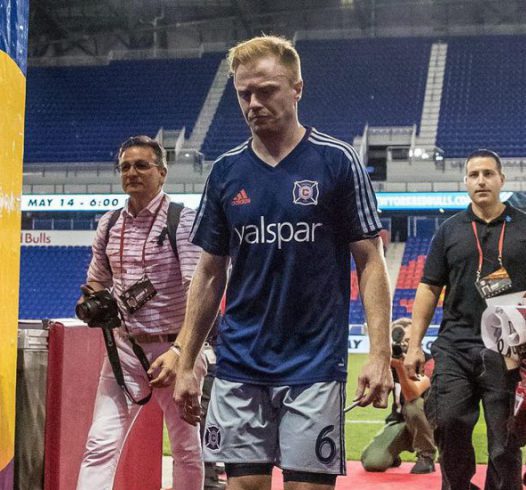 An offseason trade forced him out of that home, and, to this day, it still stings. On Saturday evening, though, there wasn’t a person on this planet that could tell Dax McCarty when he was ready to leave a place that meant, and still means, so much to him, trade or no trade.

Over an hour after the Chicago Fire’s 2-1 loss to the New York Red Bulls ended, McCarty remained. His teammates filed out one by one from the visitors locker room, many frustrated with the sting of defeat. His opponents, his former teammates, emerged as well to their awaiting families, departing with more of a smile from a job well done.

But McCarty wasn’t ready to leave. He slowly made his way around the stadium, stopping to talk to anyone willing to talk back. He signed autograph after autograph, took picture after picture, with fans who sang his name, not their team’s, at the final whistle.

McCarty may not make the drive to Red Bull Arena like he once did but make no mistake: that building, that field, those corridors all still feel like home.

“I needed to do it,” McCarty said after making his way all over Red Bull Arena. “The fans that waited for me, it was more than I ever could have imagined. The people here are just good people. They’re really loyal. The words that they said to me really mean a lot to me. I’ll always remember them and I just wanted to show them how much they meant to be by sticking around for anyone who was willing to stay.

“I would have stayed out here all night to sign autographs or took pictures if I had to. I appreciate them.”

From the onset, the Fire emerged on the front foot. They created chance after chance and, even once the Red Bulls went ahead through Bradley Wright-Phillips, the visitors continued to push. Naturally, it was McCarty who provided the breakthrough, feeding Nemanja Nikolic for the assist on what turned out to be the Fire’s lone goal.

McCarty called the sequence a “broken play,” but his efforts were anything but broken. After receiving the ball at the top of the box, McCarty faked his way path both Red Bulls centerbacks before sliding a pass to the oncoming Nikolic. His celebration was admittedly muted, aside from one loud roar. McCarty was in the moment, focusing on pushing his side through what turned out to be a physical, grind of a match.

Right away, a tone was set, and McCarty was fully comfortable playing his part. In the 25th minute, he clattered Wright-Phillips, his longtime teammate. In the 82nd, he was dragged down by his former midfield partner Felipe. You have to match physicality against the Red Bulls, McCarty said, and he was determined to do so, friends or not.

“It was always going to be like that,” McCarty said. “Brad told me to make sure I wore my shin guards, so I did. We got into a few battles, a few tussles. That’s the nature of the business. That’s the game. You’re good friends with those guys, but when you’re on the field, you’re competing to win and that’s what happened.”

The appreciation for McCarty began early via a video montage, one McCarty admittedly caught little of as he warmed up before the match. That quickly went out the window, though, as any emotion or nostalgia disappeared quickly as the match began.

McCarty’s new team also recognized the occasion, though. Head coach Veljko Paunovic made the veteran midfielder captain for Saturday’s match, adding that it was important for him to lead the team on the day.

“I think he impacted the game,” Paunovic said. “A lot of challenges he won in the middle of the park. In the end, he assisted on the goal. It was consistent play, which is very consistent for him. Winning the ball, winning one duel after another and assisting Nico. It was great.”

“Listen, in terms of Dax’s role in tonight, and role with the fans, like you know, this is what it should be,” added Red Bulls head coach Jesse Marsch. “I think that’s what it should be. There should be an attachment to big players that have been in the club, and obviously the club always comes first, but there’s strong relationships that have been built over time. This club has a lot of big faces and big names that have been a part of it, and the fans should enjoy those players and always treat them like they are family.”

When it was all done, McCarty was, in some ways, both overwhelmed and underwhelmed at the same time. His team lost, and, ultimately, that’s the biggest takeaway. The emotional parts were all well and good, but McCarty knows Saturday would have tasted much sweeter if he left Red Bull Arena victorious.

Yet, the support was something special, something befitting of his contributions to the club. The experience was “strange”, McCarty said, and it was one that he wasn’t fully prepared for.

Now, he’s glad it’s over. He’s glad to move past it, a day that he’s been looking forward to for several months. His time as a Red Bull has come and gone, and Saturday’s events allowed him to finally turn the page to something new.

“I was really looking forward to it,” he said. “Now that it’s over, it’s even more of a relief. Just to get it over with, there was a lot of hoopla surrounding the game, a lot of stuff written, a lot of chatter, but you just have to go out on the field and try to get through it.

“It’s emotional. It’s frustrating to not win. That’s what I’m most upset about. You stick around after the game and sign these autographs and you’re really pissed off inside that you didn’t win. That’s something that will bother me but we lost to a pretty good team and I thought the performance merited more than a loss.”