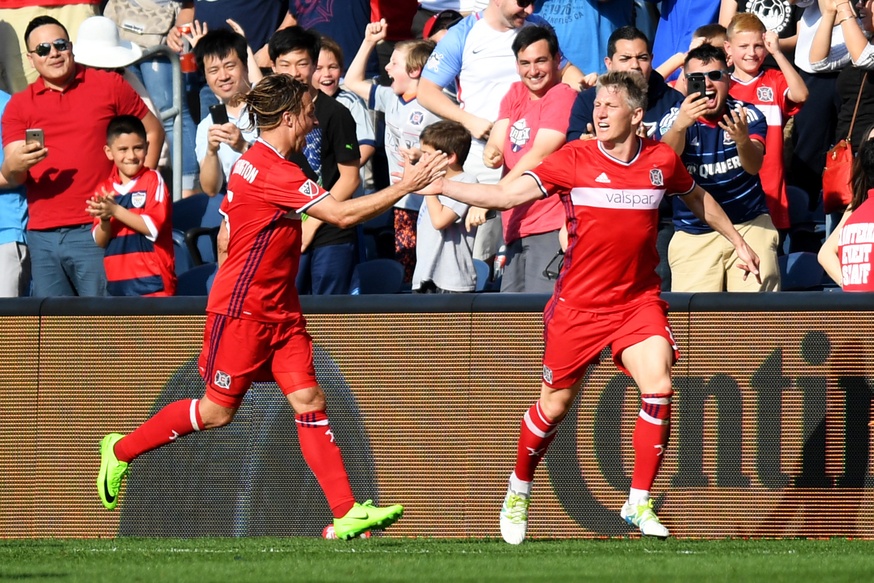 Nemanja Nikolic fired a brace while Bastian Schweinsteiger added a goal of his own in a 3-0 Fire win at Toyota Park. The win is the Fire’s second-straight victory and third-straight match without a loss.

Schweinsteiger opened the scoring just moments before halftime, scoring his second goal since joining the club. After receiving a pass from Luis Solignac, the German star held off two defenders before firing a tight-angle shot, giving the Fire the 1-0 lead.

Just seconds into the second half, Nikolic doubled that lead, pouncing on a rebound in front of goal to push the scoreline to 2-0. The Hungarian added another in the 72nd minute as he darted onto a perfectly-weighted pass from David Accam for the third and final goal of the day.

The Fire’s onslaught was made possible by an early dismissal of Je-Vaughn Watson. The Revs defender earned a pair of early yellow cards, with his second and final misstep of the day resulting in a 27th-minute dismissal.

With the win in their back pockets, the Fire now look towards a visit to Toronto FC next time out while the Revs move on to a midweek clash with the San Jose Earthquakes.

With two goals on the day, Nemanja Nikolic showed exactly what the Fire expected when they signed him to a Designated Player deal during the offseason. The Hungarian star was in the right places at the right time, helping fire his team to a big win.

The goal is to always get to halftime as the minutes wind down, but the Revs were unable to do so on Saturday. Bastian Schweinsteiger’s late first half goal changed the whole tone of the first half before the push truly began in the second 45.

Je-Vaughn Watson lasted just 27 minutes and in those 27 minutes he cost his team a man and, ultimately, the game.