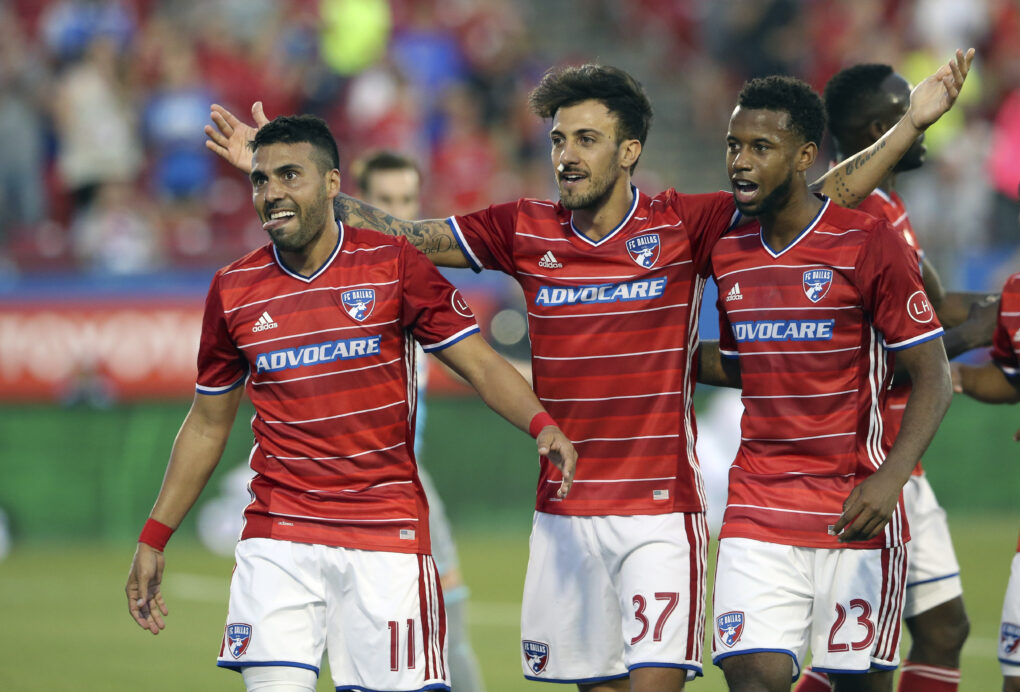 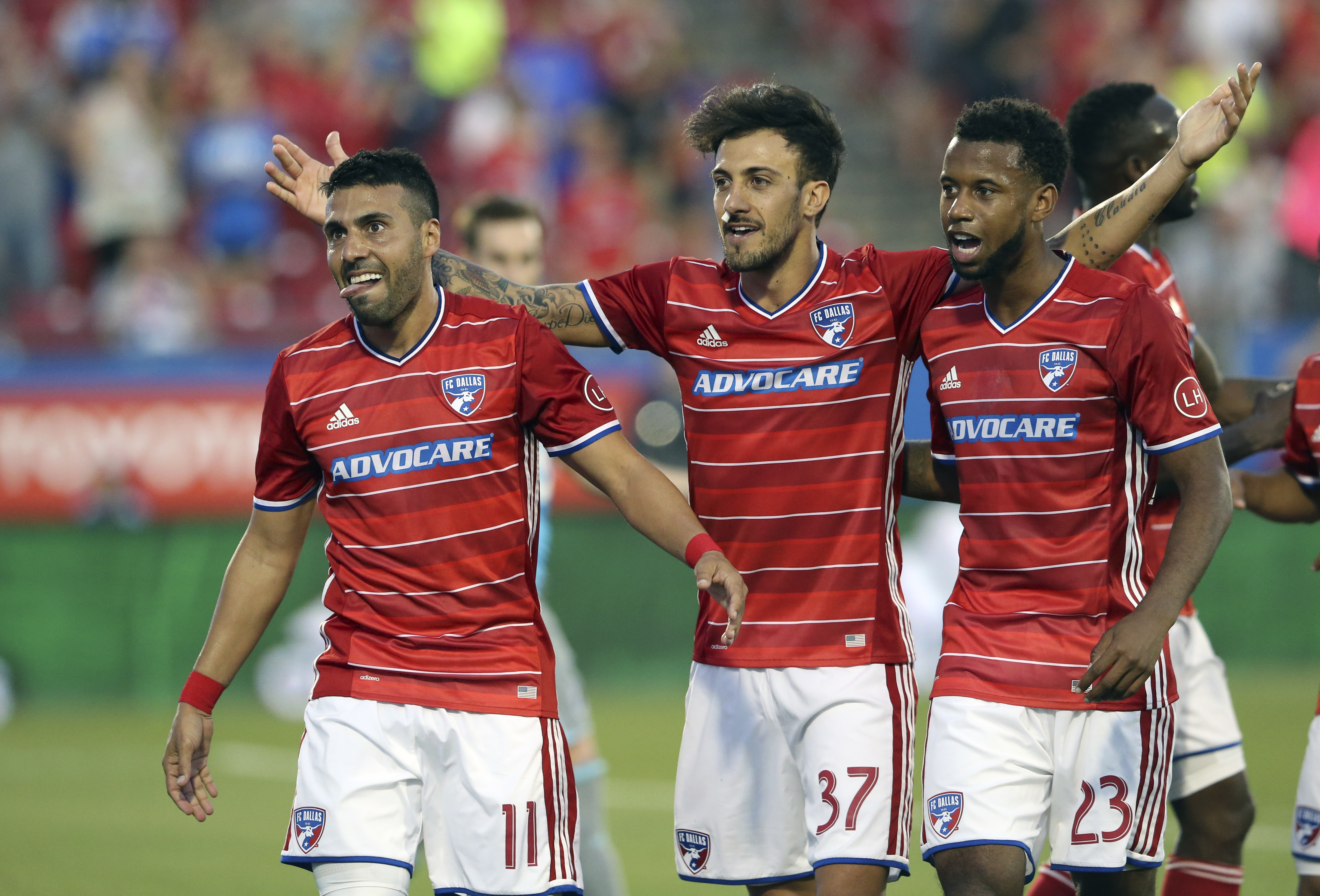 Week six of the MLS regular season is in the books, and it brought some shakeups to this week’s power rankings.

Several teams at the top struggled, as just three of the top ten managed to earn victories this weekend, while the likes of New York City FC, the New York Red Bulls, the Houston Dynamo, and the Columbus Crew all lost to lower-ranked opposition. FC Dallas, the Portland Timbers, and Sporting Kansas City will reap the benefits of their victories as they retain places near the top.

Several teams near the bottom found success, most notably Real Salt Lake in their first match under new coach Mike Petke as they dispatched the Vancouver Whitecaps by a 3-0 scoreline for their first win of the year. Others continue to struggle, as the Philadelphia Union and Montreal Impact remain winless through week six.

THIS WEEK:  at San Jose Earthquakes on Friday.

OUTLOOK: FC Dallas remains the team to beat in MLS, as the defending Supporters’ Shield winners continue their unbeaten start to the season with a 2-0 beatdown of Minnesota United. Javier Morales and Michael Barrios contributed the goals for Dallas, as they now prepare for a trip to the West Coast on Friday as they visit the Quakes.

OUTLOOK: The Timbers continued their hot start to the year on Saturday, as they melted the Philadelphia Union defense to the tune of three goals. Darlington Nagbe, Roy Miller, and Fanendo Adi found the back of the net, with Adi seizing the team record for career goals, as the Timbers earned their fourth win of the year. They’ll look to keep it going against a hot Sporting KC team coming off a win of their own.

OUTLOOK: Toronto FC has started the season with the definition of mediocrity, earning the fourth draw in five matches as they battled Atlanta United to a 2-2 stalemate. A spectacular goal from Sebastian Giovinco, assisted by Jozy Altidore, wasn’t enough to overcome a brace from Hector Villalba, who bookended the match to leave things even. Toronto must now face a deceptively strong Crew team in Columbus this weekend.

THIS WEEK: at the Vancouver Whitecaps on Friday.

OUTLOOK: Despite an 84th minute goal from Nicolas Lodeiro to seize a late lead, the Sounders couldn’t hold off the legendary Chris Wondolowski, who equalized for the Quakes in the 90th minute. The draw makes it three even contests in five matches for the Sounders, who have floundered a bit to start the year. They’ll visit Cascadia rivals looking for a win in the far North as they take on the Whitecaps on Friday.

OUTLOOK: Atlanta United went on the road to Canada and battled Toronto FC to a 2-2 draw last weekend. A Hector Villalba brace opened and closed the scoring and helped Atlanta battle back to earn a point in hostile territory. They stay in the great white North this weekend as they take on the Montreal Impact in the latter’s home opener.

THIS WEEK: at the Portland Timbers on Saturday.

OUTLOOK: Another one of the few remaining unbeaten teams, Sporting Kansas City earned their second win of the year with a 3-1 drubbing of the Colorado Rapids last weekend. Goals from Seth Sinovic, Gerso, and Dom Dwyer capped a dominating performance for Sporting KC, who surrendered a late garbage-time penalty goal to Kevin Doyle. They’ll face a stiff test this weekend as they go on the road to take on the Timbers.

LAST WEEK: Lost to the New England Revolution, 2-0, on Saturday.

OUTLOOK: In the shock result of the weekend, the Houston Dynamo fell to a pair of goals from the Revolution’s Kei Kamara and Juan Agudelo, as the Dynamo offense could get nothing going. Erick ‘Cubo’ Torres and company will hope to recover their shooting boots when they welcome Minnesota United to the much warmer heart of Texas.

THIS WEEK: vs. the LA Galaxy on Saturday.

OUTLOOK: A first-half goal from Servando Carrasco off a well-executed corner kick was enough to earn Orlando City all three points at home against the Red Bulls last weekend. The Lions defense has stood tall, allowing the team to win three of their first four matches with just four total goals. Now they’ll take on the Galaxy as they hopefully generate a bit more offense.

THIS WEEK: at the Philadelphia Union on Friday.

OUTLOOK: Though David Villa scored his third goal against D.C. United this season on Saturday, it wasn’t enough for NYCFC to overcome several defensive lapses as they fell by a 2-1 scoreline. Goals from Luciano Acosta and Lloyd Sam sealed NYCFC’s fate, as DCU earned some revenge for their 4-0 loss a few weeks ago. Now NYCFC travel to Philadelphia where they take on the struggling Union.

THIS WEEK: vs. the New England Revolution on Saturday.

OUTLOOK: Nemanja Nikolic got to play the hero for his new team on Saturday, as his 22nd minute goal proved the lone score of the afternoon as the Fire dispatched the Crew, 1-0. The Fire earned their second victory of the young season as they continue to perform well. They’ll aim to continue that against the New England Revolution at home on Saturday.

LAST WEEK: Lost to the Chicago Fire, 1-0, on Saturday.

OUTLOOK: Despite outshooting their opponents last weekend, the Crew offense couldn’t manage to put anything on the scoreboard, and a Nemanja Nikolic goal for the Fire sealed their 1-0 defeat. The Crew now welcome a Toronto FC team that has struggled so far this season, drawing four of their first five.

THIS WEEK: vs. FC Dallas on Friday.

OUTLOOK: Somehow, even after all these years, defenses can’t manage to keep Chris Wondolowski out of the back of the net. After the Seattle Sounders seized a late lead with an 84th minute goal from Nicolas Lodeiro, Wondo found the back of the net in the 94th minute to save the day for the Quakes. The escape artists now travel south to Texas where they’ll take on unbeaten FC Dallas.

OUTLOOK: The New York Red Bulls continued their relatively slow start to the season on Saturday, as they traveled South to Orlando City and returned home empty handed in a 1-0 defeat. A goal from Servando Carrasco earned three points for the hosts, as the visitors dominated possession but proved wasteful overall. The Red Bulls now return home to face long-time rivals D.C. United and try to turn things around.

OUTLOOK: The Galaxy earned their second win of the young season last weekend, securing a 2-0 victory over the Montreal Impact. Goals from new midfield acquisitions Romain Alessandrini and Jermaine Jones proved the difference for the hosts, who took advantage of an ejection to the Impact’s Marco Donadel and earned the win. They’ll now travel down to Florida to take on the red-hot Orlando City.

OUTLOOK: The Revs pulled off the upset of the weekend in their shutout victory over the Houston Dynamo. Two goals from Kei Kamara and Lee Nguyen earned the Revs all three points as their defense stifled the strong Dynamo attack. Now they’ll take their success on the road against the Fire, coming off their own win last weekend.

THIS WEEK: at the New York Red Bulls on Saturday.

OUTLOOK: D.C. United earned some revenge after NYCFC beat them 4-0 last time they met, securing a 2-1 victory over their East coast competitors. Goals from Lloyd Sam and Luciano Acosta, with help from some bad decision making from Frederic Brillant, were enough to hold off a David Villa goal and earn all three points for the hosts. They’ll now take on the Red Bulls as they travel to face their long-time rivals at RBA.

OUTLOOK: There weren’t many positives to take away from Sunday’s 3-1 loss to Sporting KC. The Rapids were out of contention for the vast majority of the match and could only manage an stoppage-time penalty goal offensively as SKC sliced up their back line. The Rapids will need to bounce back at home this weekend as they welcome Mike Petke’s successful Real Salt Lake.

THIS WEEK: vs. the Seattle Sounders on Friday.

OUTLOOK: For a team called the Whitecaps, Vancouver looked lost in the snow against Real Salt Lake, as they were dominated in a 3-0 defeat. The snowstorm lead to some sloppy play, but the Whitecaps came out on the wrong end of things in Utah. They’ll now hope to avoid the snow when they return home to face their Cascadia rivals, the Seattle Sounders.

OUTLOOK: Now one of just two winless teams remaining in 2017, the Impact had a woeful weekend against the LA Galaxy. After Romain Alessandrini put the visitors up, Marco Donadel was sent off for a tackle on Jermaine Jones, who promptly provided the second for the Galaxy to secure the hosts’ victory. The Impact finally have their season opener this weekend, but face a difficult opponent in Atlanta United.

THIS WEEK: at the Houston Dynamo on Saturday.

OUTLOOK: Minnesota United suffered a bit of a letdown after earning their first win two weeks ago, falling to FC Dallas 2-0 in Texas on Saturday. The loss represents the first time the Loons have failed to score this year, as Dallas simply shut down their attack. They’ll stay in Texas this weekend as they visit the ever-dangerous at home Houston Dynamo.

THIS WEEK: at the Colorado Rapids on Saturday.

OUTLOOK: A new manager often has an instant impact, and what an impact it was for Mike Petke and Real Salt Lake. The revitalized team took on the Whitecaps in a snowstorm on Saturday and emerged victorious with a 3-0 result. Three second-half goals from Albert Rusnak, Yura Movsisyan, and Luke Mulholland earned RSL their first win of the year, and now they’ll hope to visit the Colorado Rapids and keep it rolling.

LAST WEEK: Lost to the Portland Timbers, 3-1, on Saturday.

THIS WEEK: vs. New York City FC on Friday.

OUTLOOK: Things have gone from bad to worse in Philadelphia, as the Union remain winless on the year after taking a beating at home from the Portland Timbers. An opening-goal from Richie Marquez gave the Union hope, bit that was quickly dashed by goals from Darlington Nagbe, Roy Miller, and Fanendo Adi. The Union now face New York City FC coming off a loss of their own this past weekend.