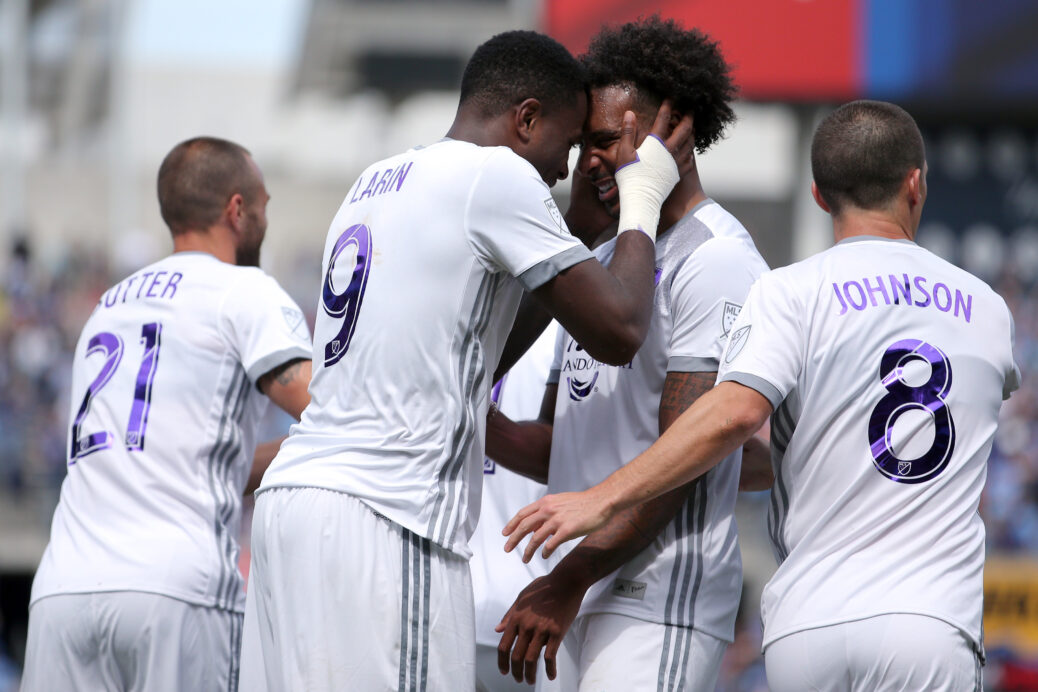 With week eight of MLS action wrapped up, things remain at the status quo at the very top and very bottom of this week’s SBI MLS Power Rankings.

FC Dallas secured their top spot with gusto, dispatching their immediate competition in second-place Sporting Kansas City in a strong, defensive 1-0 win. The Portland Timbers and Orlando City also made their claims to remain near the top of the rankings with each earning 2-1 victories over their respective oppositions.

The Philadelphia Union, meanwhile, sit on the exact opposite end of the spectrum. Now winless through their first seven matches of the year, this week’s draw will sting harshly after holding and losing a 3-0 lead to the Montreal Impact. The Colorado Rapids are right there with them, as they dropped they’re now winless in five after dropping three points in Minnesota, giving a clean sheet to the league’s worst statistical defense.

The middle of the rankings are a mix-up of movers and shakers. With some teams proving themselves after cold starts and others falling back to the pack after red-hot openers.

THIS WEEK: vs. the Portland Timbers on Saturday.

OUTLOOK: There isn’t a much better way to keep your place at the top than by beating the team directly behind you. FC Dallas handled their business against Sporting KC with effective defense and as a result, maintain their location at the top of the rankings. The league’s only remaining unbeaten team faces another stiff challenge as the Portland Timbers come to town this weekend.

THIS WEEK: vs. the Colorado Rapids on Saturday.

OUTLOOK: Perfect at home, Orlando City showed they can win on the road too with their 2-1 victory over New York City FC at Yankee Stadium. The win gives the Lions a ridiculous 15 points through six matches, good for a league-best 2.5 points per match. They return to their fortress this weekend as they take on a laggard Colorado Rapids team coming off a bad loss.

OUTLOOK: It was a great run to begin the year, but Sporting Kansas City finally fell off the unbeaten bandwagon with last weekend’s 1-0 defeat at the hands of FC Dallas. Losing to FCD is certainly nothing to hang your head over, and Sporting KC has left themselves in a strong position to begin the year. Bouncing back starts this weekend as Real Salt Lake come to town.

OUTLOOK: Though FC Dallas may be the top dog in the Power Rankings, the Portland Timbers currently reign supreme in the Western Conference, as solidified by their 2-1 win this past weekend. FCD has played two fewer matches, however, so the Timbers will be looking forward to further establishing their claim when they travel to Texas this weekend.

THIS WEEK: vs. the Houston Dynamo on Friday.

OUTLOOK: When Giovinco is on, Toronto FC look like an entirely different team from the group that won just one of their first six matches. The diminutive forward recorded a brace as Toronto FC took all three points in their home opener to hopefully get back on track. They’ll hope to repeat their home success with a second consecutive win as the Houston Dynamo come to town.

THIS WEEK: vs. the New England Revolution on Saturday.

OUTLOOK: The Seattle Sounders put on the most comprehensive performance of the weekend, going into the LA Galaxy’s turf and coming out with three points in dominating fashion. The Sounders have been up and down so far this year, but if this is an indication of things going forward, the rest of the league better watch out. They’ll return home to welcome the Revs on Saturday.

THIS WEEK: vs. D.C. United on Sunday.

OUTLOOK: Atlanta United bounced back effectively from last week’s loss by dismantling Real Salt Lake on the road to the tune of a 3-1 win. Even without Josef Martinez, the visitors were in strong goalscoring form thanks to Hector Villalba, Yamil Asad, and rookie Brandon Vasquez, who sealed the win late. They’ll return to Bobby Dodd this weekend and welcome D.C. United to town.

OUTLOOK: New York City FC still haven’t found a way to stop Cyle Larin, who burned them for a brace in Sunday’s match for his ninth goal in seven matches against NYCFC. The loss isn’t killer against the current top points-per-game team in the league, but surely stings coming from former coach Jason Kreis. They’ll hope to bounce back, but won’t have an easy path as the Columbus Crew have been strong early on this season, especially at home.

OUTLOOK: After dropping their first points at home this year in last week’s draw vs. Minnesota United, the Dynamo bounced back to winning form by taking down the Quakes, 2-0. The Dynamo are now 4-0-1 at BBVA Compass Stadium, but remain winless and without a point on the road this year. They’ll need to figure that out quickly, as they visit Toronto FC with a rejuvenated Giovinco this weekend.

THIS WEEK: vs. the Chicago Fire on Saturday.

THIS WEEK: at the New York Red Bulls on Saturday.

OUTLOOK: Sure, a 3-1 loss isn’t an ideal result, but defeating Toronto FC at BMO Field when Giovinco is on is a tall task for any team. The Chicago Fire should still be pleased with their position through seven matches, and even moreso with how the team has looked via the eye-test early this year. They’ll face another difficult road trip when they visit the New York Red Bulls this weekend.

OUTLOOK: The Columbus Crew had the misfortune of running into a New York Red Bulls that appears to be figuring things out last weekend, and ultimately lost 2-0. Still, much like the Fire, the Crew should be pleased with their current position at second in the East. They’ll face their second straight New York opponent when NYCFC comes to town this weekend.

LAST WEEK: Tied the New England Revolution, 0-0, on Wednesday; Lost to the Houston Dynamo, 2-0, on Saturday.

OUTLOOK: Two matches and only one point to show does not a good week make. After a listless, scoreless draw against the Revs in midweek play, the Quakes dropped all three points visiting the Dynamo in a 2-0 loss. The Quakes have quickly cooled off after two straight wins to open the year and are now winless in their last six, with just three points in that span. They’ll face no less difficult a test in cold Minnesota this weekend.

LAST WEEK: Lost to the Portland Timbers, 2-1, on Saturday.

OUTLOOK: A win against one Cascadia rival, a loss against the other. Not a bad two weeks for the Whitecaps, though they would’ve hoped for the clean sweep. It’s difficult to beat the Timbers when Darlington Nagbe is scoring rockets from outside the box and mean-mugging afterwards. The Whitecaps will hope to bounce back against Canadian competition this weekend as they visit the Montreal Impact.

THIS WEEK: at the Seattle Sounders on Saturday.

OUTLOOK: The Revs couldn’t establish themselves in either of their two matches this past week. After a listless midweek draw against the Quakes, there were more goals flying around on Saturday, but no more points in a 2-2 draw against D.C. United. The Revs haven’t won in their last three, and that’s at threat of becoming four when they visit the Seattle Sounders after the latter’s comprehensive victory last weekend.

THIS WEEK: at Atlanta United on Sunday.

OUTLOOK: D.C. United wasn’t able to find their rhythm on the road this past weekend, as they took a 2-1 lead into halftime at the Revs but were unable to hold on and ultimately settled for a point in a 2-2 draw. DCU has had a mixed bag of results so far this year, but have looked lackluster on the road. They’ll hope to change that when they visit Atlanta United this weekend.

OUTLOOK: Is it possible that this Minnesota United team is turning around from their dreadful start to the season? Maybe, as they secured their second win of the year and seventh point in their last four matches by defeating the Colorado Rapids 1-0 last weekend. More impressive than the win was the clean sheet secured by the league’s leakiest defense, a hopeful sign of things to come perhaps. They’ll try to duplicate their success this weekend at home when the Quakes come to town.

THIS WEEK: vs. the Vancouver Whitecaps on Saturday.

OUTLOOK: What do you get when a winless team welcomes a team that hasn’t won on the road? Apparently you get a goal-fest of a draw. After the Philadelphia Union took a 3-0 lead early in last weekend’s match, the Impact battled back admirably to spoil the party and earn a 3-3 draw on the road. The point will feel like a moral victory, but the Impact could use a real one at home this weekend against the Whitecaps.

OUTLOOK: More bad news for the LA Galaxy amidst their cold start to the year. The Seattle Sounders came in on Sunday an just obliterated the hosts to the tune of a 3-0, comprehensive win. It’s the Galaxy’s fifth loss in their first seven and their second straight. They’ll need to rebound quickly, beginning when the winless Philadelphia Union come to town. A loss this weekend would rightly set off a few alarms.

OUTLOOK: Nothing stays perfect forever, and that holds true for Mike Petke’s Real Salt Lake as they suffered their first defeat under their new head coach, 3-1 to Atlanta United. It was a harsh drop back to the form of the first five matches of the year, and one RSL will be hopeful to pull themselves out of this weekend. They’ll travel to Missouri to take on a strong Sporting Kansas City team who is coming off their first defeat of the year.

OUTLOOK: This was not the start the Rapids expected. After winning their opener, the Rapids have gone winless in their last five, losing four of those matches and three straight. This week’s loss particularly stings as their attack was unable to score against the league’s worst defense. They’ll face no easier a test in Orlando City Stadium this weekend.

THIS WEEK: at the LA Galaxy on Saturday.

OUTLOOK: What can be said that hasn’t already? The Union took a 3-0 lead on Saturday and it looked to all watching that they’d finally earn that elusive first win of the year. But it wasn’t to be, as a second-half onslaught from the Impact stole a point away in a 3-3 draw at the full-time whistle. The Union are now winless through seven, with just three points to show in the league basement. Can they find their win against the Galaxy coming off a brutal loss of their own?