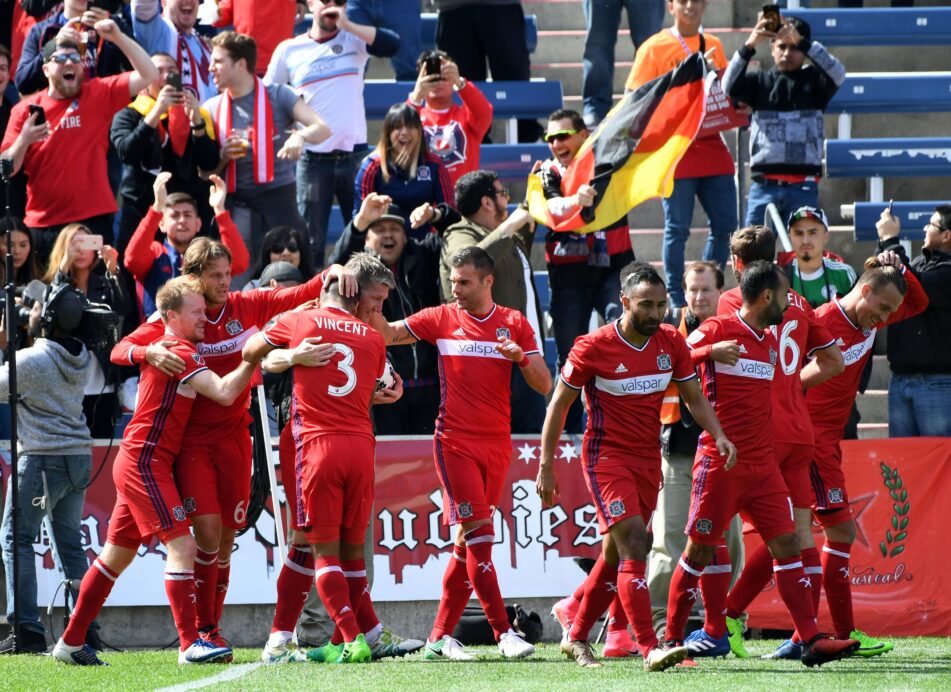 Bastian Schweinsteiger’s Chicago Fire debut started in unforgettable fashion, but it was the ending of the match that left a lasting impression on Saturday afternoon.

The German star scored his first goal just moments into his MLS debut, but the Fire and Impact saved the fireworks for late in a 2-2 draw. Both sides exchanged stoppage time goals, sealing a split of the points in Bridgeview.

In stoppage time, the Impact looked to seal the victory, as Ballou Jean-Yves Tabla fired home a Patrice Bernier assist to seal the win. Moments later,  Luis Solignac scored on an assist from Dax McCarty, providing a shocking ending to a memorable match.

It took Schweinsteiger just 17 minutes to announce his arrival to MLS as he scored his first Fire goal. The German star’s goal came via a bullet header, as Schweinsteiger thumped home a David Accam cross to give the Fire the early 1-0 lead.

That lead lasted until the 61st minute, when the Impact jumped back into the match via a Matteo Mancosu finish. The Italian, whose goal was his second of the young season, finished much like Schweinsteiger, smashing a header from close range.

Schweinsteiger’s finish came just minutes after a close call, one which saw his volleyed effort blocked on its way to goal. Accam was also active in the opening moments, as his early shot was deflected away for a corner kick.

The Impact, meanwhile, struggled without star Ignacio Piatti, who missed out on Saturday’s match due to injury. On the road without their attacking leader, it took until the second half for the Impact to register a meaningful chance, one which saw Fire goalkeeper Jorge Bava parry away a simple header from Chris Duvall.

Finally, in the 61st minute, the Impact broke through via Mancosu’s goal. Just 10 minutes later, matters went from bad to worse for the Fire, who lost Juninho for a second yellow card, leaving the hosts with 10 men for the final 20 minutes. Several moments later, Victor Cabrera earned a dismissal of his own as both sides finished down a man.

The Impact now look towards Friday’s visit to the LA Galaxy as the club hunts for its first win. The Fire, meanwhile, move on to next Saturday’s clash with the Columbus Crew.

In addition to his goal, Bastian Schweinsteiger’s impact was very much noticed. The midfielder helped create several chances while showing a new level of composure on the ball, offering the Fire a new element that should lead to better results as the season wears on.

Ballou Jean-Yves Tabla’s first MLS goal was a memorable one, but it was soon undone by Luis Solignac’s stoppage-time equalizer. The two teams combined for a stunning ending, but it was Solignac’s finish that would prove decisive.

The new-look Fire midfield had its moments, but Juninho’s late dismissal ended the initial look on a sour note. Now, the team will manage without the veteran midfielder, who wasn’t at his best when he was on the field on Saturday.