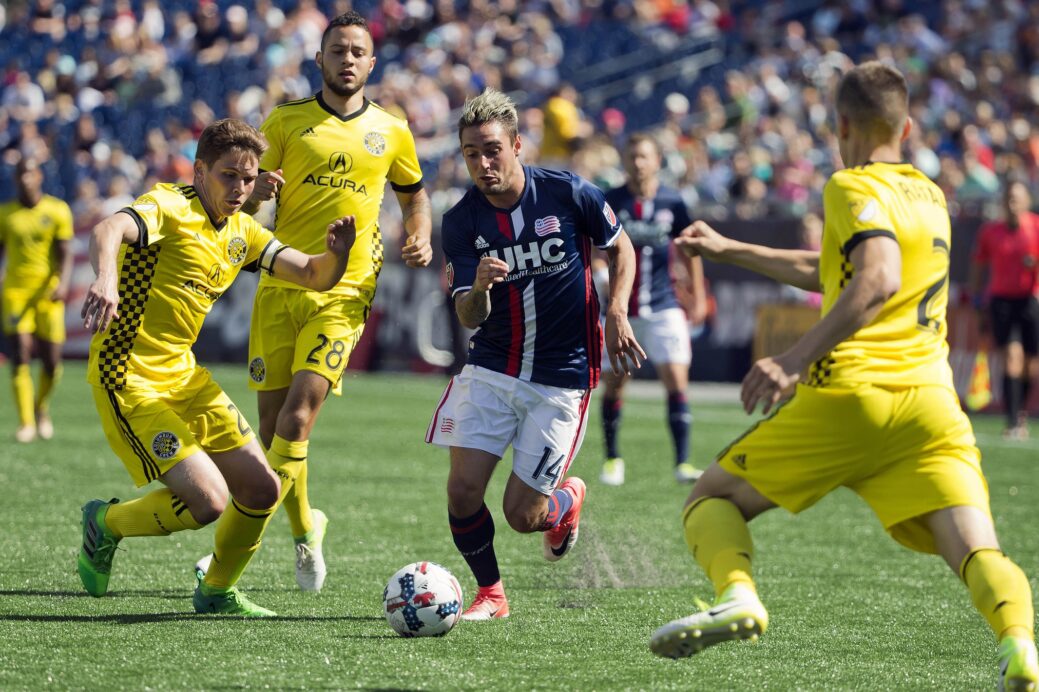 FOXBOROUGH – New England Revolution winger Diego Fagundez has quietly been heating up over the past month and it finally paid dividends with his first brace since May 2014.

After scoring his first goal of the season in last weekend’s win over Real Salt Lake, Fagundez had both tallies to rally the host Revolution back from an early deficit to beat the Columbus Crew, 2-1,  in front of a crowd of 18,651 on Sunday afternoon at Gillette State.

All the scoring took place over a 14-minute span in the first half, as Ola Kamara kicked things off in the 20th minute with his seventh goal of the season to tie Justin Meram for the Crew team lead.

Wil Trapp sent a perfectly-weighted, 50-yard pass downfield to Kamara, who evaded Revs center back Tony Delamea and shot from 20 yards out on his first touch, beating keeper Cody Cropper (4 saves) across his body inside the left post to give the Crew (6-6-1) a 1-0 lead.

The Revolution(4-4-4)  tied it up just four minutes later thanks to some great passing as Kelyn Rowe took the ball away from Trapp and advanced it to Lee Nguyen, who forwarded it to Kei Kamara right of goal. Kamara then went across to Fagundez for a tap-in at the left post all over the course of eight seconds.

Fagundez could claim more credit for his second goal in the 34th minute as he played a give-and-go with Kamara and then dribbled in himself the final 35 yards with four Crew defenders in tow before beating keeper Zack Steffen with a low side-footed shot by the left post again.

Midfielder Gershon Koffie subbed on at halftime for Femi Hollinger-Janzen to make his first appearance for the Revs since being loaned to his old club from Swedish side Hammarby on May 8.

Revs right back Andrew Farrell was sent off in the third minute of second half stoppage time for a heavy tackle on Waylon Francis, but it was too late for the Crew to take any advantage.

The Revolution will spend Memorial Day weekend in New York, playing at the Red Bulls on Saturday followed by New York City FC at Yankee Stadium next Wednesday. The Crew will head north of the border to play Toronto FC at BMO Field on Friday before kicking off June back at home against the Seattle Sounders the following Wednesday.

Fagundez has now registered 22 shots and 13 on target over the last six games, including three more on frame against the Crew. Fagundez has always been something of an enigma who has the potential to take the Revs offense from good to great. He deserves some blame for his inconsistency, but when Fagundez is on form, the Revolution win more often than not.

The Revolution showed good response after going down 20 minutes in and swung the momentum back in their favor with Fagundez’s first goal. It was also representative of the potential of players such as Rowe, Nguyen and Kamara combining to set up a chance in Jay Heaps’ diamond formation.

The Crew actually didn’t play particularly poorly out in Foxboro, controlling 64.2% of possession, completing over 100 more passes and putting more shots on goal. Steffen in particularly didn’t handle Fagundez’s long run on the game-winner well, passively allowing him to dribble all the way in for a close-range shot and not closing the angle well enough.