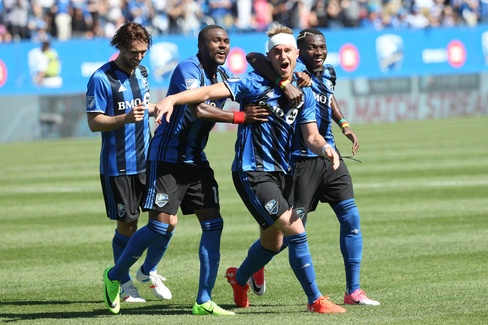 The Montreal Impact made their string of disappointing home results disappear, at least for one afternoon’s time.

Two goals by Ignacio Piatti and two others by Kyle Fisher and Ambroise Oyongo gave the Impact a 4-1 win over a 10-man Portland Timbers team, who saw their Montreal unbeaten streak end at three games.

In his only second game with the Impact, Blerim Dzemaili won his team a penalty at the 12th minute. The Swiss international won the ball back in midfield and played it to Piatti. The Argentinean gave the ball back to his fellow Designated Player, who was taken down in the box by Sebastian Blanco.

Piatti converted the penalty to give the Impact an early 1-0 lead and became the Impact’s all-time leading scorer in the MLS era.

Matters went from bad to worse for the Timbers as in the 18th minute as a straight red card was given to Diego Chara. Along the touchline near the Impact dugout, Chara was fighting for the ball with Piatti and, in a moment of frustration, gave the Impact midfielder a punch to the face following the play.

The Impact added another goal near the end of the first half. After suffering a heavy shock with Fernando Adi a few minutes prior, Fisher headed a corner kick from Dzemaili past Jake Gleeson to give the Impact a 2-0 lead at the 42nd minute.

High on its lead, the Impact were given a cold shower from the Timbers at the 45th minute. Diego Valeri gave his team a chance to climb back in the game by heading an overhead through pass to bring the score back to 2-1 right before halftime.

The Timbers’ late goal didn’t seem to affect the Impact. Five minutes after coming back from the locker rooms, the Impact’s new all-time leading scorer added to his tally. Piatti took his time to launch a heavy shot from the left side of the box to bring the bleu-blanc-noir’s lead back to two goals.

A fourth Montreal goal came by way of an impressive ball recovery by Homegrown player Ballou Jean-Yves Tabla. The 18-year old attacker took the ball from a Timbers defender on the right flank, passed another two and sent the ball across the box for Oyongo. The African Cup of Nations champion netted his first goal of the season and sealed the win for the Impact.

With his early penalty kick goal, Ignacio Piatti passed Marco Di Vaio as the Impact’s all-time leading scorer in the MLS era. However, the Argentinean did not stop there. He added another goal to his tally at the 50th minute to Montreal its two-goal advantage from back in the first half.

An underrated moment of the match happened over the span of a few minutes. Kyle Fisher collides with Fernando Adi and stays down for a fair bit of time before having a headband made for him by the medic team. A few minutes later, the former Clemson Tiger headed his first career goal from a corner kick situation.

With only 18 minutes in the game, a moment of frustration by Diego Chara cost his team immensely. The Colombian hit Ignacio Piatti in the face following a disputed play between both players and made the Timbers play with 10 men for a large portion of the match.