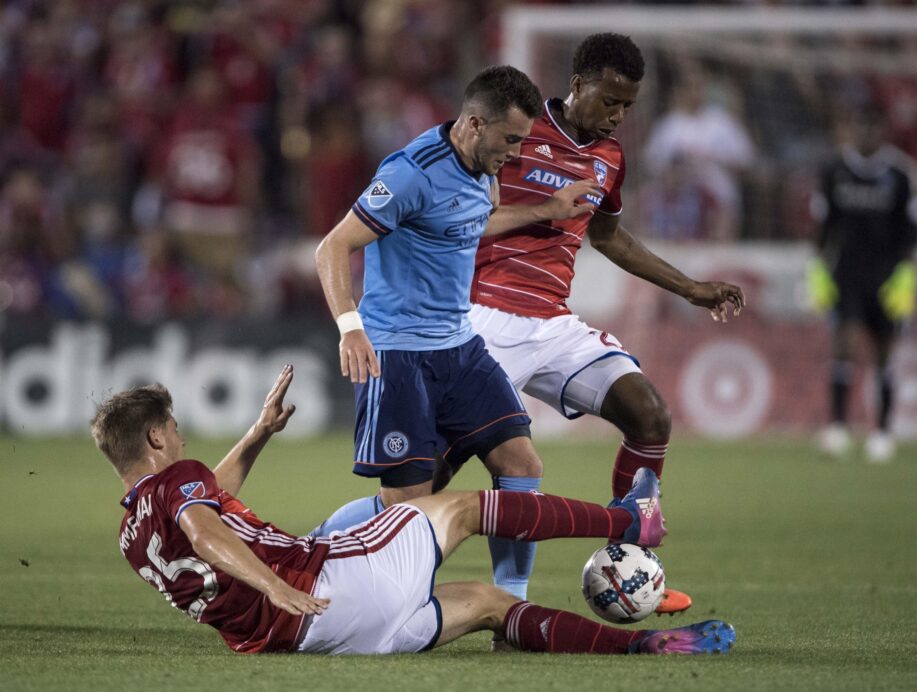 Both teams were tough throughout but a strong second half performance from New York City FC assured that the points would be shared between themselves and FC Dallas on Sunday.

While there were goals in the 1-1 tie, this was a night for the goalkeepers in Dallas. Jesse Gonzalez and Sean Johnson had big nights in goal as the unbeaten run continues for FC Dallas.

Kellyn Acosta broke the deadlock in the 20th minute with an aware run into the box. Micheal Barrios played a cross on the ground which found Maxi Urruti. Urruti then played a deft touch to Acosta, which he fired past Sean Johnson for his third goal of the season.

There was a scary moment for FC Dallas in the 26th minute when Acosta and Matt Hedges had a head-to-head collision going for a ball. Acosta returned to the field of play almost immediately while Hedges spent some time on the sidelines. He ended up returning to the game after being bandaged and getting a wardrobe change.

Urruti came close to doubling Dallas’ lead in the 53rd minute but he was denied by a fingertip save from Sean Johnson. Even with the save, it took the underside of the post to keep Urruti off of the scoresheet.

NYCFC would equalize in the 68th minute through Tommy McNamara. After the team won a free kick, David Villa stepped up to take it and fired a shot at Gonzalez. Gonzalez made the save but it landed in front of McNamara who ran, or stumbled, into the back of the net with the ball. The goal was McNamara’s second of the year.

The tie will push FC Dallas into a three-way tie atop the Western Conference along with Sporting Kansas City and the Houston Dynamo. NYCFC will end the night in fourth place in the Eastern Conference ahead of a midweek match with  Real Salt Lake. FC Dallas will be back in action next Saturday against the San Jose Earthquakes.

There were good individual performances on both sides in this one but Kellyn Acosta’s star shined the brightest. Acosta’s goal may have mattered the most on the scoresheet but it was his strong defensive shift that stymied the attack of New York City FC. Combined with Carlos Gruezo in the midfield, Acosta made sure that NYCFC had a tough time playing centrally.

On a breakaway chance, Christian Coleman was unable to open his MLS scoring account. In the 71st minute, Coleman could have turned the tide back in FC Dallas’ favor but Sean Johnson had other plans. Johnson used a strong right hand to deny Coleman, ultimately preserving the draw for New York City FC.

This was a tough one but Maxi Moralez was marked out of the game by Dallas. While his energy has been important to New York recently, FC Dallas showed that if a team can stop him, NYCFC will struggle. How Moralez bounces back against physical defenses will be important to watch moving forward.