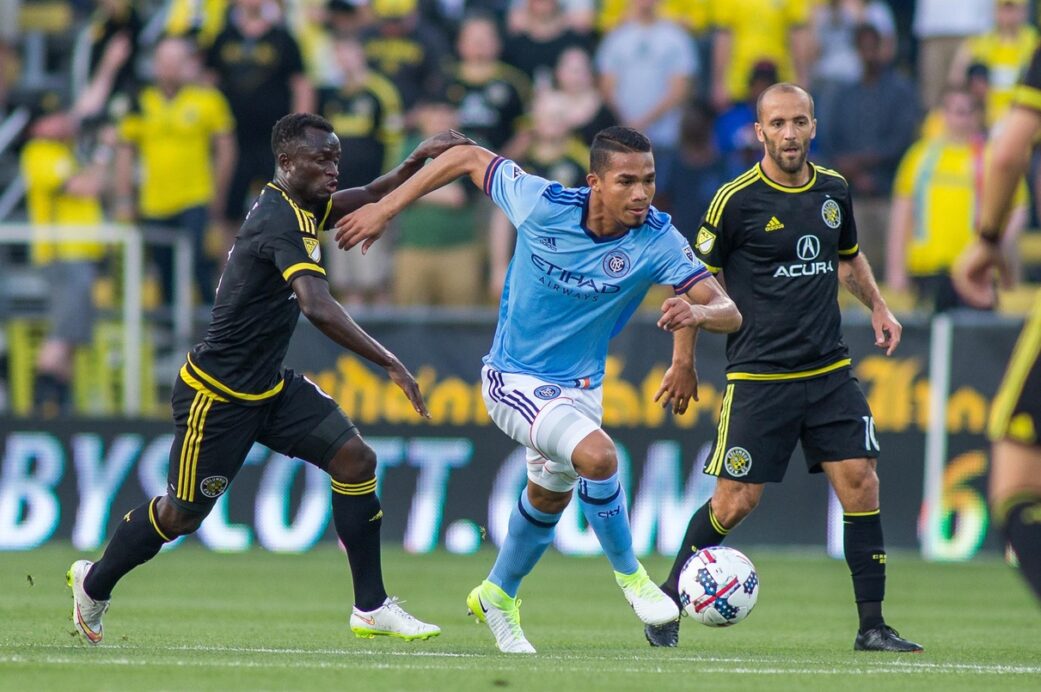 With an empty MAPFRE Stadium and select flood lights extinguished following New York City FC’s come-from-behind victory over Columbus Crew SC, Andrea Pirlo was running sprints. The midfield maestro with no goals and no assists through eight matches joined teammates in the post-game fitness ritual for those who had contributed limited minutes or none at all. Pirlo was a member of the latter category.

“He is a year older,” said Vieira after the match. “There will be situations where we want to be a little more secure defensively in certain areas and that was the case tonight.”

Pirlo is 37 years old and in the recently revealed MLS salaries, will earn a team-high $5.9 million this season. 19-year old prodigy Yangel Herrera, the man Vieira selected ahead of Pirlo to provide better balance and more bite on the defensive side of the ball, scored on a brave header to equalize the match at 2-2 and then assisted MLS Player of the Week Jack Harrison on the game deciding finish in a 3-2 triumph.

Manchester City manager, Pep Guardiola, signed Herrera in January. If not for work visa requirements, the Venezuelan international would be under the auspices of the City Football Group’s principal club. Instead, he is on loan to NYCFC receiving guidance from a coach who achieved legendary status at Arsenal in a similar midfield position.

“Going forward, I would say he has more quality than me,” said Vieira with a chuckle. “He’s a really interesting player. He has the quality and talent to do well in this league. He showed that against Columbus. We are going to lose him for awhile but we’re going to try to keep him here as long as we can.”

Following the Atlanta United match this Sunday, Herrera will depart for South America to join his teammates in preparation for the U-20 World Cup. Depending on results, NYCFC’s lone teenager will miss a minimum of four matches.

Will Herrera be in the starting XI on Sunday?

“He’s going to get involved in the game,” answered Vieira.

In the opening match at Orlando City, Jack Harrison was thwarted on a certain goal at the top of the six-yard box. NYCFC lost, 1-0. Two weeks later at Yankee Stadium, Harrison cleared the bar with a sitter in nearly the identical spot. That match against the Montreal Impact ended 1-1.

After the Impact failure Harrison admitted that he sensed excitement as he prepared to shoot. Six weeks later his calm, clever chip over Zach Steffen to open the scoring at Columbus illuminated a more relaxed Harrison in the goal scoring chamber.

“It’s something I’ve been working on the last several weeks,” said Harrison. “Just trying to feel more comfortable in front of the net. I tried a couple of things in practice, trying to slide it on the floor and it hasn’t really come off that well. It just kind of came to me and I thought I’d try it (the chip).”

Harrison scored again in the 76th minute – the eventual winner and his first multi-goal effort for NYCFC.

In his brief time with the club, Harrison has provided consistent value. NYCFC won 52 percent of the matches Harrison played in 2016 compared to 31 percent when he was absent. With the MLS Rookie of the Year nominee on the field, NYCFC averaged 2.0 goals per match while limited to 1.5 without him. He has played all but 35 minutes in 2017.

“There’s no doubt he has the quality to play in Europe,” said Vieira. “Now, it is how much he will want it, working every single day to be a better player and that will dictate where and which level.”

Left back Ben Sweat made his MLS debut at Columbus against the team that drafted him in 2014.

“It was very emotional to go back there to know some of the staff and the players,” said Sweat.

Vieira thought those sentiments may have led to an early booking after Sweat took down Ethan Findlay.

“I think you put this on the emotional side, it was quite tough for him,” said Vieira. “But when he got the yellow card I think that calmed him down a little bit and he got really focused on what he had to do on the field.”

“When you get a card that early, you always have to be one step ahead,” added Sweat. “You don’t want to be stuck in a position where your only option is to foul.”

Despite those constraints, Sweat pushed into the attack to assist on Herrera’s tying goal – with his non-dominant right foot.

“Players are going to overplay you and know you’re going to your left foot,” said Sweat. “It’s an advantage to cut back and be able to use your opposite foot which I should be doing more often – I think I will after that.”

Villa On the Mound

Reigning MLS MVP, David Villa, signed a one-year contract extension on Tuesday – the same day he tossed the first pitch prior to the Yankees-Blue Jays game in the Bronx.

“It was very nice, I was actually impressed,” said Sweat who pitched in high school. “It was right there – a strike for sure.”

Vieira did not see the pitch but was well aware of the new contract and continues to be impressed with Villa’s transition from his native Spain.

“When you come to a new country you need to adapt,” said Vieira. “You can see how David learned the language and lives the life in the USA with his family. You can see there is a love for the city as well.”

Down on the Farm

16 year old James Sands, likely to become NYCFC’s first Homegrown player, is anchoring a U.S. back line that has helped deliver four clean sheets in five matches at the CONCACAF U-17 Championships in Panama City. The latest, a 3-0 triumph over Honduras, has placed the U.S. in a position to clinch a spot in the World Cup with a win, draw or loss by fewer than four goals in Friday’s match versus Cuba.

Meanwhile, U-16 NYCFC Academy stalwarts, Joseph Scally and Giovanni Reyna, influenced the U.S. U-15 National Team in a 2-1 victory over England in the Finals of the Torneo Delle Nazioni in Italy. Down 1-0, Scally scored the equalizer and Reyna tallied the winner.