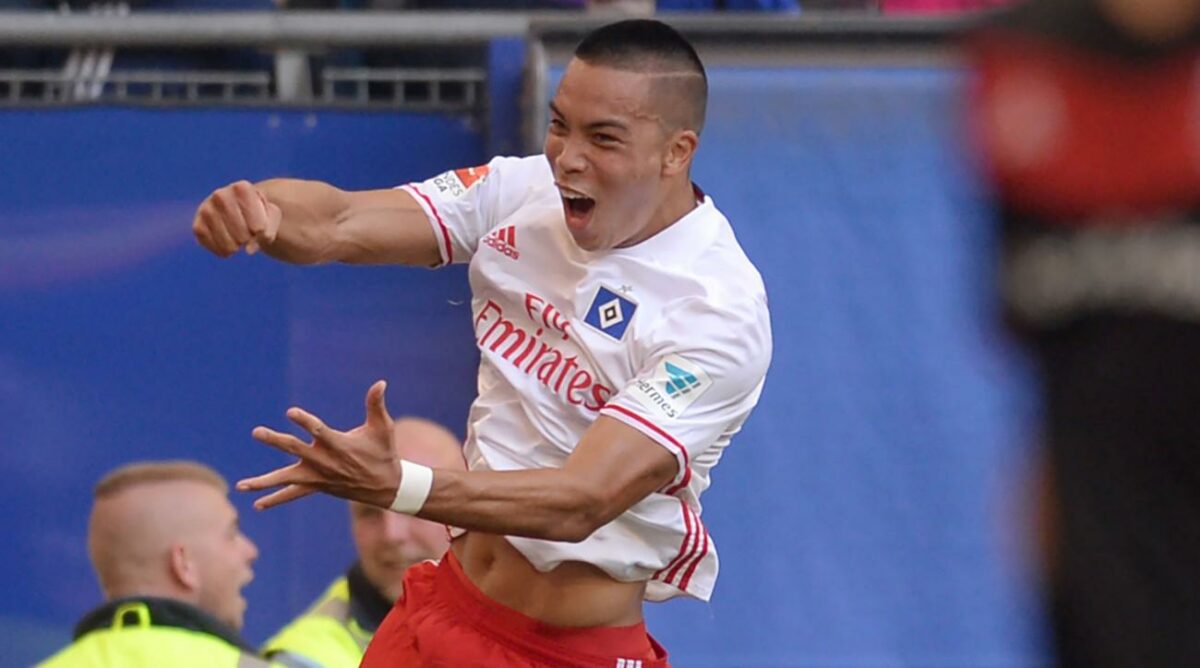 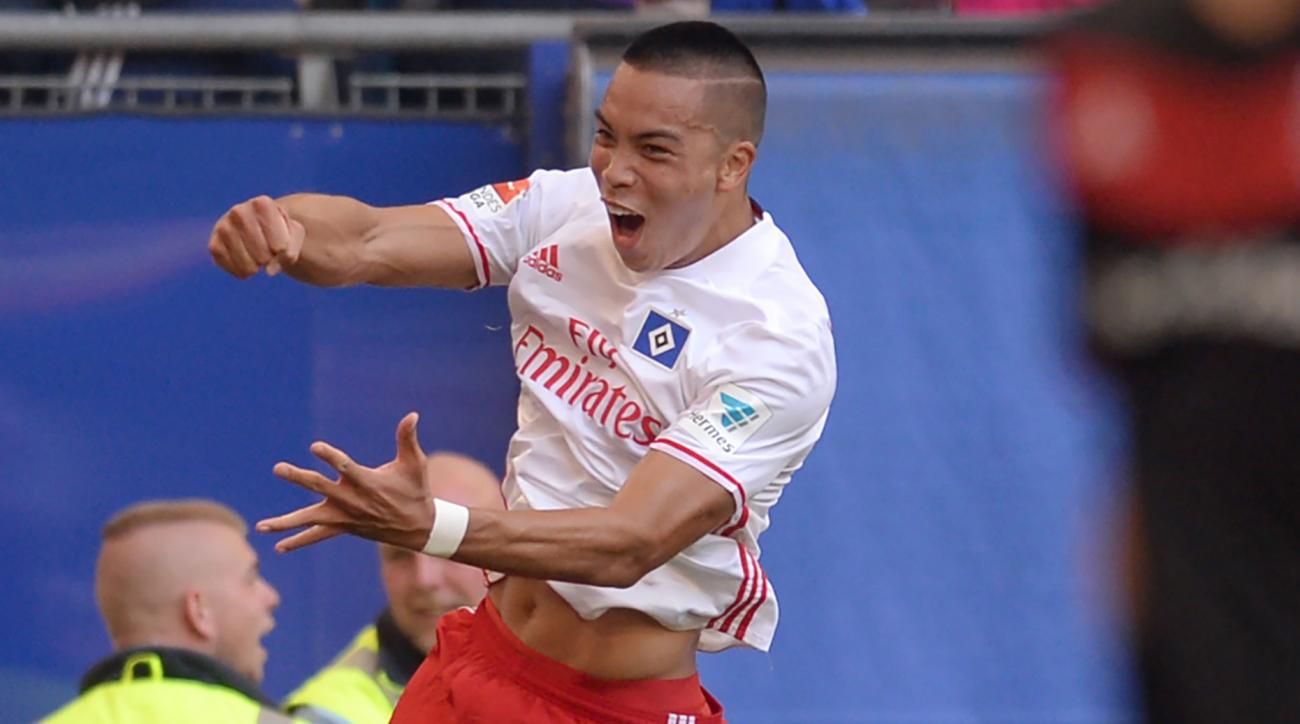 Hamburg knew a victory on Saturday over visiting Wolfsburg would see them retain their German top-flight status for another season.The hosts did just that by defeating their visitors, 2-1, at the Volksparkstadion in dramatic fashion.

A 88th-minute winner from Gian-Luca Waldschmidt earned Hamburg a massive three points which pushed them out of relegation playoff place, and dropped Wolfsburg in.

However it was the visitors who started off in front as Robin Knoche headed in for the visitors after 23 minutes. Filip Kostic’s one-time volley drew Hamburg level after 32 minutes, making it 1-1 at halftime. Moments after coming on, Waldschmidt scored his first goal of the season, which proved to be the winner, and saved Hamburg from a two-legged playoff. The hosts finish the season in 14th, while Wolfsburg now face second-tier side Eintracht Braunschweig in a two-legged playoff starting on May 25.

Here’s a closer look at all Friday and Saturday’s European action:

Espanyol concluded their season a high-note, defeating Granada, 2-1, away from home. Leo Baptistao opened the scoring after three minutes, scoring his sixth goal of the season. An own goal off of Ruben Vezo, doubled Espanyol’s advantage just five minutes later. Andreas Pereira’s curling effort after 22 minutes pulled Tony Adams’ side to within one, but that was the closest the hosts would get. Despite edging Espanyol, 7-3, in shots on goal, Granada suffered defeat for the 26th time this season in league play. The hosts end the season last in the La Liga table, and will play in the second-tier next season. Espanyol finishes the campaign in eighth, missing out on Europe by seven points.

Sporting Gijon and Real Betis shared the points at the Estadio El Molinon on Saturday, drawing, 2-2. A 79th-minute equalizer from Carlos Carmona earned the hosts a point in their final top-flight match of the season. Carmona assisted on Gijon’s opener, a seventh-minute finish from Douglas to make it 1-0. Ruben Castro drew Betis level after 22 minutes, making it 1-1. The forward doubled his tally on the day, finishing off Petros assist in the 59th minute. However, Carmona’s seventh goal of the season earned the hosts a point. Betis finish the season in 15th, with 39 points, while Gijon is relegated to the second-tier.

Borussia Dortmund clinched a third-place finish on Saturday, defeating Werder Bremen, 4-3, at Signal Iduna Park. Braces from both Marco Reus and Pierre-Emerick Aubameyang propelled Thomas Tuchel’s side to the win. Aubameyang stamped the three points, scoring on a 89th-minute penalty. However, Bremen led early after Zlatko Junuzovic scored seven minutes in. Reus drew Dortmund level in the 32nd minute, before Aubameyang’s first goal of the day made it 2-1 before halftime. Fin Baretls tapped home Bremen’s equalizer a minute into the second-half before Max Kruse’s 15th league goal put the visitors ahead after the hour mark. Reus drew Dortmund level at 3-3, scoring from the penalty spot after drawing a foul from Serge Gnabry. Aubameyang sealed the victory, and the Golden Boot award, by scoring the winner just before stoppage-time. Dortmund finishes third, while Bremen misses out on Europe by four points.

FC Koln clinched a spot in next season’s Europa League after a 2-0 victory over Mainz on Saturday. Peter Stoger’s side received a 43rd-minute winner from defender Jonas Hector which put Koln ahead 1-0 at halftime. Yuya Osako doubled the hosts lead in the 87th minute, clinching them a fifth-place finish in the standings. It also gives Koln their first European appearance in 25 years, which saw fans invade the pitch in celebration. Koln ends the year with 49 points, while Mainz remaind safe in the top-flight for another season.

Bayern Munich ended the season on a winning note, defeating visiting Freiburg, 4-1, at the Allianz Arena. Arjen Robben sparked the hosts scoring an early goal, while also chipping in two assists. Robben opened the scoring after four minutes, which would give Bayern a 1-0 lead in the first-half. Arturo Vidal’s curling effort doubled Bayern’s lead after 73 minutes, although Freiburg pulled to within one just minutes later. Franck Ribery made it 3-1 in stoppage-time, finishing off Robben’s second assist of the match, before Joshua Kimmich added Bayern’s fourth with the final kick of the match. Freiburg misses out on Europe by a point, while Bayern finishes the season with 82 points.

Braces from both Mohamed Salah and Stephan El Shaarawy propelled Roma to a dominant 5-3 road win at Chievo Verona. The sides were deadlocked at 2-2 going into the halftime break. Lucas Castro opened the scoring after 15 minutes before El Shaarawy drew the visitors level in the 28th minute. Roberto Inglese put Chievo ahead 2-1 after 37 minutes only to see the lead last five minutes. Salah’s 42nd-minute finish drew Roma level for the second time. El Shaarawy’s second goal of the match made it 3-1 after 58 minutes before goals from Salah and Edin Dzeko put the match out of reach at 5-2. Inglese netted his second of the day in the 86th minute, but it proved to be a late consolation goal. Roma sits a point behind leaders Juventus ahead of the Old Lady’s match vs. Crotone on Sunday. Chievo sees a three-match unbeaten run snapped with the defeat.

Napoli remained alive in the Serie A title race with a 4-1 demolition of Fiorentina at the San Paolo. A brace from Dries Mertens helped pad the lead for Napoli, who lead, 2-0, at halftime. Goals from Kalidou Koulibaly and Lorenzo Insigne had the hosts up after 45 minutes. Mertens extended the lead to 3-0, scoring following a corner kick. Josip Ilicic’s fifth league goal of the season, gave Fiorentina a lifeline after 60 minutes. However, Mertens slammed the door on any comeback, scoring his second of the afternoon. Fiorentina saw a two-match unbeaten run snapped with the loss, while Napoli remains in third.

The top fixture of the final round in France saw Lyon and Nice share the points in a 3-3 draw. A 94th-minute penalty kick from Jean Michael Seri drew Nice back for the third time on Saturday, earning an impressive road point.  A zc10th-minute own goal by Maxime Le Marchand gave Lyon a 1-0 lead. Anastasios Donis drew Nice level five minutes later, scoring with a left-footed effort. Lacazette’s right-footed finish after 48 minutes put Lyon back ahead, this time 2-1. Donis’ fourth goal of the season pegged Nice level again, this time after 69 minutes. Lacazette’s 26th league strike looked to have earned the hosts all three points. However, Seri slotted the tying penalty in stoppage time, after Bassem Srafi drew a foul in the box. Lyon finish the campaign in fourth, good for the final European spot. Nice finish nine points better off, and will be in the UEFA Champions League qualifiers this summer.

After claiming their first Ligue 1 title since 2000 earlier this week, Monaco signed off with a 3-2 road win at Rennes. Fabinho gave Monaco a 1-0 lead going into halftime, scoring his ninth league goal of the season. Jemerson headed in Monaco’s secondgoal early in the second-half from a corner. Adama Diakhaby pulled Rennes to within one, scoring on a 69th-minute penalty kick. A long-range strike from defender Jorge added to Monaco’s lead after 78 minutes. Diakhaby’s second goal of the match, made it 3-2, but that was the closest Rennes would come to a comeback. Monaco finish the season with 30 league wins, three better off than second place PSG. Rennes end the season in a comfortable ninth place.

Here are all of Saturday’s Ligue 1 fixtures: