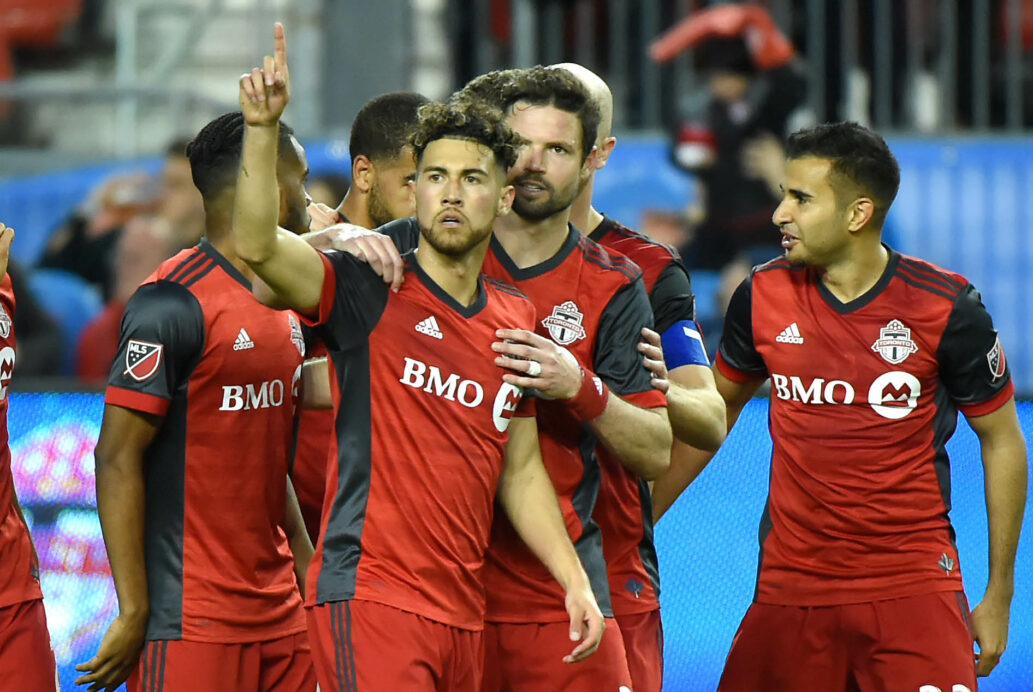 It was a good weekend for the lower end of the rankings, as the bottom three of last week all found themselves on the winning side of 1-0 results.

The Colorado Rapids, Real Salt Lake, and D.C. United all ended up winners in their respective matches. Truth be told, it was a good week for the entire bottom-half in general at the expense of the top. Every team ranked No. 17 or lower last week won their matches, frequently against top half opposition.

The losers of that top half ended up being Nos. 2, 3, and 4 as FC Dallas, New York City FC, and Sporting Kansas City all suffered defeats. Things at the very top remain unchanged, however, as Toronto FC reaffirmed their dominance with a 5-0 thrashing of the Columbus Crew.

OUTLOOK: No Giovinco or Altidore? No problem for TFC, which destroyed the Columbus defense despite missing its two biggest attacking weapons. Victor Vasquez continues to impress as one of the league’s best newcomers, while Jonathan Osorio reminded us that he isn’t a player to be forgotten. Replacing Michael Bradley this week while he’s on international duty will be a tougher task, but his absence should pave the way for Benoit Cheyrou and Mikey Delgado to pick up the slack in central midfield.

OUTLOOK: The Chicago Fire are for real this season, and they continue to prove that with last weekend’s strong 2-1 victory over FC Dallas. The win was the Fire’s sixth at home in seven matches and keeps them unbeaten there. The struggles have come on the road, where they now travel to Orlando City, who’s fortress has crumbled a bit in recent weeks after suffering their first loss in their new building. Can the Fire take advantage?

OUTLOOK: Things have cooled off in recent weeks for FC Dallas. A midweek loss to the Chicago Fire, their second of the year, and a weekend draw against the Dynamo leave FCD without a win in their last four. Despite this, they remain in strong position just two points behind Sporting Kansas City but with two matches in hand. They can catch up this weekend against Real Salt Lake.

OUTLOOK: Atlanta United did well to flip their 3-1 defeat to New York City FC the first time around into a 3-1 victory the second time. Miguel Almiron continues to heat up as the season enters the long summer stretch, scoring goal after goal for resurgent Atlanta after their lackluster late-April/early-May efforts. He’ll take his boots up north to Canada this weekend as Atlanta take on the Vancouver Whitecaps.

THIS WEEK: vs. New England Revolution on Wednesday; vs. Philadelphia Union on Saturday.

OUTLOOK: Atlanta United got their revenge on New York City FC last weekend, flipping the previous meeting’s scoreline in their favor. For NYCFC, it means they conclude their four-match road trip with just four points from 12 possible. Thankfully, a return home is in order with two matches at Yankee Stadium this week. They’ll need to cope with several absences due to injury and suspension in order to earn the maximum this week.

OUTLOOK:  A terrible loss for Sporting Kansas City, as they were locked down and shut out by the league-wide basement dwellers in their 1-0 defeat at the Colorado Rapids last weekend. The loss continues a bad trend for Sporting KC on the road, who have just one win through eight matches away from home. Thankfully they return to that fortress of a home this weekend and look to remain unbeaten there against Minnesota United.

OUTLOOK: It was a downright outburst from the Galaxy attack in Saturday’s 4-2 victory over the San Jose Earthquakes. Prior to Saturday’s match, the Galaxy had averaged just over 1.3 goals per match with an anemic-looking attack, but it all came together for Gio dos Santos and company in a morale-boosting win. Now the Galaxy will hope to continue their success against one of the few teams with fewer goals scored than them as they visit D.C. United.

THIS WEEK: vs. D.C. United on Wednesday; vs. Chicago Fire on Sunday.

OUTLOOK: Orlando City, who started the season so hot, have now gone six straight without a win, including four losses. In their two home matches during that stretch, their perfect start in Orlando City Stadium came to an abrupt end with a draw and loss. Despite this, they’ll need to double-down on their home efforts this week as they take on both D.C. United and the Chicago Fire in hopefully sunny Florida.

THIS WEEK: at Portland Timbers on Friday.

OUTLOOK: There were a lot of goals in Los Angeles on Saturday night, but unfortunately for the Earthquakes, they tended to end up in the wrong net. Despite notching two, the Quakes defense suffered greatly as they surrendered four goals to the previously listless Galaxy. Was it an aberration in an otherwise solid defensive year so far? Or was it indicative of a larger issue? They’ll hope its the latter as they take on the Portland Timbers this weekend.

THIS WEEK: vs. Seattle Sounders on Wednesday; at Colorado Rapids on Saturday.

OUTLOOK: Speaking of aberrations, prior to Friday night the Crew had only let up three goals twice all season. That was before Toronto FC absolutely demolished their defense in a 5-0 beat-down, despite lacking Giovinco and Jozy Altidore. The Crew don’t have a moment to catch their breath, as their double-action this week sees them welcome the Sounders on Wednesday before traveling west to visit to Rapids.

OUTLOOK: There were celebrations at Red Bull Arena last weekend as the Red Bulls snapped their four match winless streak with a come-from-behind 2-1 win over the New England Revolution. While questions remain about the team’s performances of late, three points is always a welcome sight in a talented Eastern Conference. Now the Red Bulls aim to take another three points, this time on the road against the Impact.

THIS WEEK: vs. Real Salt Lake on Wednesday; at Seattle Sounders on Sunday.

OUTLOOK: Neither team could assert themselves in an all-Texan affair on Sunday, as the Dynamo drew Dallas in a scoreless sleeper. The Dynamo will emerge perhaps feeling the better of the two, however, having earned a point in their in-state rival’s house. They’ll take that positivity with them back home Wednesday against Real Salt Lake, before hopefully carrying it through to their visit with the Seattle Sounders on Sunday.

OUTLOOK: Winning at home is the cornerstone of any successful MLS season, and because of that the Whitecaps will certainly be unhappy with their shutout loss at home against D.C. United. Compounding their frustration is Tuesday’s Canadian Championship loss to the Montreal Impact. Luckily, they’ll have a chance to rectify their home disappointment as they welcome Atlanta United and the red-hot Miguel Almiron.

THIS WEEK: vs. San Jose Earthquakes on Friday.

OUTLOOK: It always tastes bitter to walk away with a loss. It tastes even worse to walk away with a loss to your biggest rivals to extend your winless skid to five straight matches. The Portland Timbers surely feel bitter with their lack of recent success as they’ve found themselves sinking down the Western Conference standings. They’ll need to turn things around with a victory at home on Friday against the Quakes and their potentially weakened defense.

THIS WEEK: at New York City FC on Saturday.

OUTLOOK: Just like that, the winning streak comes to an end. Real Salt Lake shut down the grooving Union in a 1-0 shutout victory, sending them to the negative side of a .500 record. The Union have just one road win in their first six this year, and they’ll remain on the road this weekend as they visit New York City FC at Yankee Stadium.

THIS WEEK: at Columbus Crew on Wednesday; vs. Houston Dynamo on Sunday.

OUTLOOK: Two straight 1-0 wins and the Seattle Sounders suddenly find themselves in the thick of the playoff chase once again. A good shutout victory over their Cascadian rivals, the Portland Timbers, will bolster the Sounders suddenly solid defense as they seek their third straight in midweek play against the reeling Columbus Crew. They’ll then return home to take on the Houston Dynamo.

OUTLOOK: Orlando City has struggled away from home and the Loons of Minnesota United took full advantage on Saturday in their shutout, 1-0 victory. The win leaves the Loons just three points out of a playoff spot, a seemingly impossible goal just a few weeks ago, as they enter their weekend clash with Sporting Kansas City. While Sporting KC is coming off a disappointing loss to the Colorado Rapids, they’re an entirely different monster at home and will provide a tough challenge for a Loons team still trying to find their feet.

THIS WEEK: at New York City FC on Wednesday; vs. Toronto FC on Saturday.

OUTLOOK: The Revs have to be disappointed with Saturday’s loss to the Red Bulls. Despite seizing a lead early on, the Revs couldn’t hang on and ended up surrendering two unanswered goals to drop all three points on the road, leaving them winless so far this year away from home. It gets worse before it gets better, as the Revs remain on the road against NYCFC in midweek play before finally returning home to face Toronto FC on Saturday, in the midst of an eight-match unbeaten run.

THIS WEEK: at Orlando City on Wednesday; vs. LA Galaxy on Saturday.

OUTLOOK: D.C. United has been poor offensively to start the year, but when you only need one goal to win, that isn’t the end of the world. DCU went up to Canada and defeated the Vancouver Whitecaps 1-0 last weekend, as their lackluster offense was carried by a strong defensive performance. They’ll either need to do the same or figure out how to score this week when they first visit Orlando City and then welcome the LA Galaxy in a double-action slate.

THIS WEEK: at Houston Dynamo on Wednesday; at FC Dallas on Saturday.

OUTLOOK: Real Salt Lake welcomed the red-hot Philadelphia Union to town on Saturday and sent them home ice-cold as the hosts earned a shutout, 1-0 victory to put an end to the visitor’s winning streak. The win continues RSL’s rebound, as they’ve now won two of their last three. They’ll have a difficult time keeping it going, however, as they travel to Texas for a double-week of in-state action taking on the Houston Dynamo and FC Dallas.

OUTLOOK: Though off in MLS play over the past week, the Montreal Impact did battle it out in the Canadian Championship. After falling behind 2-1 after the first leg vs. the Vancouver Whitecaps, the Impact dominated at home en route to a 4-2 (5-4 aggregate) victory. That confident performance will carry them into this weekend’s return to MLS action as the New York Red Bulls come to town in an Eastern Conference semi-finals rematch.

OUTLOOK: Though the Rapids have been solid at home, and Sporting Kansas City weak on the road, the basement-dwellers defeating the conference leaders is still a surprising sight. The Rapids shut out Sporting KC at home in last weekend’s 1-0 victory. While still a terrible 0-6-0 on the road, the Rapids get to defer the problem at least one more week as they remain at home against the shell-shocked Columbus Crew.